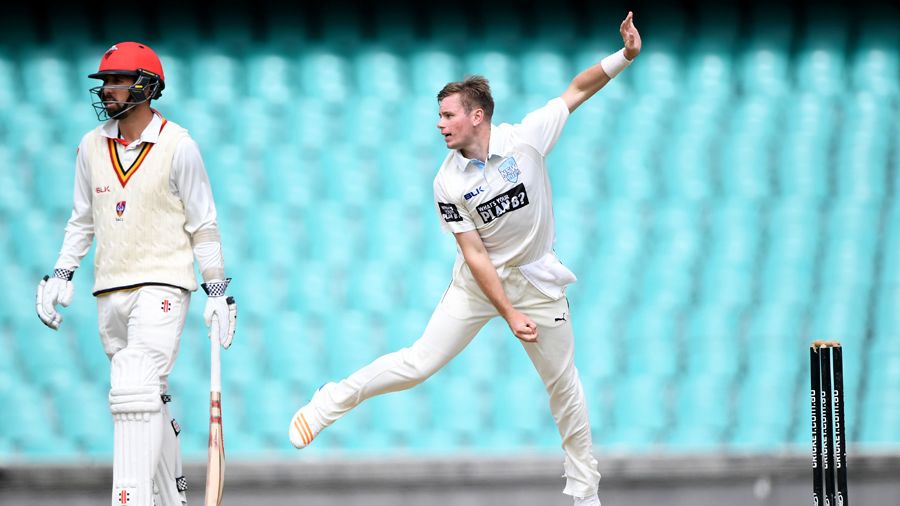 Mason Crane was selected for New South Wales in 2017, but opportunities for England players in the Shield have been few and far between

Tom Harrison, the ECB’s chief executive, has made a formal proposal to Cricket Australia encouraging them to involve young English players in the Sheffield Shield. Harrison, who arrived in Australia as the inquest into another Ashes drubbing for England kicked into gear, said in an interview with the BBC’s Test Match Special that he had made a request for the same to CA.

“The reality is we need to be spending a lot more time with players in Australian conditions,” Harrison said. “I’ve had a number of conversations with Cricket Australia and have written formally to Cricket Australia to ask if they would consider allowing us to put players into Sheffield Shield cricket, for example, as one significant change that we can bring to bear.

“We’ve had to cancel a lot of individual player preparation plans – which would have involved time in Australia – due to the pandemic, because effectively Australia has been closed, and a number of other tours that were planned to enable us to get in better shape for this tour have had to be shelved.”

Australia cricketers are regularly signed as overseas players in county cricket, with Marcus Harris, Marnus Labuschagne, Travis Head and Michael Neser among those involved in the 2021 County Championship.

But with fewer teams in the Shield – only six compared to the 18 counties in the Championship – reciprocal opportunities for England players have been few and far between; when Mason Crane was selected for a single game in 2017, he was New South Wales’ first overseas player since the 1980s.
Isa Guha, the ex-England international and current broadcaster, drew parallels last month with the Big Bash League, which has featured 18 England signings this season.

“There’s a few good cricketers doing well in the BBL from England, and I think they could have a huge impact on Sheffield Shield cricket as well,” she told News Corp. “Fans and broadcasters want a contest… surely it’s in the interest of Cricket Australia to say, ‘yep, some of your players who are going to be part of the Ashes can come here and play in our Sheffield Shield for a few games.'”

Matt Roller is an assistant editor at ESPNcricinfo. @mroller98