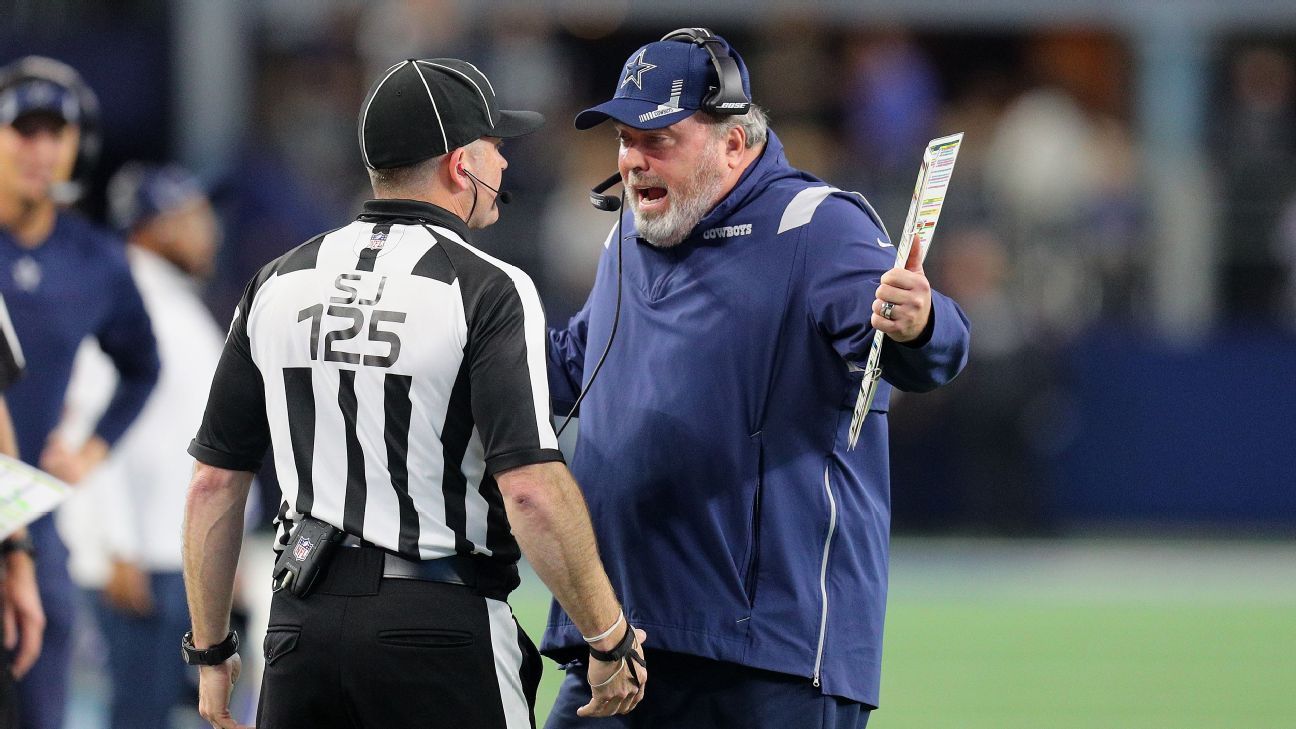 ARLINGTON, Texas — Dallas Cowboys owner and general manager Jerry Jones made it clear he did not pin his team’s 36-33 overtime loss to the Las Vegas Raiders on the officials.

But he also made it clear he wasn’t pleased that they affected the game.

The Cowboys and Raiders were each penalized 14 times in Thursday’s Thanksgiving Day game. The Cowboys were awarded a franchise-record 166 yards off those penalties; the Raiders 110. In the third quarter, Cowboys cornerback Kelvin Joseph and Raiders safety Roderic Teamer were ejected following a scuffle out of bounds after a punt.

The final swing of the game came on a 33-yard pass interference penalty on Cowboys cornerback Anthony Brown, who did not turn around for a deep pass thrown by Derek Carr on third-and-18 from the Las Vegas 43 that set up the game-winning field goal attempt.

“Well, this probably will be arguably the most watched game other than the Super Bowl, and I hated that it got down to just throwing the ball up and getting your penalties to get your big plays,” Jones said. “And I think we were into that. Now, don’t get me wrong, I’m so proud of our team for the way we hung in, hung in and came back and played, but it’s frustrating for everybody, for all of our fans at this particular time, to have a game that had you on pretty unsure footing as to where you were going to be with your fundamentals, i.e., whether those were going to be called or not. And they got calls, too, so it’s just a little off balance way to play the game.”

But it wasn’t surprising.

In meeting with Mike McCarthy before the game, Jones said there was an anticipation that it would be a high-penalty game. Entering the contest, Shawn Hochuli’s crew threw the fifth-most flags (153) and had the third-highest penalty yardage (1,207) on the season.

“Twenty-eight penalties — I don’t really know what the hell you want me to say,” McCarthy said. “Write whatever you want, I’m all for it.”

The Cowboys have been among the highest-penalized teams in the league all season. They moved into No. 1 in the league after Thursday’s game with 91 for 816 yards. The Raiders are second with 89 for 785 yards.

“It was obviously frustrating,” McCarthy said. “The game was herky-jerky from start to finish. Give our guys credit to continue to focus and battle. The numbers are absurd, definitely understand that. But just like everything in this game there is trends and patterns, and we anticipated this game being officiated this way.

“But in the same breath it’s the line that you have straddle. I don’t want our guys slowing down and playing slower. We’ve tried that already and that didn’t help us overcoaching the penalties a few weeks back. We’re going to get up on the balls of our feet and keep fighting. We’ve got to really focus on our fundamentals and finish plays. We’ll take a hard look at it. We evaluate the penalties every week. We break them down and it will be part of our fundamental emphasis as we get ready for the Saints.”

Brown’s penalties accounted for 91 yards. He is the third player since 2000 to have been flagged four times for defensive pass interference in a single game, joining Trayvon Mullen and Xavien Howard.

Brown called it “one of them days,” although after one breakup in the second quarter he appeared to facetiously look for a flag on him from the officials.

“As a DB, you definitely got to have a short memory, on to the next play,” Brown said. “We’re in it until the end. Unfortunately, that last penalty was crucial. We’ve just got to keep fighting. We can’t control when the ref is throwing flags or not throwing flags. We can’t argue with them because it’s not going to change anything.”

Micah Parsons was called for a roughing the passer penalty when it appeared Carr fell into him.

“I think we should be playing football, not tag,” said the rookie linebacker.

The Cowboys also had a potential fumble recovery overturned in the first half after Jayron Kearse appeared to poke the ball free from tight end Darren Waller. The replay official determined the pass was incomplete, and McCarthy could not challenge.

“I was actually on the sideline with my helmet off celebrating with my teammates,” Kearse said. “I can’t control the call that they make. I can’t control that. We’re just going to keep playing football. To each his own. You can turn the film on and everybody that watches it can see what went on. I haven’t seen the play. I just know from my point of view that I thought he was running with the ball, personally. Like I said, it’s the officiating that we got tonight. We just have to live with it.”