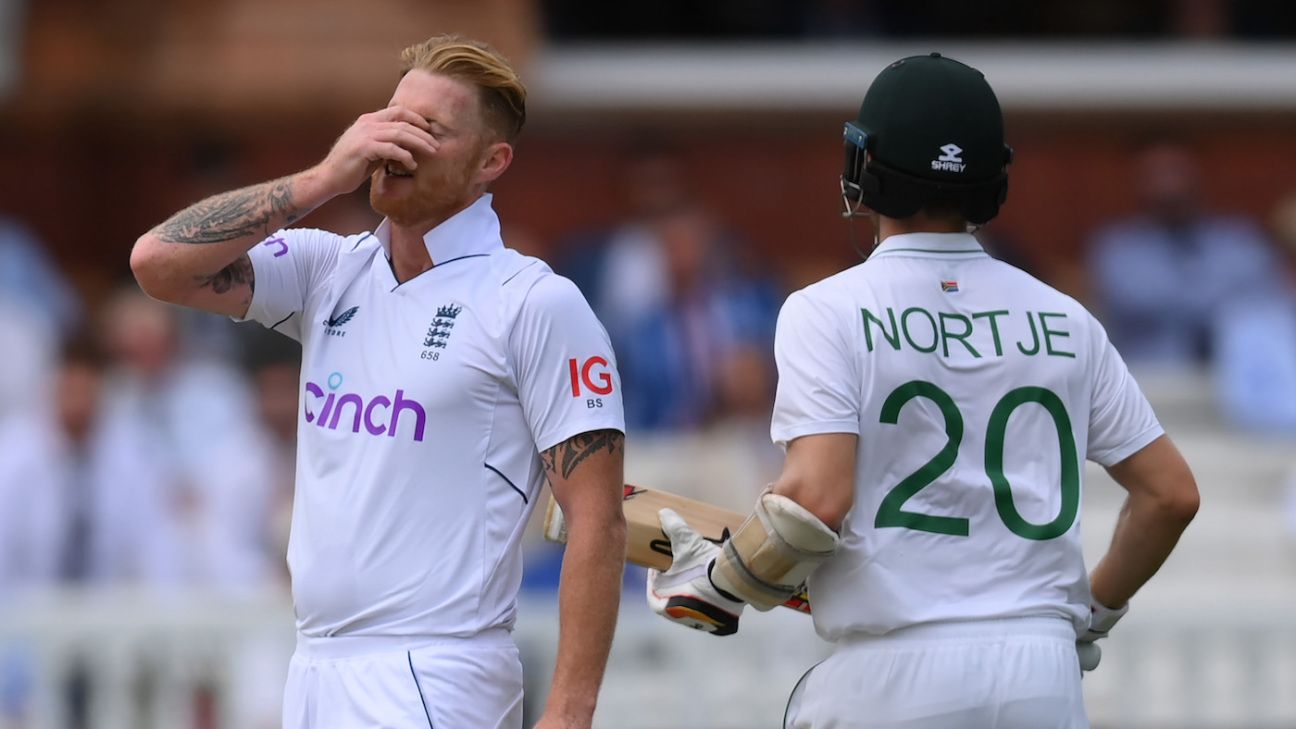 South Africa struck twice before lunch, having taken a 161-run lead on first innings, to plunge England into further trouble on day three of the first Test at Lord’s. Keshav Maharaj removed Zak Crawley and Ollie Pope cheaply – the later via a review off the final ball before the break – as the tourists maintained their grip on proceedings.

It could have been worse for England, who also saw Alex Lees dropped in the slips off Kagiso Rabada, with the home side facing their stiffest Test of the summer after four wins in a row at the start of Ben Stokes’ captaincy.

England claimed a wicket with the third ball of the morning, but that was about as good as it got, as South Africa’s solid batting effort took them to a total almost double that managed by Stokes’ team. Only one player passed 50 for the tourists – opener Sarel Erwee – but nine of the XI reached double-figures to cement a strong position.

The lead was already a handy 124 overnight, but England received a lift in the opening over of the day as Rabada fell to Matthew Potts. Rabada’s firm pull looked to be clearing Stuart Broad at wide mid-on, only for the 36-year-old to pull off a spectacular one-handed catch above his head.

With the second new ball almost due, England might have had thoughts of keeping South Africa below 300. But a sustained short-ball attack against Anrich Nortje, even once the old ball had been traded in, was unsuccessful as the No. 10 helped Marco Jansen add another 29 runs to the total.

Nortje dealt with the barrage capably, despite a couple of half-chances that did not go to hand, and began to push the scoreboard on, driving Ben Stokes sweetly through mid-on from one of the rare balls in his half.

Jansen, batting at No. 6 for the first time, was the more watchful, adding just seven runs to his overnight score before edging Broad to slip just shy of a maiden Test fifty, as England finally reverted to a more orthodox approach. Nortje thumped Stokes for two more fours, before Broad removed Lungi Ngidi via another catch in the cordon – Jonny Bairstow holding on at the second attempt.

There was no let-up for England’s batters second time around, as they attempted to bat their way out of a hole. Lees should have fallen in Rabada’s second over, with an outside edge heading straight for second slip, only for Keegan Petersen to dive across Aiden Markram and put down a much harder one-handed chance.

In the event it was spin that made the breakthrough, as Maharaj struck immediately after coming on to bowl for the first time in the match. Crawley was plumb lbw attempting to sweep his third delivery, and Maharaj had a second a few overs later as Pope went back to one that ball-tracking showed would have hit leg stump.