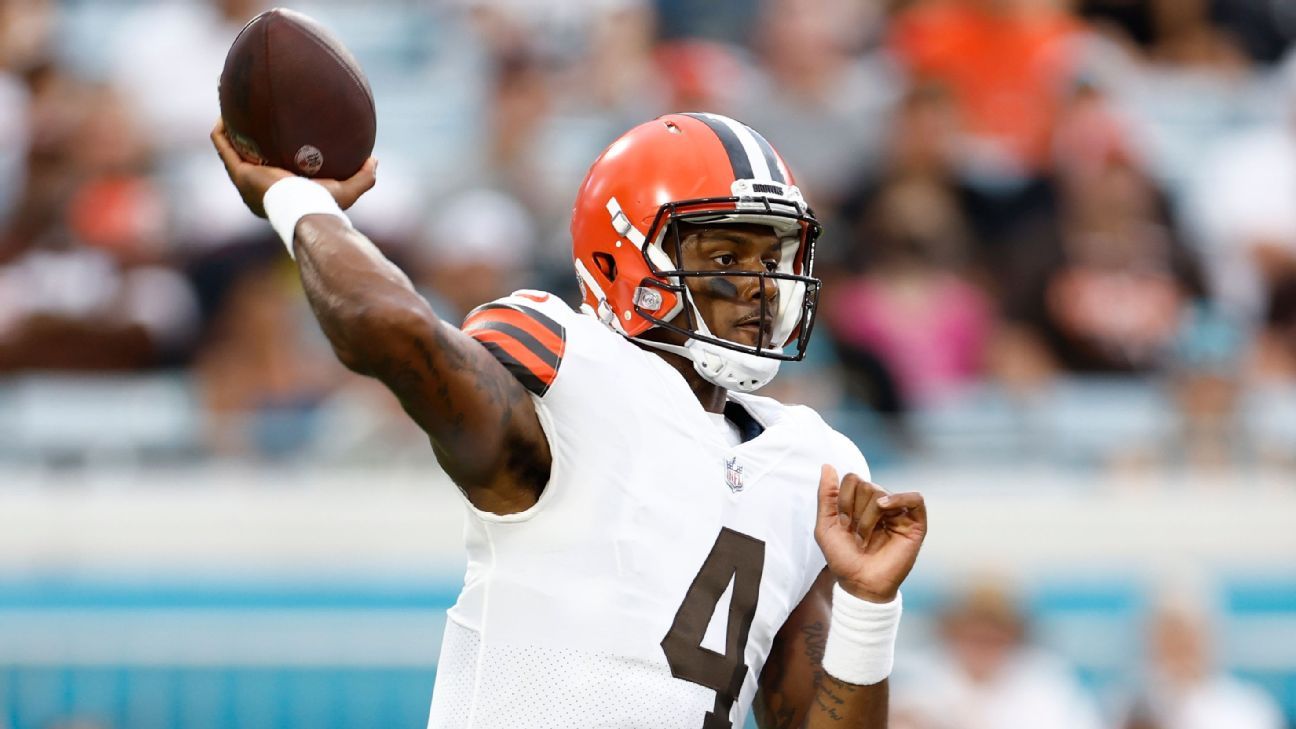 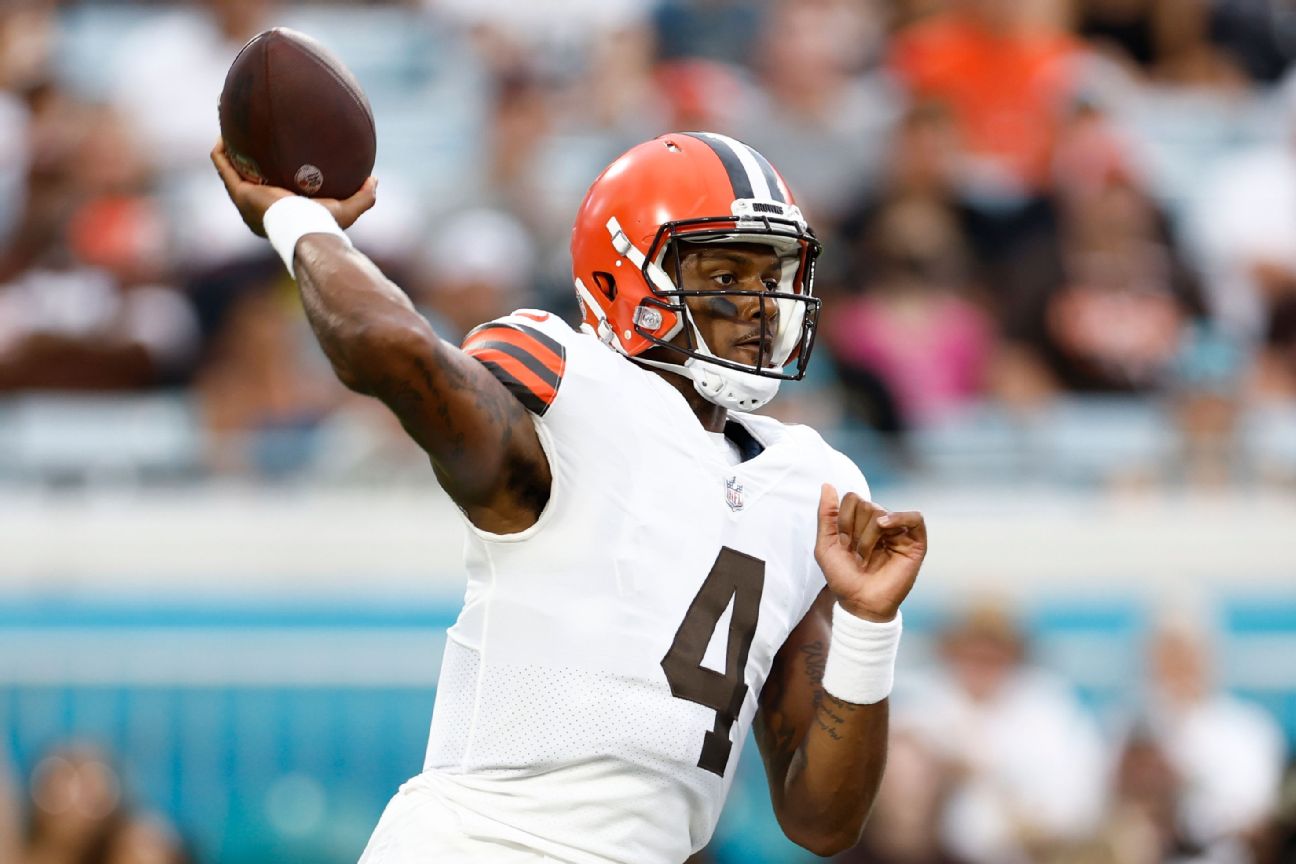 The NFL and NFL Players Association on Thursday reached a settlement in the Deshaun Watson disciplinary matter, agreeing that the Cleveland Browns quarterback will serve an 11-game suspension after he was accused by more than two dozen women of sexual misconduct during massage sessions, a league source told ESPN.

Watson will also pay a fine of $5 million that will go to charity, the source said.

The deal still has not been signed but is agreed upon, a source told ESPN’s Adam Schefter.

Watson will be available to play for the Browns again in Week 13, when Cleveland faces his old team, the Houston Texans, on the road.

The settlement between the two sides heads off a ruling from former New Jersey attorney general Peter C. Harvey, whom commissioner Roger Goodell appointed to oversee the NFL’s appeal of disciplinary officer Sue L. Robinson’s decision that Watson be issued a six-game suspension.

Robinson, an independent arbiter jointly appointed by the league and players’ union, originally ruled on Aug. 1 that Watson would serve a six-game suspension but would not be fined for violating the league’s personal conduct policy, writing in a 16-page report that “the NFL carried its burden to prove, by a preponderance of the evidence, that Mr. Watson engaged in sexual assault (as defined by the NFL) against the four therapists identified in the Report.”

Goodell, in explaining the league’s decision to appeal Robinson’s ruling, said that the evidence called for at least a full-year suspension.

Watson has been accused of sexual assault and other inappropriate conduct during massage therapy sessions in civil lawsuits filed by 25 women. The encounters alleged in the lawsuits took place from March 2020 to March 2021, while Watson was a member of the Houston Texans. One of the 25 lawsuits was dropped after a judge’s ruling in April 2021 that the plaintiffs needed to amend their petitions to disclose their names. Two other women filed criminal complaints against Watson but did not sue him.

Watson has settled or agreed to settle all but one of the remaining lawsuits, which remains pending. In July, the Texans reached settlements with 30 women who made claims or were prepared to make them against the NFL organization for its alleged “enabling” of Watson’s behavior.

Although two grand juries in Texas declined to pursue criminal charges against Watson earlier this year, the NFL had been investigating whether he violated its personal conduct policy since 2021. The league interviewed Watson over multiple days earlier this summer. The NFL’s investigators also spoke to several of the women.

In her report, which concluded Watson violated the personal conduct policy with “egregious” and “predatory” behavior, Robinson noted that an aggravating factor in her decision to suspend Watson for six games was his “lack of expressed remorse.”

After previously denying all wrongdoing and saying he had “no regrets” for any of his actions during the massage sessions, Watson publicly apologized to “all the women I have impacted” on Aug. 12, before starting Cleveland’s preseason opener against the Jacksonville Jaguars.

“I want to say that I’m truly sorry to all of the women that I have impacted in this situation,” Watson said in a three-question interview that aired during the Browns’ pregame show. “The decisions that I made in my life that put me in this position I would definitely like to have back, but I want to continue to move forward and grow and learn and show that I am a true person of character and I am going to keep pushing forward.”

Watson has not spoken to reporters since the start of training camp.

The Browns traded for Watson in March, sending three first-round draft picks to the Texans. Cleveland then gave Watson a new five-year contract that was the richest deal in NFL history for any player.

Watson’s contract with the Browns guarantees him a league-record $230 million, with a base salary that will jump to $46 million in 2023 and a $44.965 million signing bonus.

Yet because Cleveland structured his contract to include a 2022 base salary of only $1.035 million, Watson was only going to lose $57,500 per game suspended, without the $5 million fine imposed in the settlement.

Browns coach Kevin Stefanski said at the start of training camp that Jacoby Brissett would become Cleveland’s starter in the event of a Watson suspension, and indicated recently that he’s “been very impressed” with Brissett thus far.

“Very comfortable with him,” Stefanski said. “I think he has a very good understanding of what we’re trying to do offensively.”

Despite being a backup for much of his career, Brissett has 37 starts with a record of 14-23.