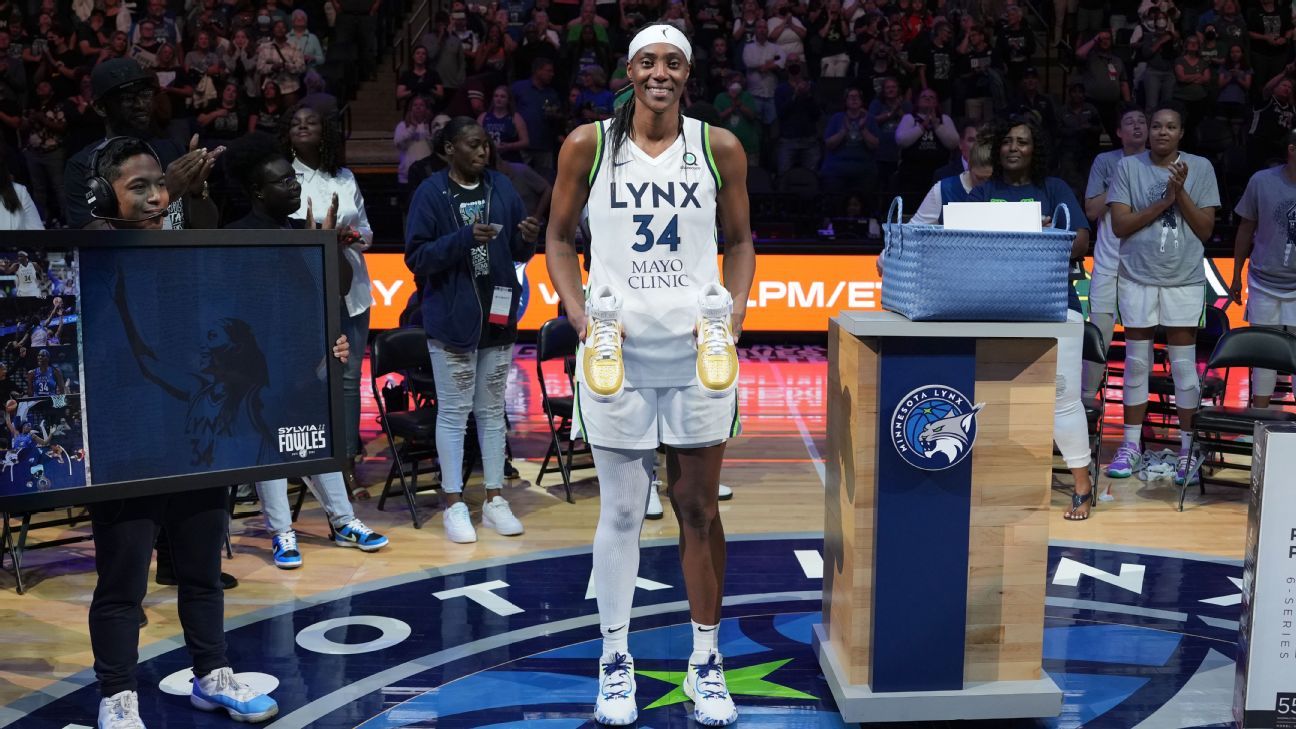 Fowles, a former MVP and the WNBA’s all-time-leading rebounder, will retire at season’s end, and the Lynx and their fans wanted to make sure she felt appreciated. Fowles has spent the past eight seasons of her 15-year WNBA career with Minnesota, a place that turned out to be a perfect fit for the Florida native.

“What hit me the hardest in the ceremony was the fans,” Fowles said of the postgame celebration that was held on the court after the Lynx fell 96-69 to Seattle in Minnesota’s last regular-season home game.” Just listening to them scream and give me my flowers, shall we say. It was nice.”

Fowles has been one of the most dominant centers ever in women’s basketball, dating back to her college career at LSU, her seven years in Chicago after being selected No. 2 in the 2008 draft, her Lynx tenure and her USA Basketball success, which included four Olympic gold medals.

Whether this is the last time fans will see her play on the Target Center court is still not certain. Even after the loss, the Lynx are still clinging to a chance at the playoffs. Minnesota is now 14-21, a game behind Phoenix and New York, who are tied at 15-20 for the last two playoff spots.

The Lynx will need to win at Connecticut on Sunday and then hope either the Mercury (who play Chicago) or Liberty (who play Atlanta) lose that day. If they all finish at 15-21, the Lynx have the tiebreaker against Phoenix and New York based on head-to-head record.

“We still have one more game left,” said Fowles, who had 13 points and 12 rebounds Friday. “We still have a little lifeline. Tonight wasn’t our night, so hopefully we go out and play better on Sunday.”

While it wasn’t a great game for the Lynx, who allowed the surging Storm to shoot 52.8% from the field in controlling the game start to finish, it was a memorable night for Fowles. Before the game, she and the Lynx honored Storm guards Sue Bird and Briann January, who are also retiring at season’s end. Fowles and Bird, the WNBA’s all-time assists leader, have been teammates on four Olympic squads.

“It just hit me: How blessed am I that in my career I’ve had a chance to be around these great players?” said Lynx coach Cheryl Reeve, who is now Team USA’s head coach and previously was an assistant. “Sue and Syl, that generation, they took the baton from those that started the WNBA, and they took this thing to another level.”

Another longtime Olympian, Seattle center Tina Charles, joined Bird and some other Storm players who stayed after the game for the on-court ceremony for Fowles. As much admiration and respect as the Storm players have for her, the reality is they had something to play for Friday, too: the No. 4 seed and home-court advantage in their first-round series with Washington. Seattle got that with the victory.

“It felt bittersweet,” Storm coach Noelle Quinn said. “As a fan of Syl and knowing how amazing she is, you don’t want to ruin her night, but it wasn’t ruined at all. So much love in the stadium for her. Win or lose, it was going to be her night and a great night. Though we won, it still was very special for her, for the organization, for the city, for us who love her as a competitor but as a friend and as a teammate.”

Fowles went to the women’s Final Four in all four of her seasons at LSU, and then helped the Sky make the WNBA Finals in 2014. But she wanted a chance to play for the Lynx and sat out the first part of the 2015 season waiting for a trade. That came in July of that year, and Fowles then helped Minnesota win its third championship. The Lynx also won the WNBA title in 2017. Fowles was Finals MVP both years and league MVP in 2017.

Former Lynx guard Lindsay Whalen, now the women’s basketball coach at the University of Minnesota, was on hand Friday to pay tribute to Fowles, whom she jokingly called by the nickname “Sylvester Flowers.” Whalen, a starter on all four Minnesota title teams, said that while the Lynx were a championship squad before Fowles came, with her they became a dynasty.

Another former member of Minnesota’s championship core, current Lynx assistant coach Rebekkah Brunson, said that Fowles gave her a hug after the two had faced off as opponents years ago. Brunson joked that she wondered at first if Fowles was taunting her. Then she realized that was just how Fowles was: a fierce competitor during the game and a compassionate friend to everyone as soon as it was over.

“Not for a moment was I disappointed,” Brunson said about getting to know Fowles as a teammate. “She was exactly what that hug said: ‘I care about you, I support you, I want to see you succeed. I’m there for you no matter what.’ She’s been that ‘hug’ for this community, too.”

Lynx owner Glen Taylor told Fowles at the ceremony that he watched her play with the Sky and wished she was with Minnesota. Then, when the Lynx were able to trade for her, Taylor said he got to know Fowles and that they rarely talked about basketball. Their conversations were about ways to work in the community and help people.

“What hit me the hardest in the ceremony was the fans. Just listening to them scream and give me my flowers, shall we say.”

Reeve teased Fowles by starting a “one more year” chant at the ceremony, then said she knew the answer would be, “Not no, but hell no.”

Fowles, who will turn 37 in October, is averaging 14.6 points, 9.7 rebounds and 1.2 blocked shots per game. She is still one of the most feared post players in the WNBA. Reeve said Fowles is going out at the top of her game because “she never wanted to look bad. She didn’t want to be one of those old players that maybe should have quit two years ago.”

Fowles said she is ready to move forward in her life whenever this season ends, but she is glad she returned for one more year. Initially, she didn’t want a lot of fuss over her farewell, which has been dubbed “Syl’s Last Ride” by the Lynx. However, it has turned out to be a sweet experience for her.

“I’m very happy going through this whole process this year,” Fowles said. “At the beginning, I wasn’t too thrilled about it because I didn’t want the attention. But you do have to realize that people do understand the work that you put in through 15 years.

“I’m never looking for an easy way out. Whatever needs to be done that night, I think I’m the first one to step up and be willing to do that. Me taking those responsibilities showed throughout my career, and I’m very proud of that.”