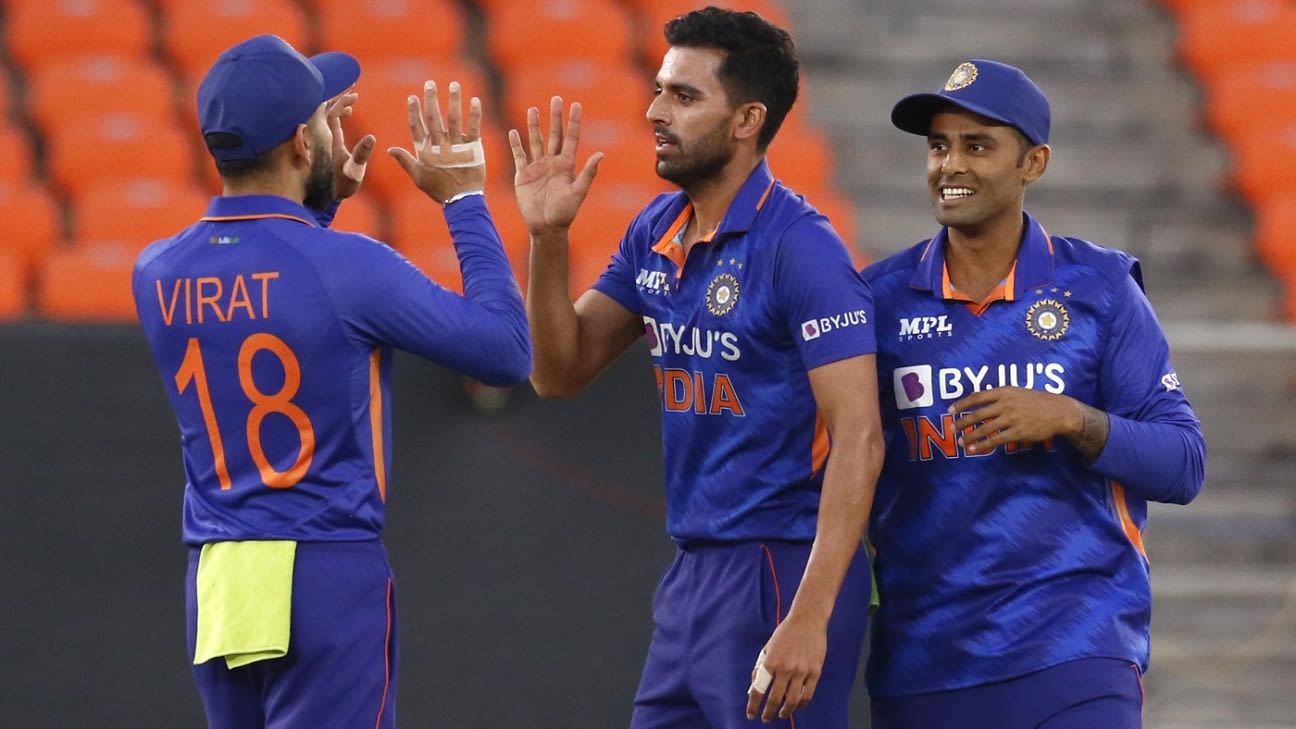 04.08.2022 SportsCelebrity 60Leave a comment
Later this week or early next week, India’s selectors will pick the squad for the Asia Cup – their last selection before having to put together the 15 for the T20 World Cup in October. While there are home T20I series against Australia and South Africa after the Asia Cup in September, it is likely that the World Cup squad will have to be named before those matches.

India could approach the Asia Cup in two ways: pick their best squad, or use the tournament to further assess options for the World Cup. As things stand, provided everyone is fit, 12 slots are sealed. Rohit Sharma, Virat Kohli, KL Rahul, Suryakumar Yadav, Rishabh Pant and Dinesh Karthik on the batting front. Hardik Pandya and Ravindra Jadeja should be the two allrounders. Yuzvendra Chahal should be the wristspinner to go with three fast bowlers: Jasprit Bumrah, Bhuvneshwar Kumar and Harshal Patel. That leaves, in ESPNcricinfo’s eyes, three slots open.

Whether India pick these 12 and their first choices for back-up roles for the Asia Cup, or give one final chance to other contenders, remains to be seen. The idea could be to cover as many bases as possible with the remaining three players. Here are some of the options for whom the Asia Cup selection will be crucial.

Deepak Chahar
Not too long ago, Deepak Chahar might have been India’s preferred option as the powerplay wicket-hunter, but in his injury-forced absence, Bhuvneshwar has served a timely reminder of his class. Chahar’s ability to hit sixes will still tempt India, especially to cover for the possibility of Jadeja not succeeding. Jadeja will still be India’s No. 1 pick as an allrounder but his strike rates both with bat and ball have been a concern this year. So if Jadeja’s batting doesn’t quite click, India could look for a more attacking spin option, in which case Chahar can lengthen the batting order. India will surely want to see how he goes at the Asia Cup.
R Ashwin
A piece of trivia: in 2022, Ashwin has a better batting strike rate than Jadeja in T20s. But batting is not the reason for Ashwin’s resurgence in this format. The offpsinner has emerged as the bankable bowler that teams have gone back to of late: an experienced bowler who can give you four overs of considerable wicket-taking potential and few horrible days. Ashwin has a good chance of playing against teams with several left-hand batters, especially if India can find Jadeja’s runs from elsewhere. But if they’re up against a line-up that is right-hander heavy, then Chahal and Jadeja will probably play as first-choice spinners, and it is hard to imagine a scenario in which India play three spinners.
Axar Patel
Axar is a like-for-like back-up for Jadeja. The shorter the format gets, the bigger the threat Axar poses to Jadeja’s place. However, it is unlikely India will pick a player who is a back-up in that exact role and not much else. Eventually, it is going to be either Jadeja or Axar in the XI. So if Axar makes the cut for the Asia Cup, it will mean he is still a threat to Jadeja’s place.
Deepak Hooda
Hooda has taken every opportunity that has come his way in 2022. He has also proved his utility with the ball, should he be required to sneak in an over or two against left-hand batters. While it’s likely that one batter from the first-choice 12 mentioned earlier will already be on the bench, there could still be place for Hooda as a second batting back-up in the squad of 15.
Arshdeep Singh
Arshdeep’s USP is his ability to nail yorkers at the death and the fact that he is the only left-arm quick in the running. If India pick only one fast-bowling back-up, it could come down to Arshdeep vs Chahar. Arshdeep could lose out on the batting front, because in Bumrah and Yuzvendra Chahal, India already have two sure starters who aren’t six-hitters. Chances are, India pick both Arshdeep and Chahar for the Asia Cup and see how they go.
Kuldeep Yadav and Ravi Bishnoi
The two wristspinners have been around the T20I set-up for the last few months, but India’s recent selections suggest they will not play two wristspinners in the same XI, and they might not need back-up for Chahal. However, don’t be surprised if one of Kuldeep and Bishnoi makes the cut for the Asia Cup.

If you had to pick three of the following seven players to complete India’s 15-man squad, who would you choose?