Tobe Hooper’s “Poltergeist” begins with a sound all too familiar to anyone in the Baby Boomer/ Gen-X age bracket: “The Star-Spangled Banner” playing over the sign-off that accompanied the end of every broadcast day for a public television station.

The extreme closeup of this clip cuts to a frizzy of “snow,” and we’re suddenly aware that (like the young heroine we’re about to meet) we’re far too close to this television set.

The flurry of white noise is suddenly menacing.

The camera pulls back from the TV set to a family viewing room, cluttered and lived in, with the family dog snooping around as the Freeling family sleeps.

We meet Steve (Craig T. Nelson), Diane (JoBeth Williams), Carol Anne (Heather O’Rourke), Robbie (Oliver Robbins) and Dana (Dominique Dunne). The dog essentially introduces us to this family of five by investigating each room as the camera stalks him.

What happens next is positively eerie and, in comparison to everything that happens next, subtle: There’s something inside the TV and it whispers to Carol Anne.

The late O’Rourke is adorable but also had such a strong, hypnotic presence; her chats with “the TV People,” as she would call them, goes on for a while, which is what makes it so disturbing.

Carol Ann is talking to strangers, invisible but present, inside her house. Her family is right there, watching her do this and they do nothing to stop it because they initially don’t understand the threat.

The Freelings are truly the All-American eighties family, sporting Toys ‘R Us and “Star Wars” bed sheets and blankets. The early scenes are funny, with a lite slapstick feel, though full of foreshadowing (the death of a family bird and the young boy’s fear of a gnarled tree outside his window have big thematic and visual payoffs).

Following a “funeral” for the family pet, little Carol Ann innocently asks, “Can we dig it up and see its bones?” It’s amusing at the moment, but chilling when you consider where this is going.

As the TV set airing “A Guy Named Joe” adds to the theme, this is about a suburban family dealing with the issue of death.

Williams’ Diane Freeling is plucky, attractive and liberated, though she vocalizes a rational fear that her daughter could sleepwalk into a muddy hole that will one day become the family pool.

Nelson’s effortlessly authentic performance conveys Steve’s love for his family, which he balances with providing “42 percent” of the sales at his real estate firm. Williams and Nelson are excellent here – despite how heightened the film’s reality becomes, nobody appears to be acting.

Likewise, Beatrice Straight is so wonderful in this. The scene where Nelson listens to his son discuss the possibilities of the afterlife with Straight conveys parental dread and wonder.

The third act is powered by the appearance of psychic Tangina, played by the late Zelda Rubinstein, who snatches the film away from Straight. Rubinstein’s monolog, in which she describes how Carol Ann is in the presence of “The Beast,” is incredible.

RELATED: HOW ‘TERROR IN THE AISLES’ CAPTURED ’80s HORROR

There’s also Rubinstein’s enthralling introduction to the film’s first big climax: “Now clear your minds. It knows what scares you. It has from the very beginning. Don’t give it any help. It knows too much already…now, open the door.”

“Poltergeist” is stylish but always evokes the familiar (or what passed as familiar in 1982) in order to hit us psychologically or with a shuddering physical detail. Some sequences are admittedly overdone and underlined by big f/x and sentimentality – note how Williams’ most moving scene, where Carol Ann invisibly moves through her, would be better without the obvious aid of an offscreen wind machine.

The first encounter the Freelings experience concludes with O’Rourke’s legendary “They’re Here” and animated “spirits” swirling around. It’s actually less effective than the in-broad-daylight encounter that comes the next day in the kitchen, as Carol Ann still stares at white noise and the brother silently notes the bent spoons on the breakfast table.

The shot of Diane’s chairs rearranging themselves out of view in one continuous shot is old school but, nevertheless, breathtaking. After that scene, we see Mr. Freeling at work, bragging about the way the local homes were built, another smart bit of foreshadowing.

There’s a dreamlike, child’s logic to some of this, with a killer tree, “The TV People” and what happens to Carol Ann to kick the second act in motion, sporting a surreal quality.

For all the things here that have aged, the wow-inducing moments stack up pretty high; they include Carol Ann falling backwards into her closet and a spooky and beautiful video recording that reveals the invisible threat to be people with visible halos.

Perhaps, like “Close Encounters of the Third Kind,” the film works best as a metaphor for parental fears and hard decisions and not entirely when taken literally.

Two scenes have haunted me for decades.

Diane tries and fails to open the door to her daughter’s haunted bedroom (the sound effects and the rawness of Williams’ performance sells it) and Nelson’s meltdown at the ending, in which a potential Oscar clip of acting instead rests on the horrified eyes of his corrupt boss and the film’s true villain, Teague, played by James Karen.

Television is omnipresent in this world, as every household has access to “The TV People” that plague the Freelings. It’s established that the film’s location, “Cuesta Verde,” all 300 acres of it, is in “Phase Five.”

Clearly, the damage done is long-term and massive in scale. Karen is wonderful as Mr. Teague, who casually tells Mr. Freeling that the land being developed is “not an ancient Indian burial ground, just people.” His callousness astonishes and the movie punishes him for it. 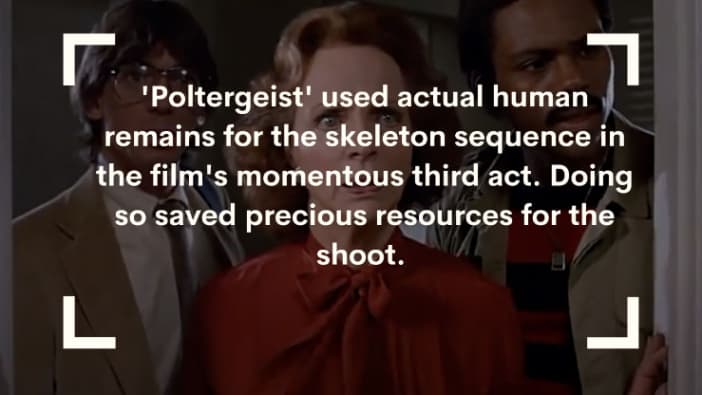 The famous fake-out ending is well paced and effective; even the dog is on edge, as we’re waiting for things to wrap up or suddenly get much worse.

A sequence in a bedroom with Williams, uncomfortably reminiscent of “The Entity” (also 1982) but never exploring the sexual implications of the imagery, should either have been dropped or filmed in a way that didn’t exploit Williams. It’s the one big misstep here.

In the final scene, a road sign passes by the Freelings and, almost like a mocking taunt from “The TV People,” it reads, “You are now leaving Cuesta Verde – We’ll Miss You!”

Despite Hooper’s credit as the film’s director, rumors have persisted for decades that producer Steven Spielberg actually made it, barging onto the set and taking the filmmaking reigns away from Hooper.

It bothers me that, decades removed, no one wants to even consider that Hooper probably directed “Poltergeist” and that Spielberg, despite set visits, creative suggestions and occasional moments where he stepped in and made apparent “adjustments,” is not the films’ director.

“Poltergeist” exists in a universe that perhaps could have been deemed the Amblin Universe, as it appears to have the same feel, look and primarily white denizens of most other Spielberg-produced Amblin films from this era.

Hooper has become victim to the rumor that Spielberg either bulldozed his way onto the set and stepped in the filmmaker’s way or, just as damning, that Hooper was ill-equipped to tackle such a demanding assignment and couldn’t stand up to the director of “Jaws” as he commanded the film away from him.

Both rumors are ridiculous and impossible to take at face value. Here’s why.

“Poltergeist” may feel like it takes place in practically the same area code as “E.T.” but there are recognizable touches of Hooper’s work, before and since, that make it visually and thematically in line with his body of work.

Hooper can handle a big special effects-driven film (as the 1985 “Life Force” proved), has portrayed suburban life and dangers before (in his prior 1981 “The Funhouse”) and excels at frenetic action (both here and in his signature work, “The Texas Chainsaw Massacre”).

A shot of Diane comforting her son as he freaks out, filmed in silhouette, is pure Hooper (the intensity and depth of that image is rattling).

Finally, and I’m aiming to leave teeth marks with this question: are the same knuckle heads who want to deem this Spielberg’s film ready to declare that the same thing happened on other Amblin works?

Why is Hooper the supposed victim of Spielberg’s shoving him out of the director’s chair, but not Robert Zemeckis (“Back to the Future” and “Who Framed Roger Rabbit”), William Deer (“Harry and the Hendersons”) or Joe Dante (“Gremlins” and “Innerspace”)?

I suggest the reason why no one questions that it was Zemeckis who directed the overtly Spielbergian “Back to the Future” and not Spielberg himself is that, in addition to no on-set accounts and photos to suggest otherwise, Zemeckis is a respected mainstream director and Hooper was viewed as an outsider independent filmmaker.

Film historians have noted that there are traces of John Sayles’ unmade but influential “Night Skies” screenplay (which was once set to be directed by Spidelberg) in “Poltergeist.”

Fair enough, but how about also noting that Spielberg hired Hooper for this and that not only does “Poltergeist” have shared Hooper visual and thematic qualities but the kind of “Texas Chainsaw Massacre” intensity that inspired Spielberg to think of Hooper in the first place.

I love Spielberg, particularly his work during the late 20th century, but not considering that Hooper likely is the film’s true director is to undermine that this is not only “A Tobe Hooper Film” and but also Hooper’s masterpiece.

The infamous “melting face” sequence raises a valid question: how in the world was this given a PG rating by the MPAA and not the more deserving R rating (the likely answer- the same way Spielberg’s “Jaws” and “Raiders of the Lost Ark,” both are rated PG, managed to squeak by).

I don’t mean to undermine Spielberg’s contribution to “Poltergeist,” both as a producer and writer, only to suggest that we allow untrue rumors to finally die and accept that Hooper directed the film.

If you want to get technical about how to view this sort of collaboration, then think of it as Spielberg wrote the music and Hooper conducted the orchestra.

RELATED: WHY ‘HOUSE’ TOOK MORE RISKS THAN MOST ’80s HORROR

Some theatrical posters deemed this “The First Real Ghost Story.” That tagline was more deserving of Robert Wise’s “The Haunting” (1963) but I see what they meant by that.

Unlike the popular but tacky “The Amityville Horror” (1979), “Poltergeist” embraces the contrast of the real and the supernatural, offering the kind of spectacle and dramatic power most “spooky” films of the era couldn’t touch.

“Poltergeist” has many other worthy and shudder-worthy opponents but it’s still the definitive American haunted house movie. Spielberg deserves credit for deeming Hooper worth of making “Poltergeist,” just as Hooper is overdue for receiving proper acknowledgment as the film’s true director.