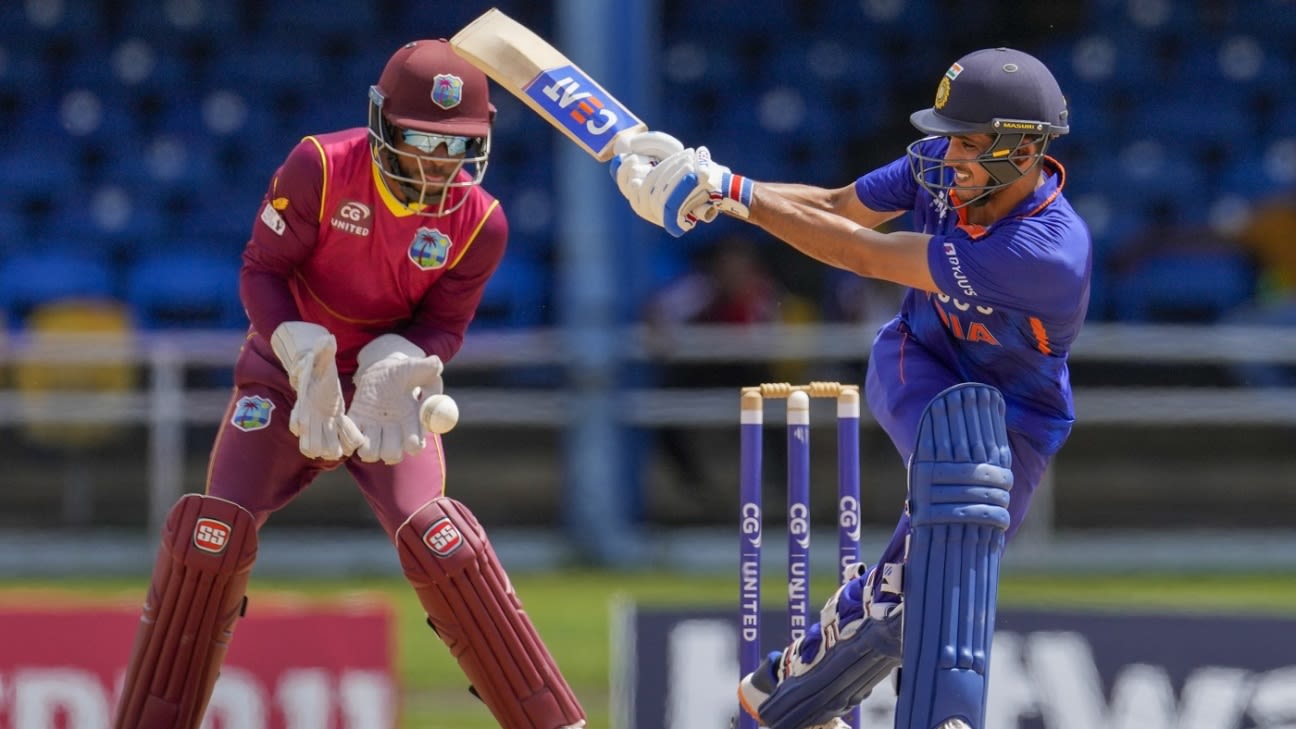 The first two matches of the series were tight contests where both teams remained in contention until the final ball was bowled. But India had it much easier during the third ODI in Port-of-Spain, as the visitors completed a 3-0 sweep of West Indies following contributions from Shubman Gill, who hit a career-best 98*, Shikhar Dhawan, who got 58, and Shreyas Iyer, who contributed a quickfire 44. All their bowlers chipped in too, as West Indies fell away quickly during the chase.

The hosts were asked to chase a DLS-revised target of 257 in 35 overs after India posted 225 in 36, their innings ending prematurely after a two-and-a-half-hour rain delay had already trimmed it down to 40 overs.

Mohammed Siraj sent West Indies on the back foot in the second over of the chase, when he cleaned Kyle Mayers up with a good length delivery before trapping Shamarh Brooks in front with one that angled in. West Indies were 0 for 2 at that stage, with nine deliveries gone.

Brandon King and Shai Hope briefly brought them back on track with a 47-run stand before Yuzvendra Chahal had Hope stumped for 22. King was then joined by Nicholas Pooran in another partnership that gave West Indies hope, before Axar Patel’s arm ball in the 14th over bowled King for 42.

But immediately after, Pooran fired a six and four off Deepak Hooda, keeping his side afloat as the required rate hovered around eight an over. However, Keacy Carty’s struggle to get going at the other end seemed to put pressure back on Pooran; when Carty finally decided to try something different, he skipped down to Shardul Thakur in the 19th over only to bottom-edge on to his stumps for 5 off 17 balls.

By then, West Indies needed nearly 10 an over, and although Pooran hit two more fours off Axar, he fell for 42 in the 22nd over to all but end the game, which was set up by India’s opening batters Gill and Dhawan.

In their third successful partnership in a row – they followed unions of 119 and 48 with 113 on the day – the right-left pair started sedately in what was an innings of two halves from India: the first 24 overs produced 115 runs; the next 12 fetched 110.

Gill missed out on what would have been his maiden ODI hundred, as a second rain interruption meant India’s innings was announced closed with a scheduled four overs left at that stage. When play resumed after the first rain delay, India had 16 overs remaining, as Gill and Iyer switched gears to accelerate the innings.

Both batters threw everything at the bowling after having to adjust for the loss of overs: they came down the pitch to spinners, tried the reverse sweep, played aerial shots whether while pulling or driving, and kept lofting over the in-field.

Gill and Iyer added 86 for the second wicket in less than ten overs, making up for the sedate beginning after Dhawan opted to bat on winning the toss. Dhawan was quiet to start the innings, his 58 coming off 74 balls on a slow pitch where he did try attacking, but often failed to time and place the ball.

Dhawan hit seven fours, while Gill also hit as many along with two sixes. The first two overs after the rain break saw 31 runs being plundered – including four fours and two sixes – as Gill and Iyer pulled, cut and drove for fun. Their partnership had only just started before rain broke through.

But Hayden Walsh Jr’s second ball after the break was swung for six over deep square leg by Iyer, signalling India’s intent early, as quick runs were the need of the hour. The next ball was bisected for four between point and short third, before Gill skipped down off the final delivery and swung over the bowler’s head for six.

West Indies brought some pace from the other end, only for Iyer to hit one four off Jayden Seales, and Gill to slam consecutive fours – the first of which was supreme timing to place the ball past mid-off – as India raced along.

Both batters continued finding the boundary when the hosts switched to Jason Holder and Akeal Hosein, before Iyer swatted the latter to long-on for 44 off 34 balls. But Gill kept ticking the scoreboard at the other end, as Suryakumar Yadav joined him in pursuit of rapid runs.

Suryakumar fell for 8 after carving one four behind point just two overs before play came to a halt, with Gill having skipped from 51 off 65 balls at one stage, to an unbeaten, run-a-ball 98. He might rue missing out on a century, as he got only 13 off his last 14 balls – perhaps just one more ball would have been enough to get to triple figures. In the end, though, it didn’t make too much difference to India’s fortunes.

Himanshu Agrawal is a sub-editor at ESPNcricinfo