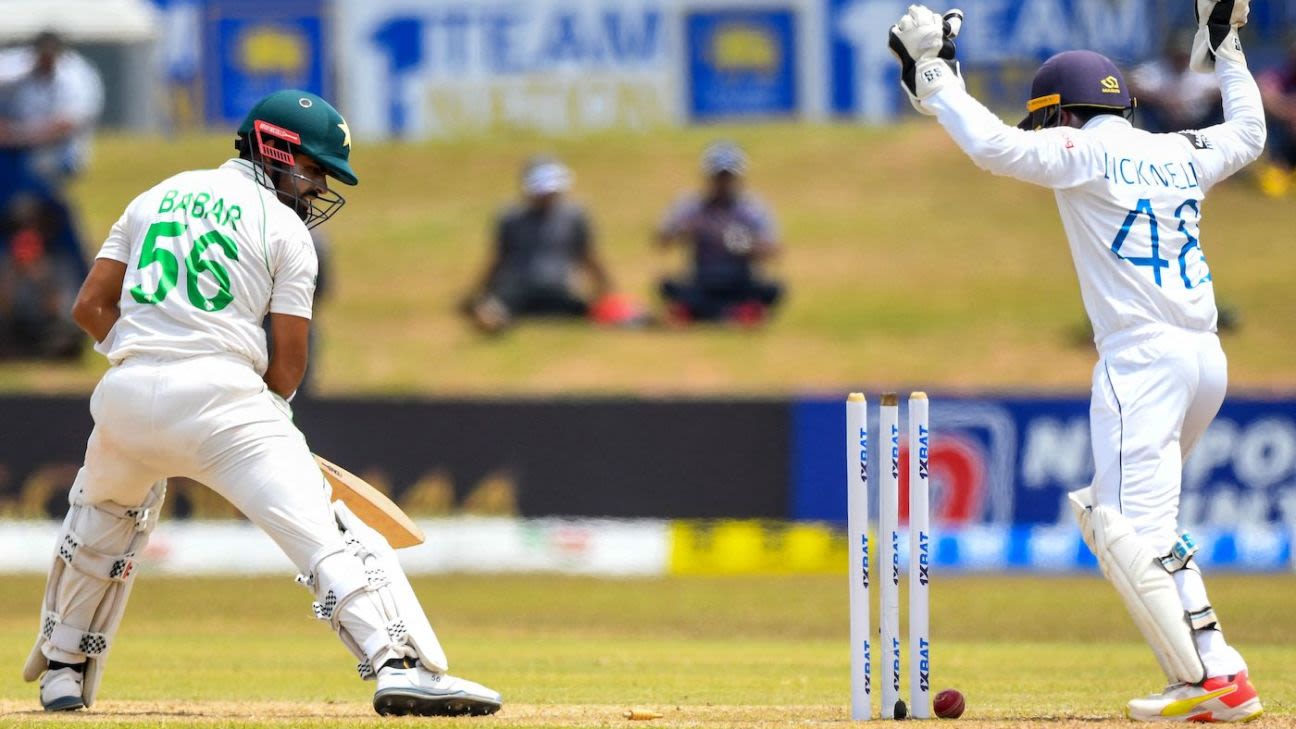 By tea, Pakistan were 111 for 4, still 267 runs behind Sri Lanka’s 378. There were no major issues with the surface, which is offering some turn but not the rapid variety that prompts the big collapses. Even so, eight wickets have fallen in the first two sessions on Monday. Sri Lanka had earlier lost their four remaining wickets for 63 runs since the start of play.

As had been the case in Sri Lanka’s innings, Pakistan’s top-order batters got starts, but were unable to turn those into match-defining scores. Babar, for example, had negotiated his first 33 deliveries with relative ease. He had danced down the track and been hit on the pad sixth ball, prompting an lbw appeal and then a review. But that never looked out, and he appeared secure in defence, and was quick to seize on bowlers’ errors in length.

But then, against the run of play, he pushed at a wide Prabath Jayasuriya delivery that was never threatening his stumps. As it failed to turn as much as Babar had anticipated, he got an inside edge to the ball, which then clattered into his stumps. He was out for 16.
The wickets of Imam and Rizwan were not the result of sustained periods of pressure either. Dhananjaya de Silva deceived Imam in the air, getting the batter to leave a big gap between bat and pad, which the ball easily slipped through to disturb the stumps. Imam had batted 54 balls and made 32. Rizwan was hit on the pads playing back to a quicker one from Ramesh Mendis. It looked plumb from the outset, but Rizwan reviewed, and burned one of the three available to his team. He was gone for 24.

Perhaps, of the four batters dismissed, Shafique is the hardest to blame, because he got out to a good Asitha delivery before he had got his eye in. Second ball of the innings, he pushed at a length ball in the corridor while rooted to his crease. The inside edge cannoned into middle and leg.

All of this was after Pakistan had had an excellent start to the day, thanks to a fearsome Naseem Shah spell. He removed both overnight batters with bouncers. The one to debutant Dunith Wellalage followed the batter as he tried to evade it, but could only fend the ball for second slip to get under. The ball that dismissed Niroshan Dickwella wasn’t quite so impressive – it was a chest-high bouncer slightly down leg, which Dickwella tried to help around the corner, and nicked instead.
After Naseem made those breakthroughs, Yasir Shah took the two remaining wickets, both bowlers ending the innings with three wickets each.

Ramesh’s 35 saw Sri Lanka offer some resistance down the order, however. He put up a 20-run partnership with the No. 10 batter, and a 25-run stand with the No. 11, to ensure Sri Lanka’s lower order did not completely fall over on day two.