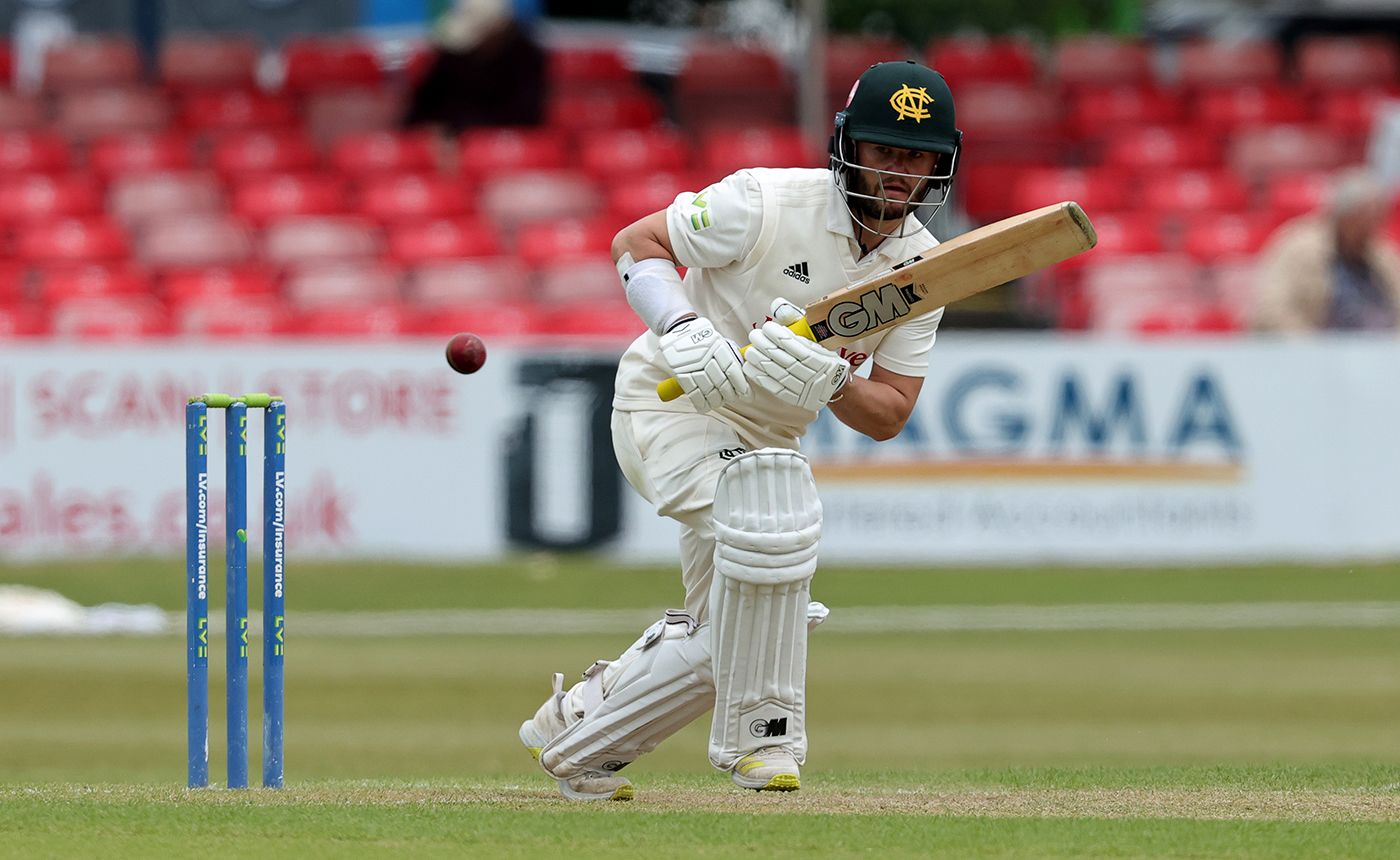 It was the hottest day in the UK’s history, but county cricket decided to brazen it out. Old salts recalled burning throats in the dry heat of Kimberley or the privations of Colombo in April with humidity at its highest. Many were just harmlessly telling old tales. Others felt it a matter of honour: climate breakdown is here and now, but they were still in denial, unable to comprehend, staring it down. The tragedy is that unless the world awakes, they won’t be able to stare it down for much longer.
The hottest day ever experienced in Derbyshire was a couple of degrees below the UK record of 40.3C being set elsewhere, but 38C was enervating enough, thank you, certainly as far as the county’s bowling attack was concerned. They took one wicket all day on a parched surface and the 439 runs they conceded included an unfinished record stand for Nottinghamshire against Derbyshire – 393 in 81 overs by Ben Duckett (237* from 263 balls) and Haseeb Hameed (165* from 280). Once the new ball had softened, it felt utterly predictable.

They have already achieved Nottinghamshire’s highest stand for any wicket against Derbyshire, inficting pain upon their East Midlands rivals, beating the 372 between Kevin Pietersen and John Morris at Derby in 2001.

There were other records too, including the previous highest second wicket stand by anybody against Derbyshire of 344 by Jack Devey and Septimus Kinneir for Warwickshire at Edgbaston in 1900. Jack Devey: better known as an Aston Villa forward during a golden era; Septimus Kinneir: the seventh of 13 children (there’s a clue in the name), who was taken on a tour of Australia for the first time at 38.

There is always an element of regret if a really old record falls; it can feel like an assault on cricket history, a kicking of gravestones. But the point of youth is to write their own history. And one of Nottinghamshire’s most famous records was also only five runs away when the first day came to a footsore close – 398 by Arthur Shrewsbury and Billy Gunn, a Notts second-wicket affair, made against Sussex, back in 1890.

“Give me Arthur,” WG Grace is famously meant to have said when asked which batter of that time he would most like to have alongside him. Gunn was also a football forward for both Nottingham clubs and a talented sprinter, but his restrained approach could drive opponents to distraction. Duckett and Hameed, by contrast, have felt England rejection, but they were in impeccable form.

Duckett felt their experience on the sub continent was a boon. “It was tough in that heat,” he said. “I was dropped a couple of times and if you catch those it’s a different day. There was enough in there this morning but in that heat we knew if we could get them into their second, third, fourth spells it would get a lot easier. Thankfully me and Haseeb have both played in the sub continent which probably helps. Haseeb is very calm, he’s kind of in his own bubble when he bats so there was minimal talk, we both know what we’re going to do. I’ve never scored that freely for a day and I think to do it in 40 degree heat makes me feel very proud. It’s been a pretty special day.”

Derbyshire rued dropping Duckett twice – slip catches by Ben Aitchison, a doddle off Sam Conners on 24, and again by Wayne Madsen off Luis Reece on 71, Madsen only able to parry a sharp head-high chance. Hameed was reprieved on 74 when he pulled Conners to deep square leg where Harry Came misjudged the flight of the ball which dropped over his head and went for four.

Derbyshire’s head coach, Mickey Arthur, had dismissed suggestions ahead of the match that it was too hot for cricket. “There’s an England Lions tour to Sri Lanka next year. If you think this is hot, wait until you see what Sri Lanka’s going to dish up for you,” he said. “Our boys have to be able to handle the conditions.”

Sri Lanka’s demands are undeniable. 30 years ago – old salt memory alert – Tim Munton managed only three overs in Colombo on an England A tour before he left the field hallucinating, complaining he was seeing pink elephants and needed to be put on a drip, although such privations in Sri Lanka are due as much to humidity as temperature. The one consolation of this Derby heat was that humidity levels were relatively low. Most spectators had stayed away, so much so that the club could have passed round a tube of Factor 30 and still had some to spare. There is only one covered area at Derby, unofficially termed the East Midlands Demolition Stand on accounts of an advertising hoarding. It would not be a good time to knock it down.

If Arthur’s words were intended as a motivational speech, his hopes that Derbyshire’s attack would handle the conditions were not realised. A Blast quarter-final thrashing against Somerset at Taunton followed by this – they are in the most draining phase of the summer. “Get changed and go home,” was how Dave Fletcher, the BBC Radio Derby commentator, concluded his observations on the day and it was an apt summation.

Duckett registered his highest score for Nottinghamshire, although he still has some way to go to beat his first-class best of 282 – in other words, probably about 20 past 12 on Tuesday. Hameed achieved new career-heights – in his previous 10 hundreds, he had never made more than 122. Duckett greedily fed upon Derbyshire with the knowledge that here was an opportunity not to be wasted; Hameed, who can rarely have batted in silkier fashion, just looked happy to be playing with such freedom.

Derbyshire’s attack all struggled in the blistering heat, the outfield lightening by the hour. Reece held up as well as anybody, arms pinking. George Scrimshaw, whose pace is his main attribute, was lightly used. Aitchison was repeatedly driven; Dal was not and he did as well as anyone. Came purveyed a bit of offspin ahead of the second new ball, his first bowl in senior cricket.

Assumptions were that batting sides would dominate around the country, but only Nottinghamshire entirely fulfilled expectations. As many as 45 wickets fell in seven matches around the country, even though two grounds – Cheltenham and Northampton – chose to finish 90 minutes early and make up lost time on subsequent days. In Derby, as they left the field for the final time at Cheltenham, there was still a full session to play. Here, more than anywhere, there was pain behind the eyes.