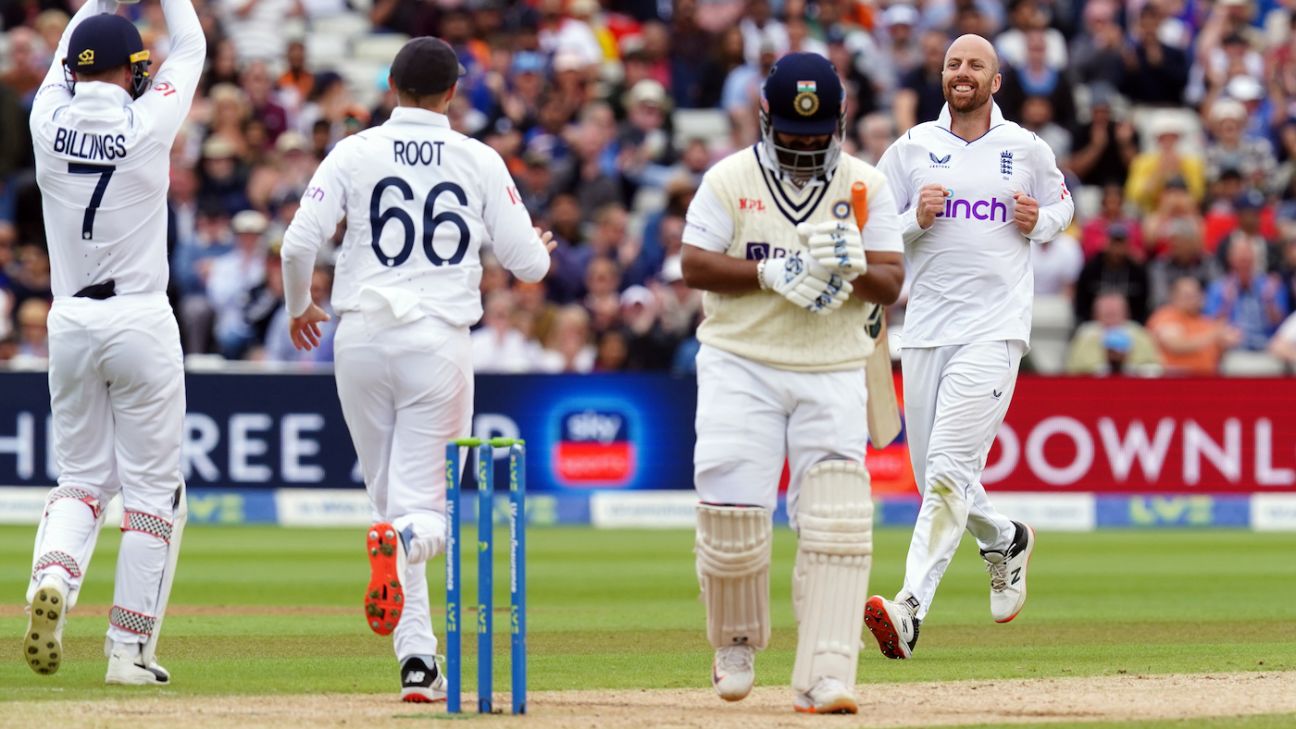 05.07.2022 SportsCelebrity 60Leave a comment
Given how the day played out – India on top, then England, then India, then England again – another twist seems inevitable. But it ended with control in England’s hands, with India’s batting coach, Vikram Rathour, conceding that a poor session with the bat in the morning had been at the root of their opponents’ fightback.

“The plans didn’t work out,” Rathour said. “I’ll agree that we had a pretty ordinary day as far as batting is concerned. We were ahead in the game. We were in a position where we really could’ve batted them out of the game. Unfortunately, it didn’t happen. A lot of people got starts but really couldn’t convert. We were expecting one of them to play a big knock and have a big partnership but unfortunately it didn’t happen like that.”

Shreyas Iyer looked least in control against England’s short-ball plan but Shardul Thakur, Shami and Bumrah all perished in similar fashion. That compounded the early dismissal of Pujara, playing one of those back-foot punches, except straight to backward point.

“Yes, they used a short-ball plan against us in the field,” Rathour said. “We had to show a little better, not intent, but strategy. We could’ve handled it slightly differently. People tried to play shots but didn’t really convert or execute them well enough. They got out to that. We will have to rethink how we handle that next time in a similar situation, against similar bowlers who keep similar fields. We will need to have a better strategy against them.”

There has already been a precedent for India’s potential defeat in this match, as recently as January in Cape Town. In a low-scoring series decider, India eked out a small lead only to lose that advantage in their second innings. Pujara, Ajinkya Rahane, Shami and Bumrah fell to the short ball, India lost by seven wickets.

“Of course, at this level you expect people to bowl short against us, and especially against the Indian team, people have been using short ball for quite some time,” Rathour said.

“People have their own ways of dealing with that. As a batsman you have your own way to deal with that. We don’t really say you have to do this or do that. As a batter you need to decide, according to your game, what suits you in that situation and in those conditions. Unfortunately, today we couldn’t really execute whatever plans we had.

“Today was the day we were ahead. We should have actually batted better and put them out of the game with our batting. But unfortunately we didn’t do that.”

Rathour still retains hope that things change on Tuesday morning. It is, he said, the kind of pitch where one breakthrough might bring a few more – as happened either side of tea today when England lost three for two.

“Two wickets in the morning early and again the game will open up,” he said. “We know that, we understand the game, it is a big target still. It’s still more than 100 runs. We take two wickets early and the game can still open up.

“The kind of bowling Shami and Bumrah are doing, it’s not beyond them that they get one wicket, then one, two, three can fall. And that can bring us back in the game.”