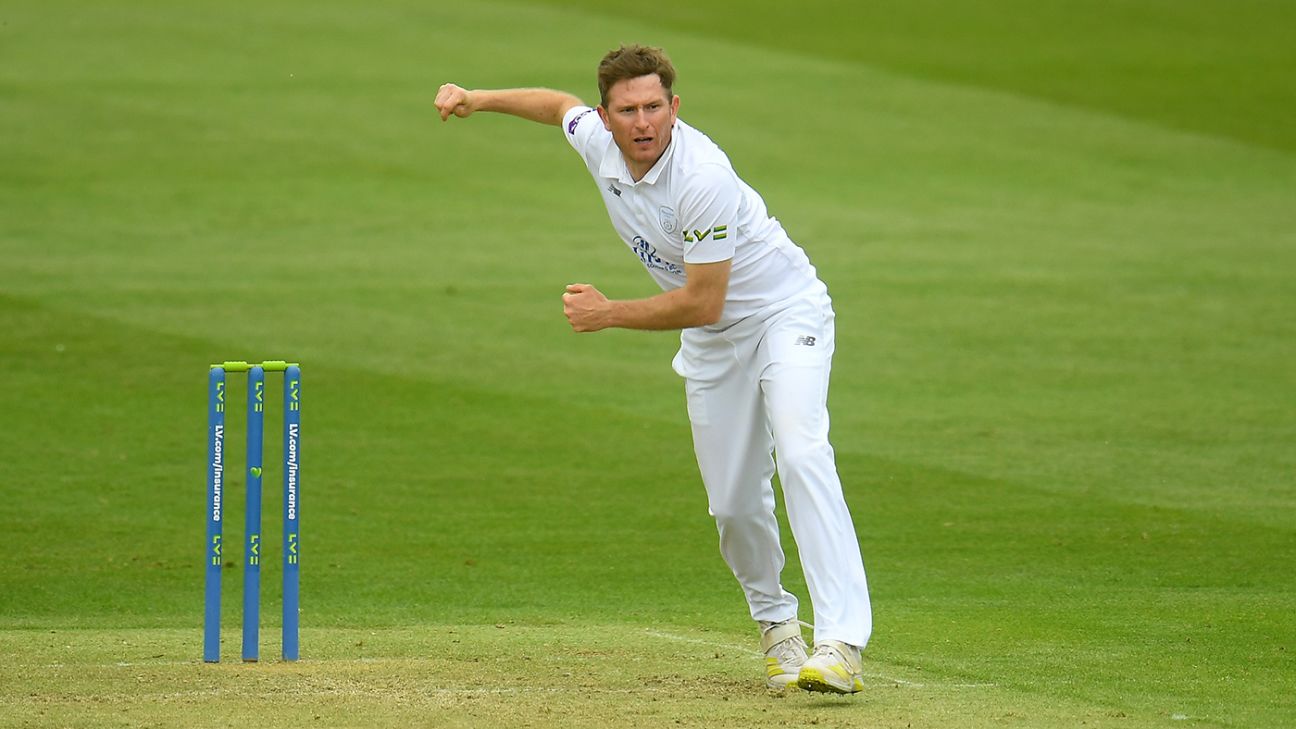 How to play Simon Harmer on a pitch offering turn and bounce will again be the main topic of conversation at Chelmsford. Harmer soon took the last four Hampshire wickets to fall on the second morning and, as many had imagined he might, returned the best Championship figures this season in the process.

His 8 for 46 was the first eight-for in Division One this summer, and also surpassed Dane Paterson’s 8 for 52 for Nottinghamshire against Worcestershire in Division Two. A pitch the colour of a peeled banana should continue to offer plenty of assistance on the third day and, despite signs of defiance, Hampshire’s target of 299 remains a distant dream.

How should Hampshire combat Harmer? Limit straight-bat shots, stay inside the line and, when you do hunt out the leg side do so with vigour and scare the close fielders to death might be one theory. Felix Organ appeared to have done a lot of thinking roughly along those lines and, with 13 overs to survive at the end of the day, his approach was particularly decisive. He swung Harmer for three leg-side sixes, the bowler conceded 30 from six overs and Hampshire closed their 13 overs somewhat enriched at 35 without loss.

Dismissals at the start of day two included a reverse sweep (Keith Barker), a top-edged flat bat through cover (James Fuller) and a swing to deep midwicket (Kyle Abbott). Ben Brown, who played well for 38, was unfortunate and conveyed the fact the ball flicked the top of his pad with a meaningful pad bash, followed by an exasperated swing of his arm and spin of his bat.

Liam Dawson, as Hampshire’s senior spinner, then responded with a creditable 7 for 68 – the first spinner to take five or more wickets at Chelmsford other than Harmer since 2014. He is not a big turner of the ball, but he is a thoughtful bowler and approached every delivery with an air of great care as if he was not just bowling the ball but computing it. Nick Browne met the turning ball as he does swing and seam, with great deliberation, his 33 from 98 balls the most considered innings of the match. Adam Rossington‘s 60 from 71 balls, his highest Championship score of the season, was a more pugnacious response from No. 7 after the loss of five early wickets. Harmer, as if to rub it in, then contributed 61 as he mowed regularly and spiritedly to midwicket.

Rossington’s sudden move from Northamptonshire on the eve of the season, partly driven by a disagreement with Northants’ coaching staff over fitness regimes, was soon followed by Adam Wheater’s announcement that he would retire his Essex career at the end of the season, since when he has disappeared from view and Rossington is now established behind the stumps. He is a much more assertive batter and his bulk is making him one of the most recognisable figures in the game.

It is a safe assumption that Essex did not discuss how to survive Organ with the same focus that Hampshire gave to Harmer. Organ, trying to make his way as an opening batter offering an offspin option, has a tidy first-class record, nonetheless, with his 29 wickets before this game costing under 23 runs.

Along with Dawson, he kept Essex’s second innings honest. They had a first-innings lead of 75, knowing that another 150 would make them overwhelming favourites. The spinners were in tandem by the sixth over – perhaps uniquely this season – and, with half of Essex’s side dispatched for 51 just after lunch, the match was still very much alive.

Organ took two in two, finding nice dip to beat Alastair Cook on the drive and have him caught at first slip, then seeing Tom Westley caught at short leg, a firm clip into Aneurin Donald’s midriff. Paul Walter, covering up in front of off stump, was trapped lbw on the back foot. Dawson had Dan Lawrence lbw flicking across his front pad. Michael Pepper, who is standing in for the injured Matt Critchley, has had an unrewarding match – after his tentative first-ball dismissal in the first innings, he opted for a reverse sweep and picked out cover. Dawson picked his way through the tail.

Down in the furthest reaches of the County Ground, where the view is at its worst, two supporters watched Hampshire’s fielders agitating for wickets as Browne and Rossington began to reclaim Essex’s advantage. Seasoned county supporters, by and large, are not yet in the habit of checking the video replay when a contentious moment occurs. They draw on decades of experience, flavoured by a healthy seasoning of bias. Emotion often trumps facts, as in the real world beyond.

So it was that when Browne survived a catch at short leg, Hampshire fielders dancing around, a portly man in a red polo shirt complained “clearly out” from fully 90 metres away, slightly downhill. Next ball, Browne’s defiant innings came to grief as he turned Dawson to backward short leg. “Should have walked the first time,” said the man, a little self-righteously, his faith in some sort of religious intervention confirmed. It would have been surprising if God had had the time to intervene considering that a minority of fundamentalists claim He has been more involved in Roe v Wade than Browne v Dawson.

Minutes later, Harmer rode a blow from Abbott which brushed his chest on the way through to the wicketkeeper, Hampshire’s wailing for a wicket again refused. “They’re all cheating now,” said the man, before adding with no sense of irony: “Looked out from here.” All this time, umpires have been standing behind the stumps when clearly a better vantage point has existed all along.