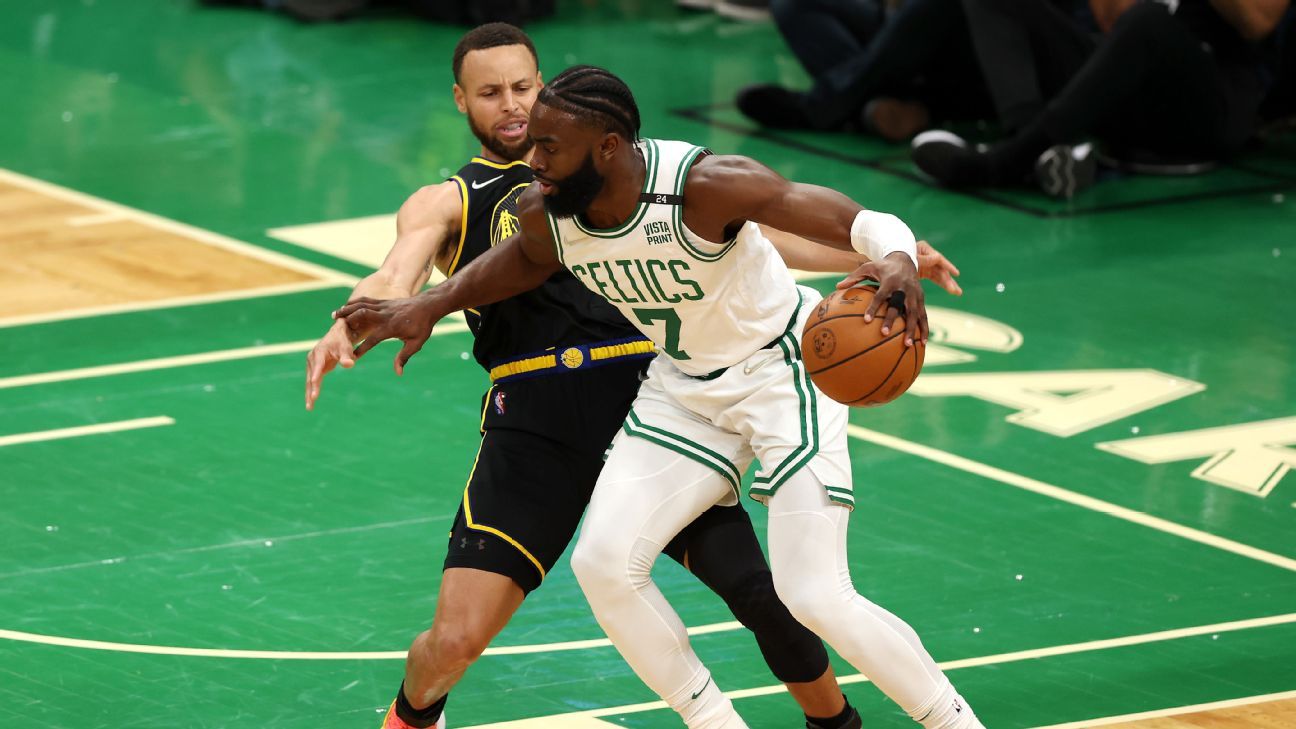 BOSTON — Once again, the Celtics found themselves being pummeled by the Golden State Warriors in a third quarter.

And as Stephen Curry‘s 3-pointer fell through the basket with 3 minutes, 45 seconds to go in the third quarter of Game 3 of the NBA Finals on Wednesday night, capping a 10-0 Golden State run and making it 83-82 Warriors, there was a collective groan from the sold-out crowd inside TD Garden:

Only, the Celtics — for the second time in this series — found a way to respond to a Warriors punch to the jaw in the third quarter with their own haymaker in the fourth, limiting Golden State to just 11 fourth-quarter points as Boston went on to win 116-100, lifting the C’s to a 2-1 series lead.

“I felt like our team really stayed poised in those moments,” Celtics center Al Horford said. “As you know, earlier in the year, that could have gone south quickly.

“But we stayed right with it and just locked in and didn’t panic and just continued to play.”

As Horford alluded to, Boston hasn’t been a team capable of doing that all season long. But since the Celtics flipped their campaign around for good in late January, they’ve proved to be incredibly resilient. Wednesday’s Game 3 victory saw Boston improve to 7-0 in these playoffs in games following a loss, as the Celtics have yet to lose back-to-back games this postseason.

“We didn’t hold our head down or anything. We called a timeout, regrouped, figured it out and made winning plays. I was definitely proud of the group for that.”

The Celtics had to do that because, once again, they failed to get any traction in the third quarter. Golden State has now outscored Boston by 43 points across the three third quarters so far in this series, as the Warriors have repeatedly been able to twist the Celtics into knots defensively.

That, of course, is driven by Stephen Curry, who finished with 31 points on 12-for-22 shooting in 37 minutes. He also generated a seven-point possession in the third quarter by hitting a 3 while being flagrantly fouled by Horford, allowing Curry to then hit the free throw, followed by Otto Porter Jr. knocking down another 3.

A minute later, a Curry 3 put Golden State up — and put Boston back on its heels.

But rather than fall apart, the Celtics responded. They went on an 11-6 run over the final few minutes of the third quarter to retake the lead heading into the fourth. From there, the Celtics outscored Golden State 23-11, holding the Warriors to just one basket over the first three minutes as Boston went on a quick 9-2 run to balloon its lead back up into double digits.

“For me, it was just be poised,” Celtics guard Marcus Smart said. “Just stay calm. We’ve been here before. They’re a really good team. They’re going to go on runs, but so are we. We just have to bolt down and go on our run.”

It helped that Boston had Robert Williams III patrolling the paint. While Tatum, Smart and Jaylen Brown all put up more than 20 points, five rebounds and five assists — becoming the first trio of teammates to accomplish that feat in an NBA Finals game since Magic Johnson, Kareem Abdul-Jabbar and Michael Cooper did it for the Los Angeles Lakers against the Celtics in 1984 — it was Williams who was a team-best plus-21 in 25 minutes, finishing with eight points, 10 rebounds, four blocked shots and a mountain of hustle plays.

“He’s a game-changer,” Horford said of Williams. “Rob is really a game-changer. We’re very fortunate to have a guy like that that impacts winning in the way that he does, because it’s beyond the numbers with him. It’s just all the things that he brings, being in the right places. I’ve been so impressed with Rob, just his ability to just continue to get better and learn.

“He learns. We talk to him, I feel like we can ask a lot of him and he always takes it in, figures it out and it’s better. But his stuff goes beyond the box score, the impact that he has on the game.”

Williams has seen that impact fluctuate from game to game throughout these playoffs, as he has been dealing with issues with his left knee for more than two months. He had surgery on his meniscus in that knee at the end of March, which knocked him out for the end of the regular season and the beginning of Boston’s first-round playoff series against the Brooklyn Nets.

He then suffered a bone bruise in that same knee in Boston’s second-round series against the Milwaukee Bucks, causing him to miss the final three games of that series as well as Game 3 of the Eastern Conference finals against the Miami Heat. Since then, Williams has been questionable every game — only to be cleared in the hours leading up to tipoff.

“It’s been rough,” Williams said of managing his knee. “Throwing everything at it. Usually it’s more sore the day after the game, obviously, adrenaline going down. But we did some different things today, got on the bike a little bit earlier before the game. I benefited from it.”

That he was feeling good was clear. Williams was all over the place on the court, frequently scrambling for loose balls, flying across the lane to contest shots and finding himself in the center of the action consistently.

“I’m constantly talking to Rob, just for the simple fact I know what he’s going through,” Smart said. “He’s hurting, and even though he’s hurt, he still wants to get out and help his team. But at the same time, he’s thinking about his career. Like I just told him, ‘You know your body. You know what you can withstand and what you can’t. But just know, we’ve got a chance to do something special. There’s no guarantees that we’ll be back here. If you can go, we’ll take 20 percent of you better than none of you.’

“He understood that, and he decided to go out there and put his big boy pants on and suck it up and go crazy.”

The Celtics spent the three days between their ugly Game 2 loss and Game 3 talking about the need to play with more energy and effort. That message was evident from the opening tip, as Boston immediately set the tone with its physical play at both ends. Boston won the rebounding battle by 16, including grabbing 15 offensive rebounds, and didn’t allow Golden State to speed things up, committing just 12 turnovers — including only one in the fourth quarter.

As a result, Boston is now two wins away from a championship. And after once again bouncing back from a loss — as well as a body blow from the Warriors during the game itself — the Celtics now have to do what they have so regularly failed to do in these playoffs: respond like this to a win.

“Another bounce-back from us,” Celtics coach Ime Udoka said. “My message to the group was, ‘We’ve done this after losses; let’s respond the right way after a win now.'”