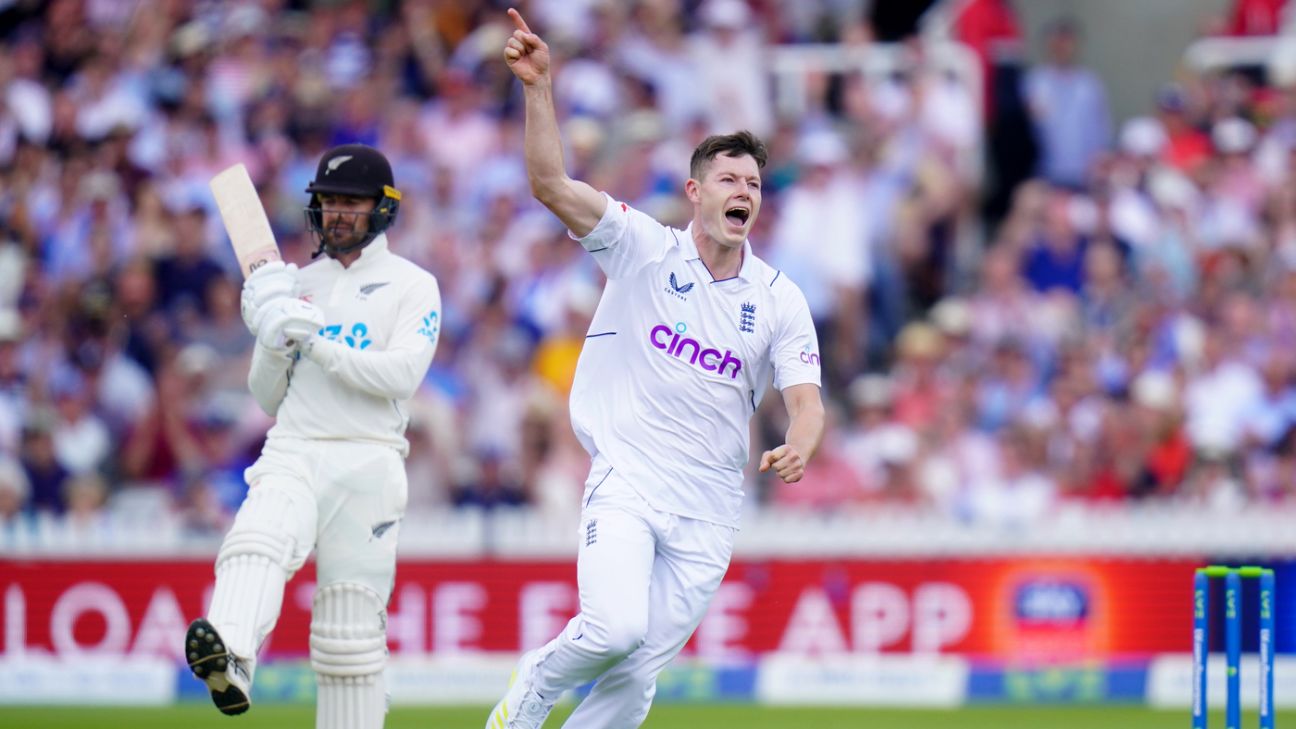 England ran rampant on the first day of the international summer at Lord’s, as the new captain-coach combination of Ben Stokes and Brendon McCullum enjoyed the perfect start in their efforts to resurrect the Test team’s fortunes. New Zealand were rounded up for 132 inside two sessions following Kane Williamson’s decision to bat first – although that was still something of an improvement on a position of 39 for 6 at lunch.
James Anderson, playing the 170th match of his Test career, and Matthew Potts, in his first, shared eight wickets between them as the first Test got off to an exhilarating start. If England began the series with, in Stokes’ words, a “blank canvas”, they were soon daubing pretty pictures for an expectant crowd – and such a rousing start might help squeeze a few more in through the gates in the days and weeks to come.
New Zealand were grateful for a counterattacking hand from Colin de Grandhomme, who helped eke out 87 runs for the last three wickets. When Kyle Jamieson hooked Anderson straight to fine leg in the first over after lunch the tourists were 45 for 7, but Tim Southee swung the bat in a 41-run stand and Trent Boult, picked in the XI after his late dash from the IPL, helped add a few more before Stokes himself ended the frivolity.

England’s openers, Alex Lees and Zak Crawley, then survived one or two hairy moments – most notably with their running between the wickets – during a six-over spell against the new ball, to prevent New Zealand wresting back any further momentum.

In true McCullum style, England charged headlong into their new era – literally, in the case of Jack Leach, who suffered a concussion when throwing himself full length over the boundary rope to prevent four and had to be substituted from the game.

Matt Parkinson, the Lancashire legspinner, was called in as Leach’s replacement for an unexpected Test debut, although New Zealand’s first innings was over before he had completed his journey from Manchester to Lord’s.

The morning could not have gone better for England. Anderson and Stuart Broad, back in harness with the new ball after being dropped for the tour to the Caribbean, claimed three early wickets before Potts, the Durham debutant, struck with his fifth ball and added two more for good measure during an impressive first spell in Test cricket.

Only two of New Zealand’s top six made it into double figures, a grim sequence which included Williamson scoring 2 from 22 balls before edging behind off Potts, with Ben Foakes swooping to his right for his maiden dismissal behind the stumps on home soil. Daryl Mitchell struck three retaliatory boundaries through the leg side, only to play on in Potts’ fifth over, and the new boy had a third shortly before lunch when bringing one back up the slope to clatter Tom Blundell’s off stump.

For the all the buzz around England promising a fresh approach to Test cricket, it was the familiar sight of Anderson and Broad taking the new ball that greeted the New Zealand openers, Tom Latham and Will Young. Stokes, who wore a one-off shirt in tribute to the hospitalised former England batter Graham Thorpe at the toss, confirmed that he too would have opted to bat, but was able to settle straight into his new role, orchestrating proceedings from mid-off.

It took Anderson, playing his first Test since helping to secure a draw at the SCG in January, a mere seven balls to find his groove once again. Young was lured into pushing outside off but might have got away with a fast, low edge had it not been for a fantastic one-handed catch from Jonny Bairstow, throwing himself to his left from third slip. Anderson bagged the wicket of Latham in his next over, with Bairstow again the catcher – this time throwing himself for the rebound after dropping the initial, chest-high chance.

Broad did not have to wait long to get amongst it either, luring Devon Conway into a hard-handed prod that again provided catching practice for Bairstow in the slips, leaving New Zealand deep in trouble at 7 for 3 in the eighth over.

Their woes were deepened by the impact of Potts, handed his cap before play by Steve Harmison after being backed by Stokes – another Durham and England man – for his debut. Potts had never played a first-class match before at Lord’s, but walked off at lunch with figures of 3 for 8 after living up to his billing as a deck-hitting catalyst of a fast bowler.

He was on the money from the outset, and his first victim could scarcely have been more illustrious, as Williamson was drawn into pushing at one in the channel. Mitchell looked more comfortable than most of his colleagues, but was undone by some extra bounce as he looked to defend from the crease, and although Blundell survived after being given out lbw – Michael Gough’s decision overturned by the detection of an inside edge – Potts got his man in the following over, his relentless line leaving New Zealand’s wicketkeeper uncertain of his response, and fatally late on an in-ducker.

There was nearly a fourth for Potts, following a tribute to Shane Warne with the interval looming, as de Grandhomme survived after being hit on the front pad. This time DRS sided with Gough’s not-out decision with confirmation of an inside edge, despite suggestions that the ball might have brushed the pad first.

Jamieson threw the bat at four of his five deliveries after the break, before picking out Potts in the deep, but Southee was more successful in pushing England back, striking four boundaries in 26 off 23 balls. He fell in identical fashion to Anderson’s short ball, and the removal of Ajaz Patel by Potts with the first ball of his second spell left both seamers contemplating a spot on the honours board. Potts limped off with cramp shortly after, replaced mid-over by Stokes, and the new captain finished things off when Boult’s unorthodox stylings finally let him down.

Alan Gardner is a deputy editor at ESPNcricinfo. @alanroderick