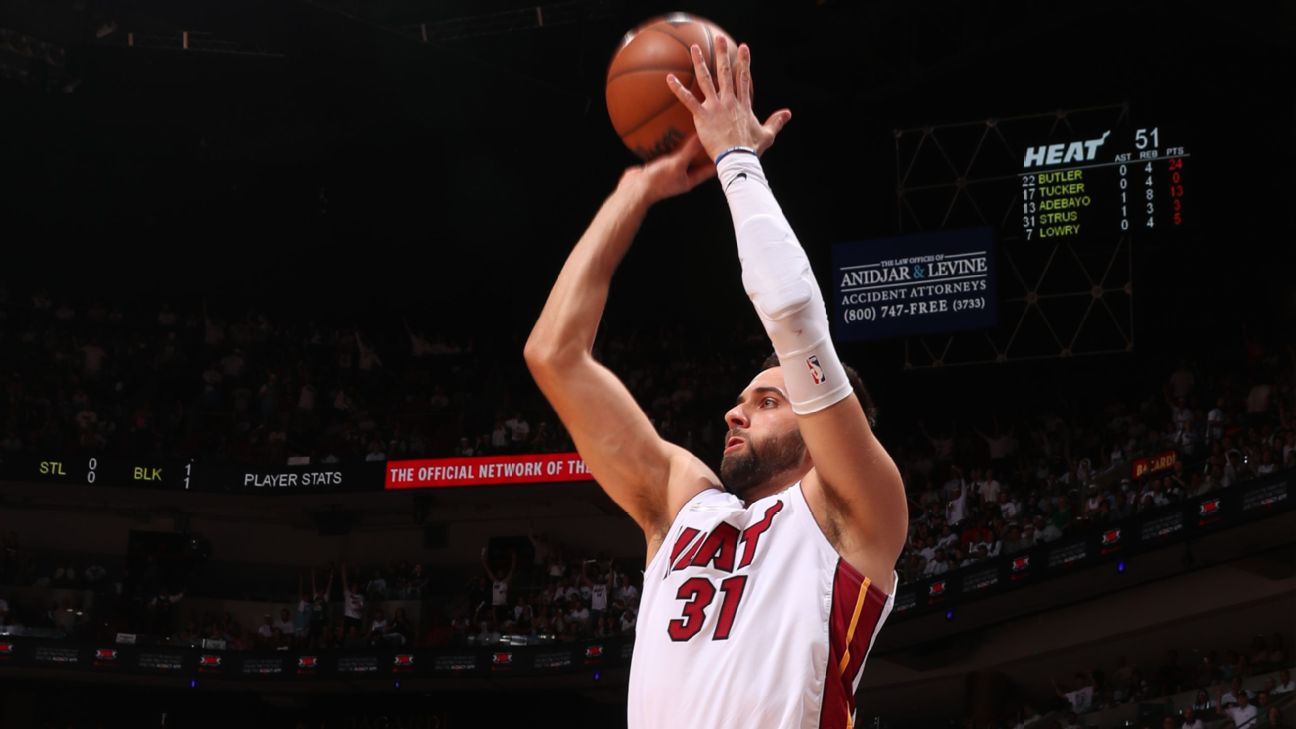 MIAMI — As the Miami Heat digest a “heartbreaking” 100-96 loss to the Boston Celtics in Game 7 of the Eastern Conference finals, Erik Spoelstra and his staff believe that a momentum-changing overturned call in the third quarter will provide a “case study” for the NBA as far as replay reviews go moving forward.

The call in question came with 11:04 remaining in the third quarter, when Heat guard Max Strus knocked down a 3-pointer deep in the corner that cut the Celtics’ lead, which had been as many as 17 earlier in the first half, to 56-54.

After several minutes of game action — during which the Celtics put together another run of their own — the call was overturned by the NBA replay center in Secaucus, New Jersey.

Spoelstra admitted he was “in shock” after the points were taken off the board.

Spoelstra also said he didn’t immediately see the replay of the call in question, which appeared to show Strus’ feet just touching the out-of-bounds line.

“I was in shock,” Spoelstra said. “I was asking [assistant coach] [Chris Quinn] about that. The fact that it happened, three to four, five minutes in game time, that does change the context of how you’re playing. We were starting to gain some momentum. You feel like it’s a seven-, eight-point game and you look up and it’s a 13-point game, and there’s no other explanation for it other than it’s gone back to the league offices. You feel like if it happens like that, it should happen immediately and you can adjust accordingly.”

Despite his frustration with the timing of the overturn, Spoelstra made it clear several times that that was not the reason the Heat lost the game.

“Look, that’s not the reason we lost,” he said. “We still had plenty of opportunities. We just couldn’t get control of the game. A lot of that was Boston. We didn’t stop grinding and we gave ourselves a shot at it at the end. We just couldn’t make enough plays during the course of the game. It felt like most of the game we were grinding from an 8- to 10-point deficit.”

Moving forward, Spoelstra knows the play in question will be discussed in future league meetings.

“I’m sure they will look at that, and we’ll probably be the case study for it,” Spoelstra said. “I’m OK if it happens the way it used to. They would look at it at the next foul or break and look at it and notice it, but it was probably 10 minutes of real time — somebody check on that.

“I’m not crying or whining. Come on, we got beat. This was two competitive teams going at it. We had a crack at it at the end. Even as uneven as the game seemed, we had a crack at it. Our guys are never going to, like, not think we have a chance at it.”

As much as Spoelstra tried to push his frustration to the side, he knows that the call — and the momentum shift — altered the way his group was feeling in the minutes during and after Strus’ shot — a shot that will be forever be written in the box score as a turnover with Strus stepping out of bounds.

“That was so unusual for us to be grinding and then start to get some momentum, and then it was like, oh, hey, by the way, take away that 3, with no explanation,” Spoelstra said. “That’s the human side of it. That’s not the complaining side of it. Who knows if that would have changed anything, anyway.”

To Spoelstra’s point, the Heat still had an opportunity to win the game in the waning seconds, even after being down by 7 points with just over a minute left. After several clutch shots and some questionable decision-making by the Celtics, Heat star Jimmy Butler came racing down the floor with the Heat trailing 98-96, and launched a 3-pointer with about 17 seconds remaining that would have given the Heat the lead — and, potentially, an improbable win.

But it wasn’t meant to be, as Butler’s shot hit off the rim, and the Celtics grabbed the rebound and iced the game.

After it was over, Spoelstra said he had no issue with Butler’s decision.

“I thought it would have been an incredible storyline for Jimmy to pull up and hit that 3,” Spoelstra said. “I love that about Jimmy. That was the right look, and I just thought as it was leaving his hand, I thought for sure that was going down.

“It was a good, clean look, definitely better than anything we could have designed. It was a shame it didn’t end that way, but I can’t compliment Boston enough.”

Butler, who finished with 35 points and played all 48 minutes in Game 7, had no qualms about the shot.

“My thought process was go for the win,” Butler said. “Which I did. Missed a shot. But I’m taking that shot. My teammates liked the shot that I took. So I’m living with it.”

After single-handedly carrying the Heat’s offense throughout the series, Butler was hard on himself after finishing arguably the most impressive series of his career.

“Not good enough,” Butler said. “I didn’t do my job. Stats don’t mean anything, as I say over and over again. The Boston Celtics did what they came out here to do in this series. I learned that I have to be better, and I will be better.

“Get back to the lab and have an opportunity to work out with these guys over the summer, and we’ll come back better than ever.”

As for what’s next, Butler remains confident the Heat have enough to cross the threshold and get back to the Finals next season.

“Figure out a way to be consistent,” Butler said. “I think we had enough — I think we do have enough. It sucks because you don’t know who is going to be on roster any given year, you know what I’m saying. I’m just grateful for the opportunity to play with the guys that I did have to play with. It’s been like that every year in the league.