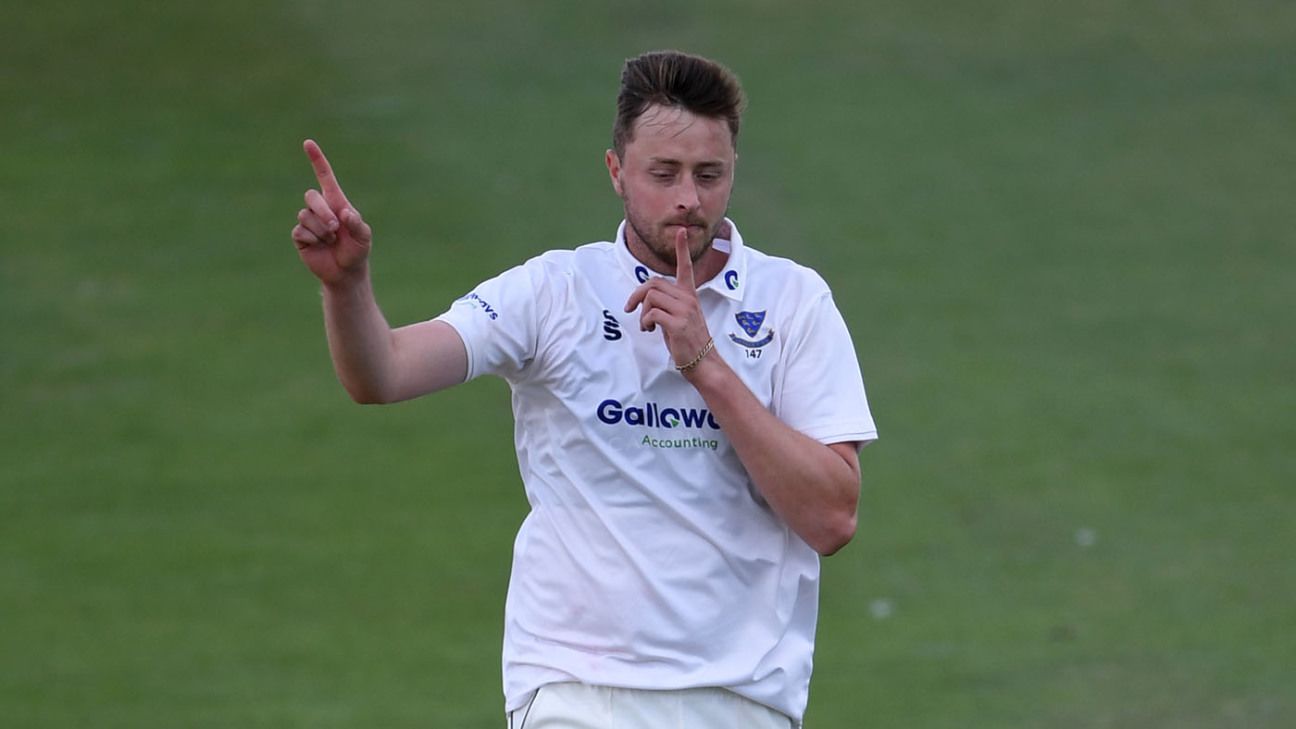 Around the time that Matthew Potts was summoning another irresistible fast-bowling performance that seems bound to catapult him into an England Test squad for the first time, Ollie Robinson was bowling off-spin for Sussex.

One looked hungry for an England debut, one looked as if his England career was in abeyance. Robinson bowled only seven overs in the day, three of seam, four of spin. He would have been better with a literal lack of hunger before the match – the after-effects of his food poisoning on the eve of the game, according to Sussex’s head coach, Ian Salisbury, remained debilitating.

“Ollie wasn’t himself all match after the food poisoning,” he said. “He just couldn’t perform. The sickness affected him massively, he had two drips on the first day.”

In theory, Robinson could bowl out the New Zealanders at Hove next week and go to Lord’s with his form and reputation restored, but the squad is expected to be chosen before that game with a series of gatherings and fitness assessments in mind. To name Robinson in the squad – and also to allow him to have a go at the tourists to prove his worthiness – would be a considerable show of faith.

In some ways, England’s decision will reflect their view of county cricket because Robinson is the archetypal county cricketer in an age when generally they are looking for nothing of the sort.

As a county-style bowler, a player hardly in vogue, his returns over four seasons were exceptional. He had learned to seek out seam or swing depending on conditions. And he had an excellent record with the old ball as well as the new. He forced his selection through performance.

Thirty-one Test wickets at 21.28 in his maiden summer of 2021 suggested he had made the transition, but even with such an outstanding record, his suitability for international cricket remains under question. There were the dubious social media posts, the undercurrent of unreliability. But he was indisputably one of England’s premier seam bowlers and as such he was awarded his first central contract in October.

Perhaps he is not the sort to be embraced by the system. Not everybody is. His stamina and fitness levels for Test cricket were brought into question by England’s bowling coach, Jon Lewis, in January, before he broke down before the start of a Test series in the West Indies that represented his chance to claim a regular spot. Then came the recent Championship match at Worcester where England blocked his inclusion on fitness grounds and he pleased a tooth infection.

In Leicester, thanks to food as yet unknown, he has failed to make his case. In only his second Championship appearance of the season, he bowled only one over on the first day because of his stomach upset. Whilst not knowing his true medical state by the final day (and it should not be airily dismissed) he would have been better being sick with exhaustion on the pitch. He still had questions to answer and he flunked the examination.

He bowled three overs with the second new ball, taking a wicket with a loosener as Ben Mike checked a drive to extra cover, where Cheteshwar Pujara held a fine diving catch, and was then withdrawn from the attack. He reappeared with the second new ball still only 12 overs old to bowl four overs of inconsequential offspin. Then no more. Barring, presumably, a bit of nausea and a lie down.

It should be conceded that he is a respectable offspinner. As a youngster, he was a batter who bowled spin, he has bowled it at times for Sussex with some success and he sent down three overs in this guise in sunglasses during the Adelaide Test in December. But on the day that Sussex needed a matchwinner and England needed a signal, circumstance dictated that he could provide neither.

An increasingly pedestrian fourth-day surface at Leicester offered slow turn and was ultimately so dispiriting for all the bowlers that Leicestershire, still 45 runs behind at the start of the final day with only five wickets left, survived at 333 for 9 with a lead of 93, with Harry Swindells and Callum Parkinson stubbornly repelling 46 overs in an eight-wicket stand of 111.

The result leaves both counties without a win at the foot of the Second Division, but it will be Sussex who will be deflated after seemingly being destined to claim their first Championship victory since April last year only for 27 overs lost to afternoon showers to cost them dear. Even when Delray Rawlins prised out both Swindells and Parkinson in rapid succession, Swindells’ 57 from 178 balls coming to grief at short extra, Parkinson (45 from 176) bowled by a quicker one, there was no Robinson to be seen.

But if not Robinson then whom? The minute that England’s revamped trio of Rob Key, Brendon McCullum and Ben Stokes begin to discuss their fast-bowling stocks, their sense of optimism will come under serious challenge.

Of the 11 specialist quicks to play in a Test in the last two years, only five featured in this round of the Championship. Of those, the old stagers, James Anderson and Stuart Broad, were as resilient as ever and are certain selections after being excluded from an experimental West Indies tour party. Craig Overton had a knee-injury scare before returning to duties in Somerset’s win in Bristol, but Robinson must now be a major doubt.

Some of the absentees might yet make a surprise inclusion in the England squad. Chris Woakes remains afflicted by shoulder and knee trouble; Olly Stone and Sam Curran are recovering from stress fractures of the back (Curran bowled two overs of spin himself at Beckenham); and Jofra Archer and Mark Wood will attempt returns from elbow operations at some point this summer in white-ball cricket.

Two absentees from the Roses match, however, cannot be entirely ruled out. Lancashire’s Saqib Mahmood has a stiff back and little cricket behind him, but there is no diagnosis about a serious injury. The same can be said of Matt Fisher, whose briefly successful start to the season at Yorkshire quickly gave way to fears about a “hot spot” in his back and estimates of a precautionary four-week lay-off that has now elapsed. Tom Helm, of Middlesex, has long been monitored, and has 14 wickets at 12.28 but he again is far from fit.

Fast-bowler injuries are not just afflicting England wannabees. Don Topley, the former Essex seamer, and commentator, calculated that around 30 quick bowlers were absent for the start of the season. Since then, the counties have undertaken six matches apiece in a relentless opening phase of seven matches in as many weeks. Demanding pitches, and high scores have made them the equivalent of seven back-to-back Tests. The Dukes balls are said to be not swinging as much and are prone to going out of shape. Perhaps fast bowlers are breaking down just by thinking about it.