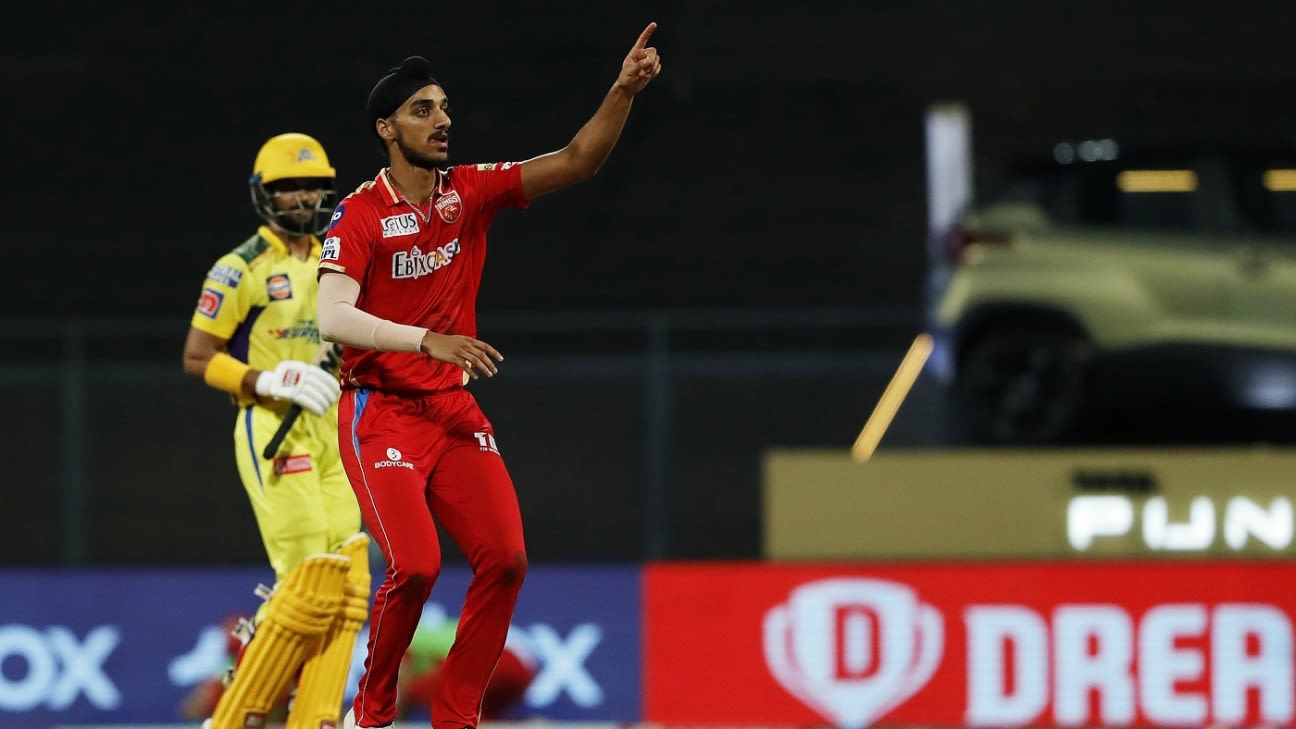 Punjab Kings completed the double over Chennai Super Kings, closing out a tight game for a fourth win that moves them back to within touching distance of the top four. Shikhar Dhawan scored a stately, unbeaten 88 from 59 balls to anchor Kings’ rethought approach to setting a target, and although Ambati Rayudu kept Super Kings in the hunt until the closing overs, his 39-ball 78 was not enough to avert a sixth defeat from eight games.
On the same pitch that Lucknow Super Giants had successfully defended 168 against Mumbai Indians the previous evening, Kings’ total of 187 for 4 always looked too much of an ask. Each of the three previous results at the Wankhede had gone the way of the team batting first, and although Ravindra Jadeja and Super Kings’ preference was to chase, a lack of contributions at the top of the order again undermined their chances.
Super Kings had looked to be heading for a much heavier defeat, only for Rayudu’s innings, which included 13 boundaries, to repeatedly jangle the nerves of Mayank Agarwal and his men. Sandeep Sharma was collared for 23 in the 15th over, and with MS Dhoni waiting in the wings, and coming off the back of a vintage display of finishing in his previous outing, Super Kings could not be ruled out going into the final stretch.
But Rayudu was visibly tiring and when he was cleaned up by Kagiso Rabada in the 18th, CSK were left needing 35 off 13 – an equation which became 27 off the last over, to be bowled by Rishi Dhawan. Dhoni smashed the first one into the crowd to threaten a reprise, and a wide from the next ball left Rishi feeling the heat. But a well-executed yorker was followed up by Dhoni holing out to deep midwicket and Punjab fans could breathe again.

Kings change gears
The Kings’ approach to the first half of the tournament was to try and batter the opposition senseless from the off. They attacked throughout, but were bedeviled by wickets falling at an equal rate. Those tactics resulted in a few eye-catching wins and several costly implosions – none more so than in their last outing, when they were dismissed for 115 and lost to Delhi Capitals by nine wickets with 57 balls to spare.

Here, after being inserted for the seventh time in a row, they took a more traditional approach, throttling back at the top and then opening up with wickets in hand. A score of 37 for 1 at the end of the powerplay gave Kings their slowest start to an innings this season, but Shikhar and the recalled Bhanuka Rajapaksa – the Sri Lankan back in the side for the first time since victory over Super Kings at the Brabourne three weeks ago – settled into a steady stand that provided the foundation for an imposing total.

Rajapaksa needed some luck, dropped twice before reaching double-figures, but he made good on it to help Kings register their first century partnership of the campaign. The pair hit just six boundaries – one of which should have resulted Rajapaksa being caught at deep midwicket – in the first half of the innings, as Kings reached 72 for 1. But just as Super Giants did from an identical score in Sunday night’s game at the Wankhede, they effectively raised the tempo through the second ten.

Shikhar lights the way
A tickled single in the second over of the match made Shikhar, playing his 200th IPL match, only the second man after Virat Kohli to score 6000 runs in the competition. By the time he had moved into the 60s, smashing back-to-back boundaries down the ground off Dwayne Bravo in the 16th over, Shikhar had notched more than 1000 of them against Super Kings alone. This was his ninth 50-plus score, and eventually enough to sink the Yellow Submarine.

Shikhar’s approach set the template for his side, as he ticked along at just above a run-a-ball for the first half of the innings. A slog-swept six against Maheesh Theekshana and a driven four off Dwaine Pretorius were his only boundaries until he tucked into Mukesh Choudhary in the 12th, rattling off a pair of cuts that beat the cover sweeper on both sides, and then flicking four more off the pads through the ring with fine leg up. A 37-ball fifty kept Kings on course and, when Rajapaksa fell in the 18th over, Shikhar handed over the strike to Liam Livingstone, whose seven-ball cameo included taking Pretorius for 4-6-6.

Super Kings’ lack-of-powerplay
Super Kings have had problems getting their innings off to good starts all season, and once again they shipped early wickets in the chase. Sandeep was one of three changes to the Kings XI, as they sought greater batting depth at the expense of two genuine bowlers – Vaibhav Arora and Nathan Ellis; Sandeep had gone wicketless in his only previous appearance, the season opener against Royal Challengers Bangalore, but he struck with his fifth ball on this occasion, Robin Uthappa splicing a pull to midwicket.

Mitchell Santner was again asked to perform the Moeen Ali role at No. 3, but he struggled along to 9 off 15 balls – four of which came via thick outside edge past the keeper – and was the second wicket to fall, in the sixth over, as Arshdeep Singh plucked out his leg stump. That dismissal meant Super Kings’ batting average in the powerplay for this season had dipped to 20.50 – the lowest of the ten teams. Their position in the match then got worse in the following over, as Rishi Dhawan, making his first IPL appearance since 2016, found a way through Shivam Dube to leave them three down and off the pace.

Rayudu resurrects chase
With the fall of Ruturaj Gaikwad, Super Kings were 89 for 4 in the 13th over and seemingly well out of contention, only for Rayudu to unleash a display of clean hitting on the way to his first fifty of the season. Six times he launched the ball into the stands, including a brutal sequence of three in a row off Sandeep during an over that brought Super Kings back to within range. But with the asking rate down to 47 off the last four, Arshdeep delivered an excellent over of wide yorkers that cost just six runs, and Rabada’s dismissal of Rayudu meant there was too much to do – even for Dhoni.