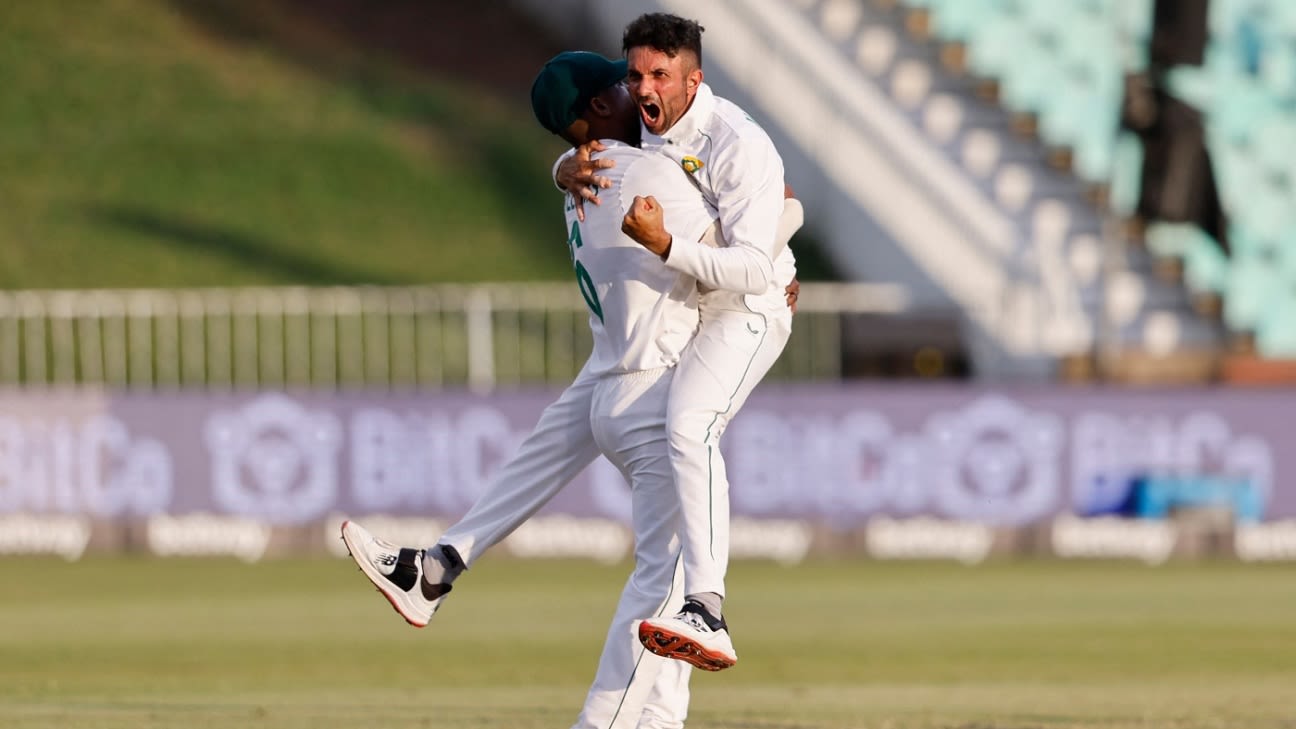 The visitors triggered two collapses to bowl South Africa out for 204 in their second innings, but have lost their way after that

South Africa are seven wickets away from winning their first Test in Durban since 2013 and going 1-0 up in the two-match series against Bangladesh. After South Africa asked Bangladesh to complete their highest successful Test chase, and fourth-highest at Kingsmead, the new-ball bowlers, both spinners, plucked out three of the top four in just six overs to leave the visitors facing an improbable final-day task.

It was the first time that South Africa used spin to open the bowling in a home Test and they made incisions at both ends. Simon Harmer had Shadman Islam caught at slip off his second ball, while Keshav Maharaj bowled Mahmudul Hasan Joy and had Mominul Haque out lbw to pick two wickets in his first three overs.
Along the way, Maharaj entered the top ten among South Africa’s leading wicket-takers in Test cricket, and displaced Paul Adams to become their most prolific Test spinner since readmission.

Bangladesh’s top-order collapse undid a fine display in the field that saw them dismiss South Africa for 204, forcing two collapses along the way. They took four wickets for 32 runs in a strangling afternoon session, in which South Africa only scored 52 runs, and then finished off strongly after tea, with five wickets for 36 runs.

Their performance was even more impressive because they only had Taskin Ahmed’s services in limited capacity after he picked up a shoulder injury, which will end his tour after this match. Taskin, however, still bowled 11 overs and picked up two important wickets. Ebadot Hossain stepped up in Taskin’s absence and bowled with good aggression, but it was Mehidy Hasan Miraz who took on the bulk of the bowling load. He delivered 35 overs of crafty offspin and finished with three wickets.
Despite heavy overnight rain – of 50mm, two-thirds the April average – play started on time on the fourth morning and Dean Elgar set South Africa up with his second half-century of the match, but it was not without its chances. Bangladesh thought they had Elgar out on 7 in the second over of the morning when he was beaten by a Mehidy delivery that drifted in and hit the back pad, but the South Africa captain was given not out on field, and Bangladesh’s review was unsuccessful on umpire’s call.

Elgar continued to taunt Bangladesh and had words with Ebadot, who brought some fire to Bangladesh’s effort when Elgar drove a ball back to him and Ebadot threw the ball back at the batter in frustration. Umpire Adrian Holdstock had to ask the pair to calm down. Ebadot’s reward came against the other opener, Sarel Erwee, who worked his way to 8 off 50 balls before Ebadot beat his inside edge with a full delivery that angled in. Though Erwee indicated he had hit the ball, Bangladesh reviewed and Ultra Edge revealed no contact while ball-tracking confirmed it was going on to hit middle and leg. South Africa’s opening stand was broken on 43.

That was the only wicket to fall in the morning session, despite Bangladesh creating several more chances. Elgar was dropped off Mehidy at first slip, on 34, and dropped again at second slip, on 43. He went on to reach his half-century off 73 balls when he punched a Khaled Ahmed short ball wide of gully.

Then Keegan Petersen was struck on the back pad by Khaled and Bangladesh appealed. Marais Erasmus gave it not out, Khaled wanted a review, but Mominul did not even consider it. But replays showed the ball would have gone on to hit the stumps. It proved to be a costly missed opportunity for Bangladesh as Petersen’s partnership with Elgar grew to 68.

Taskin eventually removed Elgar after the break, on review after Erasmus was unmoved when Elgar was struck low on the front pad. Ball-tracking showed it was hitting the top of middle stump and Erasmus had to overturn. That was the eighth decision overturned in the game and the fifth off Erasmus.

Elgar’s dismissal sparked a mini-collapse. Five overs later, Petersen nudged Mehidy to short leg where Mahmudul took a good catch low down. In the next over, Ebadot made Temba Bavuma play at a good-length delivery, found the edge, and Yasir Ali went one-handed to his left at slip and took a fantastic low catch. With two new batters at the crease, Bangladesh applied the squeeze, conceded 15 runs in the next six overs, and Kyle Verreynne was given out lbw after missing a slog-sweep off Mehidy. Verreynne reviewed and the decision was overturned, but two overs later, he reverse-swept Mehidy and under-edged a catch to Shadman Islam at silly point, who claimed another sharp catch, just off the ground.

South Africa approached the post-tea session with a clear intent to attack. They scored 47 runs in 12.5 overs, but their plan worked in Bangladesh’s favour. Mehidy removed an edgy Wiaan Mulder, who was lured into the drive and edged to slip in the third over after tea. Taskin had Maharaj trapped lbw and then Bangladesh effected the twin run-outs of Harmer, who was found short of his ground after a direct hit from deep square-leg, and Lizaad Williams. Bangladesh would have been pleased with their work despite the magnitude of the target, before it came undone in six overs at the end of the day.