March Madness – Are the 2022 men’s and women’s NCAA tournaments more upset-friendly than usual? 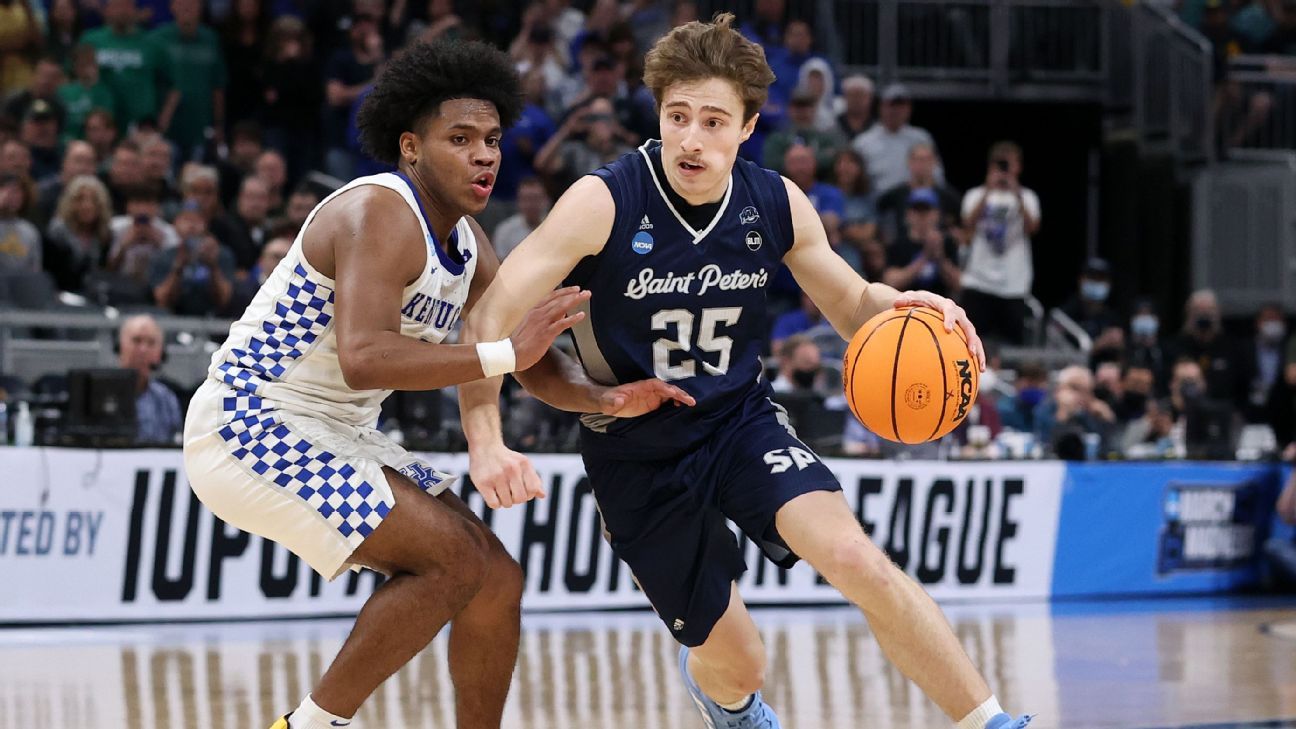 Are upsets contagious? Not in actuality, no, but you wouldn’t know it from checking the 2022 men’s and women’s NCAA tournament brackets.

In two otherwise very different championship events, 16 remaining teams can testify to the true madness of March. The average seeds of the Sweet 16s in both brackets are lower than their respective historical averages.

Is this going to be the new normal? Let’s consider what we’ve seen in both tournament fields thus far.

Hassan Drame’s easy layup grabs the lead late in overtime for Saint Peter’s in a shocking 85-79 win over Kentucky.

Complete your bracket by selecting the winner in each of the games in the NCAA tournament from the Sweet 16 to the championship. Tournament Challenge Second Chance

At first glance the numbers appear very different in the men’s game compared to the women’s tournament (below). It is a big deal, for example, that the Gonzaga men have reached the Sweet 16 for a seventh consecutive time. People stand at attention before this fact and note that in the modern tournament era only Duke and North Carolina have achieved that feat before.

The UConn women, of course, say, “Isn’t that cute?” — or at least could be pardoned for thinking it. The Huskies just reached their 28th consecutive regional semifinal. UConn has been in every Sweet 16 since the field expanded in 1994.

That kind of multi-decade run will be difficult to match in a men’s version of the game where top seed Baylor and No. 2 seeds Kentucky and Auburn are already back at their respective campuses. The early exit recorded by the Bears, for example, marks the fourth time in the past four tournaments that a top seed has failed to reach the Sweet 16. Virginia and Xavier both met this same fate in the 2018 bracket, as did Illinois last year.

At least Baylor forced overtime in the round of 32 before falling to North Carolina. Conversely, Kentucky didn’t even make it out of the round of 64. The Wildcats had the misfortune of being bracketed with a team of destiny in the form of No. 15 seed Saint Peter’s. The Peacocks then defeated Murray State and will face Purdue in an East Regional semifinal in Philadelphia.

Shaheen Holloway’s team has company as a surviving double-digit seed. No. 10 seed Miami and No. 11s Michigan and Iowa State make the average seed in this Sweet 16 the lowest it’s been since, well, last year.

Do keep in mind, however, that the 2021 bracket set a record in that regard. In fact, three of the past four men’s Sweet 16s have weighed in with an average seed weaker than 5.0.

Lauren Jensen discusses how it felt draining the go-ahead 3 against her former team as the Bluejays upset Iowa.

With the top four seeds in each region hosting home games through the second round, the women’s bracket consistently delivers more chalk than the men’s. Since the field expanded to 64 teams in 1994, for example, a whopping 96% of No. 1 seeds have advanced to the Sweet 16.

That trend held true in 2022, as top seeds South Carolina, Stanford, NC State and Louisville all safely navigated their way to the regional semifinals. Just below the top line, however, there were surprises in abundance.

Creighton‘s stunning upset of No. 2 seed Iowa in Iowa City stands out as one of the few shockers that was also a close game. Lauren Jensen‘s 3 with 15 seconds remaining sealed the 64-62 victory for the Bluejays. Later that same day, South Dakota held the lead from wire to wire in a bracket-wrecking 14-point win at No. 2 Baylor.

Monday brought more of the same. No. 5 Notre Dame went into Norman and defeated No. 4 Oklahoma soundly. Kim Mulkey’s No. 3-seeded LSU hosted Ohio State in Baton Rouge only to come out on the short end of a 79-64 final score. For its part, No. 4 seed Arizona lost at home by 18 to North Carolina. Three other top-seed hosts — Indiana, UConn and Tennessee — advanced, but barely.

Creighton and South Dakota are No. 10 seeds, and this marks the first Sweet 16 to feature two double-digit seeds since 2018. ESPN’s Mechelle Voepel, Charlie Creme and Alexa Philippou believe the much-talked-about parity has actually been a part of the game for a while now, but there’s nothing like a wild second round to bring that point home.

Monica McNutt details how South Dakota dominated Baylor to eliminate them from the tournament.

With lower seeds achieving high visibility in both the men’s and women’s brackets, it’s natural to ask whether some larger pan-basketball force could be at work here. The answer there might be yes, but with respect to “forces,” plural.

As Voepel, Creme and Philippou indicated with their usual astuteness, the women’s game does appear to be experiencing greater parity than it did in past years. Any single NCAA tournament will be an exceptionally noisy measurement of that particular signal. Still, it’s true that the average seed of Sweet 16 teams tended to hover around the 3-seed line two decades ago and now might be creeping close to a 4.

Conversely, the men’s side has been a relative Mardi Gras of parity ever since John Wooden decided to call it a day in 1975. This kind of unpredictability can, paradoxically, include a year such as 2019 in which high seeds do exceptionally well in the NCAA tournament. Even Saint Peter’s was taken to overtime by that plucky Kentucky squad, after all. One additional free throw by the Wildcats in regulation could have upended a good deal of this “trend” talk.

Crazy upsets on both the men’s and women’s sides aren’t necessarily the new normal, but having not one but two single-elimination tournaments means those shockers will always be a distinct possibility.

In 2022, the possibility became a reality in both brackets.