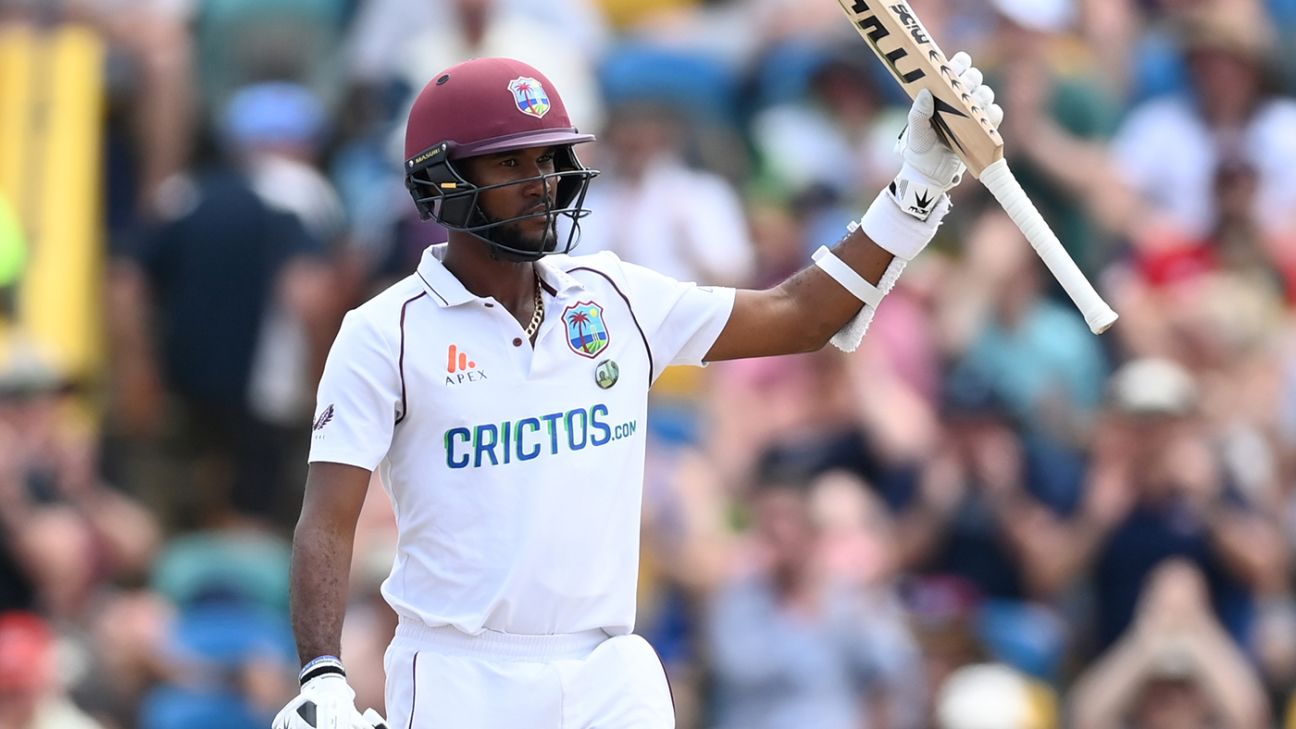 The Kensington Oval DJ had tried with a track that was positively thumping while the one in the middle was as flat and lifeless as a piece of blank vinyl. In the end, the man on the decks resorted to the mellow tones of Ben E King’s Stand By Me, as if pleading with those watching to stick around and see out the day.

It was, after all, Test cricket they were watching in pure form, not jazzed up or enhanced by anything, not least the pitch that meant “attritional” was the theme of the day.

The fact it was the theme for a third day running had other words springing to mind instead but took nothing away from Kraigg Brathwaite sticking around for a marathon 160 compiled over more than 11-and-a-half hours, an innings which dragged West Indies to 411 all out in response to England’s first-innings 507 for 9 declared. A deficit of 96 runs at least offered some potential for an intriguing final day.
It took nothing away from Jack Leach either, as he epitomised England’s toil in the field with three wickets for 118 runs in 69.5 overs, by some distance more than twice as many overs as either Ben Stokes or Saqib Mahmood, who claimed two wickets each.

By the time bad light ended play two overs before the scheduled close on day four, England had extended their advantage to 136 runs at 40 without loss in their second innings with Zak Crawley unbeaten on 21 and Alex Lees not out 18.

With no real sign of the surface breaking up yet and with only 19 wickets falling across four days, it was hard to see England having time to make a competitive declaration and then bowling West Indies out, but stranger things have happened.

West Indies thought they’d made something happen when Crawley was struck on the knee roll by Kemar Roach, but Crawley overturned his dismissal when ball-tracking showed the delivery was missing leg stump.

Veerasammy Permaul got one to turn emphatically from the rough outside off stump to almost bowl Lees through the gate, and although it missed everything, including the gloves of keeper Joshua Da Silva for a bye, it might prove informative for the final day.

Leach finally prised out Brathwaite, who had faced 489 deliveries for his knock, with a gem that belied the fact he had bowled 63.4 overs for just one wicket to that point. As satisfying as his second must have been, Leach’s celebration was understandably muted after equally long hours of hard graft culminated in Brathwaite’s dismissal, pressing forward in defence against the third new ball which pitched on middle and leg, turned and clipped the top of off stump before tea.

Having claimed just one wicket in the morning session, England took 3 for 45 in 27 overs during the afternoon in what felt like an action-packed period of play compared to the previous two days.

Jason Holder fell on the second ball after lunch without adding to his tally of 12 to give Mahmood his maiden Test wicket. Into his 14th over of the match when he bowled centurion Jermaine Blackwood – on 65 at the time – off a no-ball, Mahmood had to wait overnight and until his 18th over before he had Holder well caught, top-edging high towards Matt Fisher, who had to wheel round at mid-on and run back to snaffle the chance, holding on as he went to ground.

Chris Woakes had been used sparingly but he struck after Brathwaite fell to remove Roach lbw, the dismissal upheld on umpire’s call when DRS showed the ball was just kissing leg stump.

After the interval, with the hosts eight wickets down, Mahmood claimed his second scalp, trapping Permaul lbw, and then Leach got his third, hard-won wicket when he had Da Silva out lbw for 33 with one that rapped the pad in line with leg stump.

Stokes claimed the only wicket of the morning session, removing nightwatchman Alzarri Joseph, who put on 52 runs for the fifth wicket opposite Brathwaite and faced 75 balls for his 19 runs before slashing a shorter, wider delivery towards gully, where Dan Lawrence took the sharpest of catches moving to his left.

Lawrence had earlier been on the receiving end of a Joseph six – a highlight of another sedate session, powered over deep square leg – adding to his two fours, one of which came via a glorious cover drive off Lawrence.

Valkerie Baynes is a general editor at ESPNcricinfo