Pak vs Aus 2nd Test – More about enjoyment than anything else 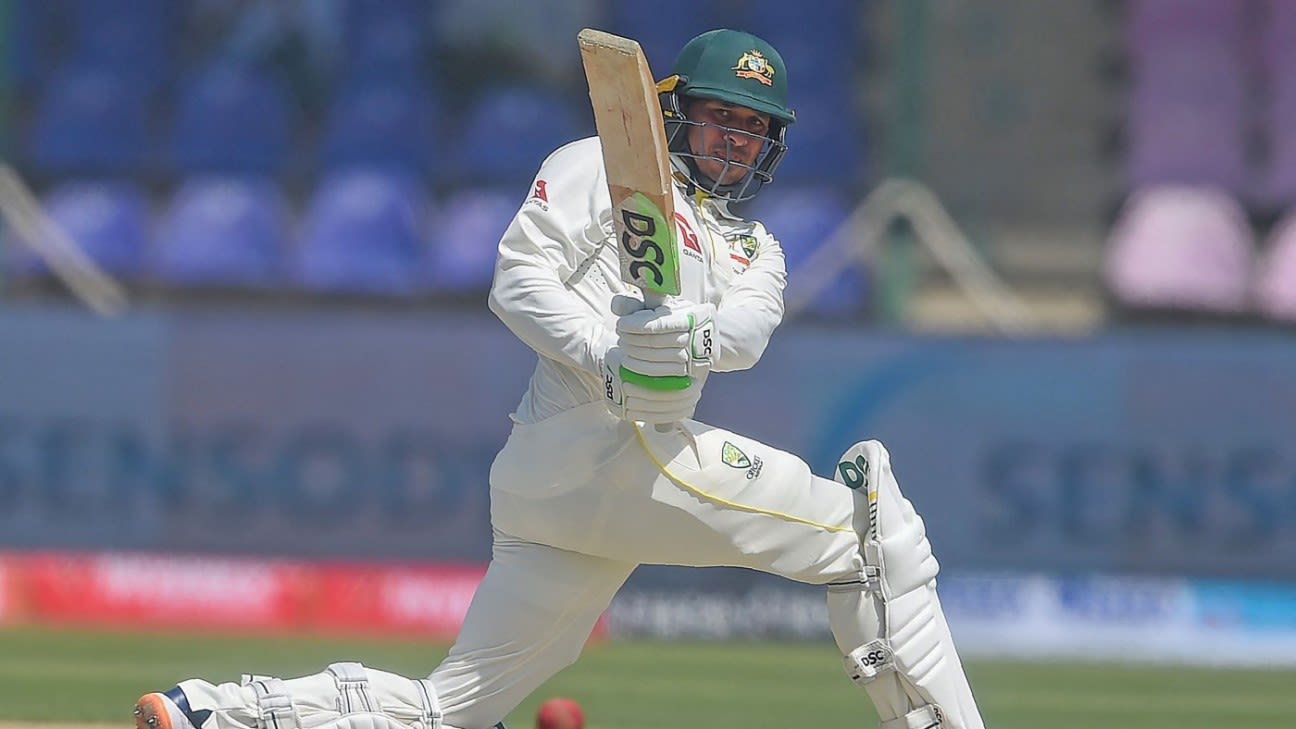 “This is where the Khawajas are from. This is my home”, he said after a century in the country of his birth

He wasn’t going to miss out this time. With a nudge into the leg side, Usman Khawaja ran through for his 100th run. Another Test hundred, but not just any Test hundred.
Having fallen three runs short of the milestone in Rawalpindi – near the city of his birth Islamabad – a few days ago, the celebrations could come in the city that his family hails from. He had four relatives in the stands in Karachi after all.

“This is where the Khawajas are from. This is my home,” he told the host broadcaster. “Would have been nice to get a hundred both [ in Rawalpindi] and here, but I’ll take this one.”

Not for the first time in the series, cries of “Khawaja, Khawaja” rang around the stadium. “The fans have been great, they’ve been so supportive, I couldn’t ask for more,” he said. “I love it because you can tell they want Pakistan to win…but you can also tell they are very supportive of me.”

This has been an extraordinary comeback to Test cricket which has now brought three centuries in six innings along with a 97. If ever there was a sliding-doors moment, it was Travis Head’s positive Covid-19 result before the Sydney Test which created the spot for Khawaja’s return.

“It does feel right now like things are going pretty nicely, but I know the game can change pretty quickly,” he said. “I’m just enjoying the journey. I’m at a point in my career where it’s more about enjoyment than anything else. Nothing lasts forever; I understand that.”

This was another supremely crafted century. It began at a reasonably high tempo as he and David Warner played aggressively against the new ball. Khawaja was on 34 off 44 balls at the first drinks break and brought up his fifty from 69 deliveries, but then reined things in with the double loss of Warner and Marnus Labuschagne. The next fifty runs would take 124 deliveries as the ball softened and Babar Azam became increasingly defensive with his tactics.

When Warner was dismissed, Australia were 82 for 1 off 18 overs with the remaining 72 overs bringing 169 runs and just another 79 in a 36-over final session. However, Khawaja said they were determined not to give Pakistan anything as they tried to stop the scoreboard, having had batters fall to the leg-stump line in Rawalpindi.

“It was reversing pretty big in that middle session, and just got really hard to score. We just had to grind. Me and Smithy knew that.”

A batter would hope to fill their boots in conditions that have been presented across the first six days of this series – Labuschagne’s face after being run out for a duck showed the feeling of missing out – but after none of Australia’s top order could convert in the opening Test, it was important the first player with an opportunity to do so here took advantage.

Unbeaten on 127 at the close, Khawaja will be eying a huge score after the loss of Steven Smith late on the first day – his wait for a century goes on after Faheem Ashraf’s spectacular slip catch – meaning Pakistan do have an opening at a middle order that remains inexperienced in these conditions.

There were a few hints that this pitch may break up as the game progresses, and Khawaja expected that it would. Nauman Ali got one to spin sharply past Smith’s edge to bring a nod of approval, and Sajid Khan, during a largely disappointing display, made one grip which took a leading edge from Khawaja but landed safely.

As predicted before the game, it also appeared reverse swing would be more of a factor in this contest. The most compelling passage of the opening day was when Shaheen Shah Afridi, in a spell of 4-4-0-0, and Ashraf got the ball to move before tea. And neither of them bowled again until the second new ball was taken.

“It was reversing pretty big in that middle session, and just got really hard to score,” Khawaja said. “We just had to grind. Me and Smithy knew that. If we saw an opportunity to score we were looking for it, but we weren’t presented with many. They bowled well in the middle session, and then [in] that last session, the spinners went a little bit negative to the leg side.”

Australia will want to go very big in this first innings – Khawaja spoke of 500 – not least because it will help debutant legspinner Mitchell Swepson to operate without too much concern of runs conceded. Khawaja’s day had started with a heartfelt speech as he presented Swepson, who he captains for Queensland, with his baggy green.

He recalled being in the Australia dressing room on Swepson’s first tour in 2017 and thinking it would not be long before he played a Test only for it to eventually take five years. For Khawaja though, the opportunity to play in the country of his birth has been a much longer wait and for some time appeared may never happen. Instead, the homecoming is complete.