Fantasy 30 – Darius Garland is surging at the right time 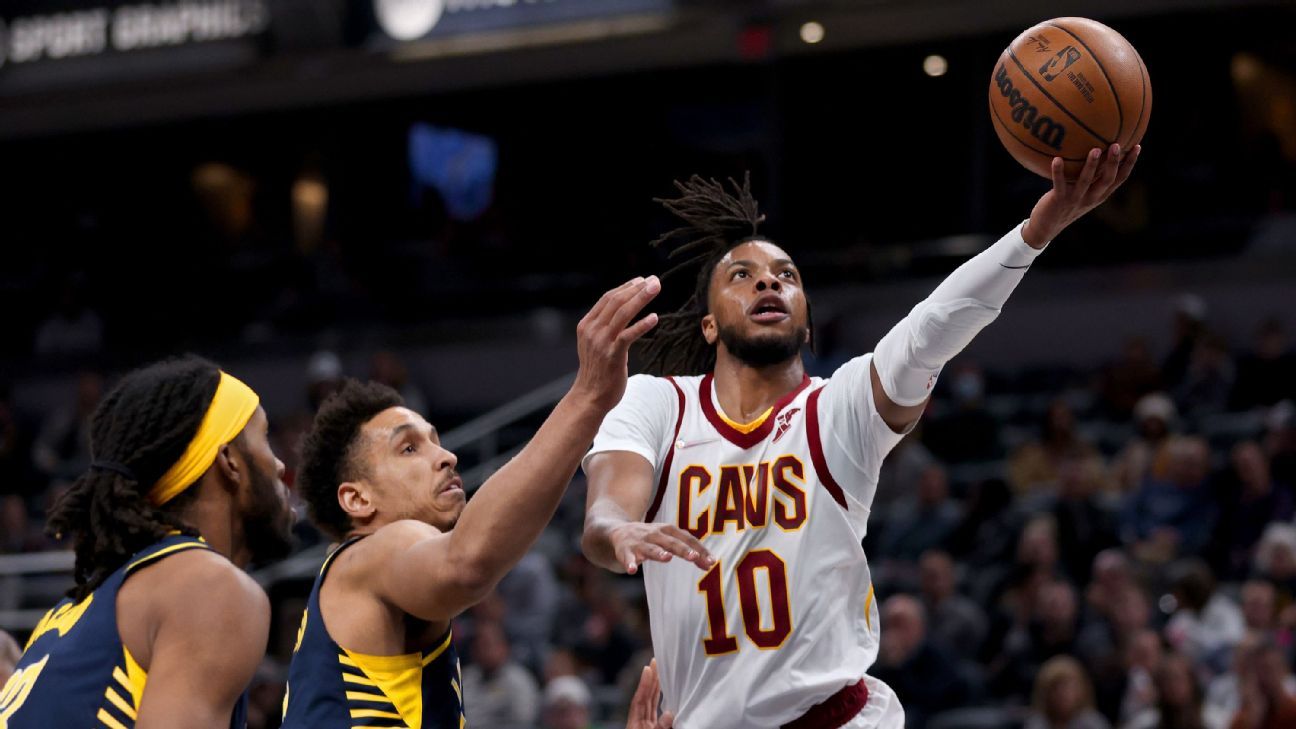 Who is trending up? Which rotations are changing? What’s the latest with the notable injuries around the NBA?

Here’s a look around the league at the most fantasy relevant news and notes for all 30 teams:

De’Andre Hunter has played well during the past four games, putting 19.0 PPG, 2.5 RPG, 1.0 APG and 1.0 SPG along the way. Hunter is available in 89% of ESPN leagues and should be rostered in deeper formats. Next week the Hawks play four games.

Robert Williams III comes in at No. 20 on ESPN’s Player Rater and continues to be an integral part of the Celtics’ success. The Time Lord has averaged 10 PPG, 10.3 RPG, 2.3 APG, 1.3 SPG and 3.0 BPG over the last six games and will likely be off draft boards by the third round next season.

Bruce Brown has averaged 14 PPG, 6.0 RPG, 3.1 APG, and 1.7 SPG in 31 minutes in the last 11 games. Brown is available in 90% of ESPN leagues, but his time in the fantasy spotlight will likely end when Ben Simmons makes his Nets debut. Brooklyn has only three games on its schedule in each of the next two weeks, which is another factor to weigh.

P.J. Washington has averaged 12.4 PPG, 6.1 RPG, 2.0 APG, 1.0 SPG and 1.0 BPG over his last 12 games. Washington is still available in 34.3% of ESPN leagues, and Gordon Hayward is not expected to return anytime soon. Washington doesn’t score a ton of points, but his ability to provide fantasy managers with complete stat lines makes him worth a look.

Coby White has thrived as a streamer because of the Bulls’ shorthanded backcourt. In fact, he’s averaged 15.5 PPG, 4.2 RPG and 4.0 APG in 31 minutes over his last 12 games. The former lottery pick is still available in 79% of ESPN leagues and ranks just inside the top-150 in category formats this year.

On Tuesday night, Darius Garland joined LeBron James as the only players in Cavaliers history to average 25 points and 10 assists in a five-game span. His play is peaking at the perfect time for fantasy managers looking to solidify their playoff positioning. For the season, Garland has put up 21.0 PPG, 8.2 APG, 2.6 3PG and 1.2 SPG while posting a very impressive 48.0 FG% and 91.0 FT%.

The only other players besides Nikola Jokic to average 35 points, 15 rebounds, and 10 assists in a three-game span are Wilt Chamberlain, Oscar Robertson and Elgin Baylor. It’s pretty good company for the veteran center who is making a pretty strong case for winning the Most Valuable Player Award this season.

Isaiah Stewart will be evaluated in one week after undergoing tests Tuesday that revealed a bone bruise in his right knee. This puts Marvin Bagley III (available in 56% of ESPN leagues) on the streaming radar. Over the last three games, he’s averaged 16.0 PPG, 8.0 RPG, 1.3 APG and 1.0 SPG in 28.5 minutes.

After the All-Star Break, only a few rookies have been as impressive as Jonathan Kuminga. He has averaged 18.3 PPG, 5.0 RPG and 2.0 APG in 28 MPG over the last three games. Kuminga is still available in 90.6% of ESPN leagues and continues to be a very good streamer while Draymond Green is away. This week, James Wiseman (knee) was cleared to play in two G-League games. He is expected to return by the end of March.

Kevin Porter Jr. may be avoided by some fantasy managers due to his 40% field goal percentage, and his penchant for turnovers. However, Porter has averaged 16 PPG, 4.2 RPG, 6.1 APG, and 1.1 SPG over his last 10 games. He is available in 34.3% of ESPN leagues.

Jalen Smith has been solid over the last 10 games, averaging 13.5 PPG and 8.3 RPG in 26.6 MPG. It’s also worth mentioning that during that period, Isaiah Jackson averaged 3.7 fouls per game, which negatively impacted his minutes. Smith is available in 91% of ESPN leagues. It may be wise to pick him up.

Look no further than Luke Kennard (available in 95.4% of ESPN leagues) if you want points and triples in a deeper format. In the last nine games, he has averaged 12.4 PPG and 3.4 3PG. Kawhi Leonard is said to have gone through a rigorous pregame workout on Tuesday, although it is not known if he will return this year.

Malik Monk, who is available in 83% of ESPN leagues, has played well over the last five games averaging 15.6 PPG, 5.0 RPG, 3.6 APG and 2.0 SPG in 35 MPG. In addition, he has made 14 triples in that span and with the Lakers having another four-game week next week, he should be added to lineups.

Recent games have seen the Grizzlies blow out their opponents, lowering the fantasy ceiling for some of their top players. The Grizzlies have now won 12 games by 20 points or more this season, trailing only the Suns (13) and Jazz (13) for the most such victories in the league. The Grizzlies have won 45 or more games for the first time since the 2014-2015 season.

Lowry has struggled since returning from a four-game absence resulting from personal reasons. However, on Wednesday night against the Suns, he recorded his 16th game this season with 10 or more assists, which is the most since Dwyane Wade reached that mark in the 2008-2009 campaign. The Miami Heat are 10-5 this season with at least 10 assists from Lowry.

On Wednesday night against the Hawks, Giannis Antetokounmpo had his 19th 40-point, 10-rebound game of his career. He’s the second player in the Bucks franchise with multiple such games. Kareem Abdul-Jabbar has 53 such games. The positive momentum for Antetokounmpo should continue against the struggling Warriors on Saturday.

On Wednesday night against the Thunder, D’Angelo Russell didn’t have a huge stat line. Despite this, he did not further damage his hamstring injury. Russell has hit two or more triples in 12 consecutive games. Also, with 27 assists in his last two games, he’s become more of a distributor.

Fantasy managers can rely on Herbert Jones to contribute across the board. Over his last five games, he has averaged 10.0 PPG, 3.6 RPG, 2.2 APG, 2.0 SPG and 1.0 BPG in 30 minutes. This makes Jones a good option for deeper formats.

During the past eight games, Immanuel Quickley has been excellent. The former first-rounder has averaged 16 PPG, 5.5 RPG, 3.4 APG, and 1.0 SPG. Could this cause Tom Thibodeau to use Quickley as the Knicks’ starting point guard instead of Alec Burks? That remains to be seen, but it’s possible. Quickley is available in 94.5% of ESPN leagues.

Aleksej Pokusevski has averaged 12 PPG, 7.0 RPG and 3.0 APG in 26.4 MPG during the past four games. With Pokusevski’s availability in 94% of ESPN leagues, it’s a good time to add him, especially in deeper formats. For the remainder of the season, he will likely continue to be utilized by the Thunder, who are shorthanded with Luguentz Dort (shoulder) now out for the season.

Cameron Payne has recorded three double-doubles in his last four games. In addition, he has recorded 54 assists in five games since returning from injury. Even still, Payne remains available in 76% of ESPN leagues. Chris Paul is out for the remainder of the fantasy season, so Payne will get as many minutes as possible.

Stop what you’re doing and go pick up Anfernee Simons. Damian Lillard is unlikely to return this season, so Simons remains the Trail Blazers’ top fantasy option. In the past 10 games, Simons has averaged 25.4 PPG, 2.6 RPG, and 5.1 APG in 34.3 minutes. His quad injury doesn’t appear to be serious, and he is available in 39% of ESPN leagues.

Considering Devin Vassell‘s ability to contribute across the board in every statistical category, it is surprising that he isn’t rostered in more leagues, especially deep ones. He’s available in 87% of ESPN leagues and over the last 14 games has averaged 12.6 PPG, 4.2 RPG, 3.0 APG, 1.4 SPG and 0.6 BPG in 29.6 MPG.

It must have been a relief for fantasy managers to hear that Fred VanVleet (21.5 PPG, 4.5 RPG, and 6.8 APG this season) would return to the lineup against the Spurs after a five-game absence. However, the news isn’t all good coming out of Toronto; Gary Trent Jr. remains in a slump. This month, Trent is shooting 28.6% from the field.

Over his last two games, Bojan Bogdanovic has averaged 28 points, 7.5 3-pointers and 3.5 assists. Currently, he’s available in 38.6% of ESPN leagues. Bogdanovic has 19 triples in his last three games, the most by any Jazz player over a three-game span, and the Jazz play four games in each of the next two weeks, making him a solid pickup in leagues where he’s available.

In the two games he has played since being traded from the Mavericks to the Wizards, Kristaps Porzingis has averaged 22.0 points, 3.0 rebounds, and 1.5 assists. Kyle Kuzma benefits from Porzingis’ presence since it provides an additional offensive threat that opponents must contend with whenever they share time on the court.