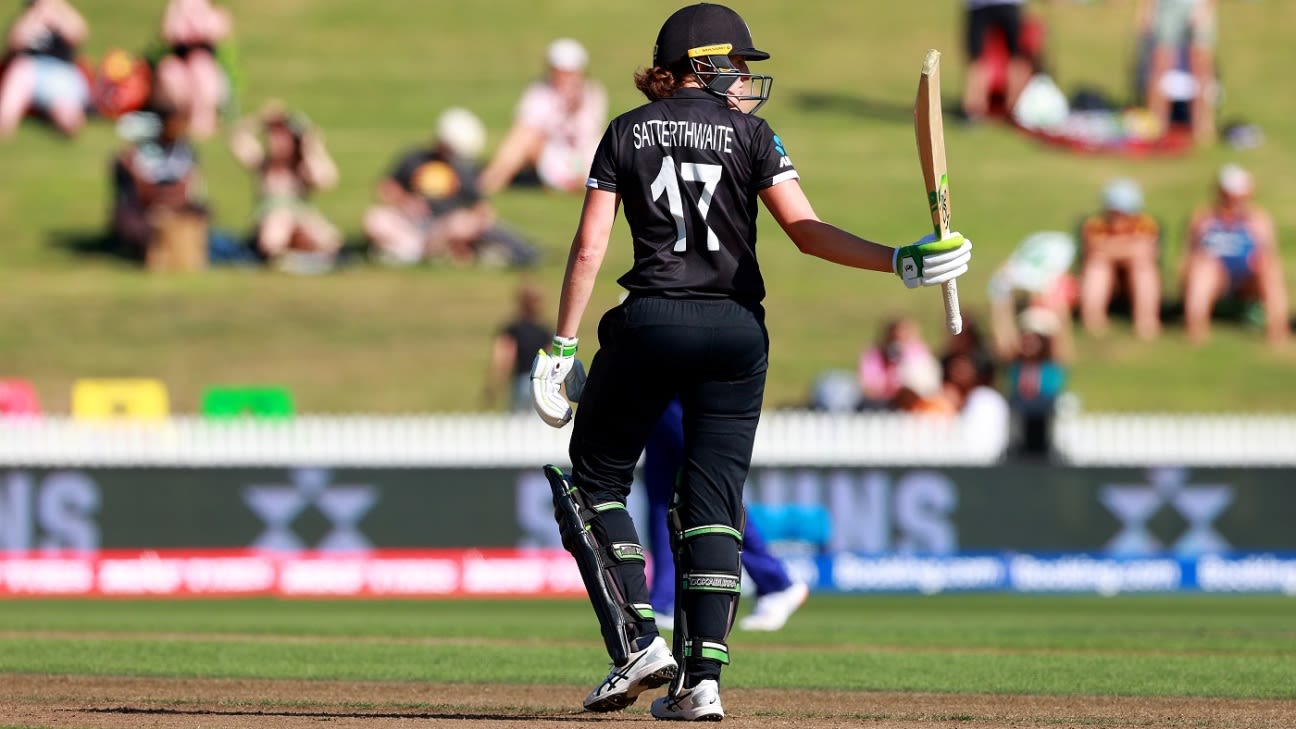 Having thumped India 4-1 in a bilateral ODI series last month, New Zealand seemed to have continued from where they left off, and were in an excellent position too, in batting-friendly conditions at Seddon Park. They were 211 for 4 at the 40-over mark but India wrested back control with Vastrakar’s four wickets, three of which came between overs 43 and 47.

Gayakwad, too, struck once in the last 10 to finish with 2 for 46. Only six fours were hit in the 20 overs between her and Vastrakar that cost a combined 80 runs. The remaining 30 overs, shared between four other bowlers, yielded 22 fours for New Zealand.

Just like in the previous game between Australia and England that yielded 608 runs, Thursday’s fresh surface encouraged stroke-making, After India opted to bowl, seemingly mindful of dew, New Zealand posted 51 for 1 in the powerplay, with just the loss of Suzie Bates.The former captain, who made 78 in the previous game, enjoyed the rub of the green early as a thick edge off Meghana Singh flew over the slips.

Three balls later, though, a drop-and-run call from Devine had non-striker Bates run out for the second time in three innings, thanks to a superb direct hit at the wicketkeeper’s end by Vastrakar from cover.

Devine then launched a minimal-risk offensive, punishing the slightest width on offer and erroneous lengths without breaking a sweat. She clubbed two back-to-back fours in Meghna’s second over. Two more, off consecutive deliveries, came in the next over, this time off Jhulan Goswami.

First-change, left-arm spinner Gayakwad then came agonisingly close to providing further inroads when she drew Kerr into the sweep when she was on 7, but Yastika Bhatia shelled what was a tough chance at deep square leg.

New Zealand suffered a big blow soon after the powerplay when Richa Ghosh gobbled up Devine’s edge in the 11th over to hand Vastrakar her maiden World Cup wicket. India, however, weren’t able to build sustained pressure. A run-a-ball 67-run third-wicket stand between Kerr and Satterthwaite helped there hosts take charge. Amelia then brought up her maiden World Cup fifty, and her fifth on the bounce against India.

Kerr, however, was trapped lbw soon after by Gayakwad. The onus then fell on Satterthwaite to take the hosts to a formidable total. And she delivered, with a fluent 75, at a ground she averages at over 120. Her nine fours, 31 singles, and four twos helped keep the run rate above four through the major part of her stay in the middle as India struggled to tighten the scoring areas against the left-hander.

Martin’s innovations helped keep New Zealand’s scoring rate up in the initial part of the final 10 overs. With Satterthwaite she added 49 for the fifth wicket as the home team set themselves up for a 250-plus score. Vastrakar oscillated between extraordinary and sloppy in the field, conceding a four through her legs and then dropping Martin on 27 after handing India an early advantage with Bates’ run out. She rounded out her outing with a flurry of wicket-taking yorkers.

India handed Bhatia a World Cup debut, bringing her in for the out-of-sorts opener Shafali Verma, who fell for a duck in India’s opening fixture against Pakistan on Sunday. The hosts, meanwhile, went in with the same XI they fielded in their victory against Bangladesh two days ago in Dunedin.

New Zealand are currently placed fifth on the points table with one win in two games while India, who won their tournament opener against Pakistan, are in the third position. For either to have a strong shout at a knockouts berth, a win in this game would go a long way in what is turning out to be a closely contested World Cup.