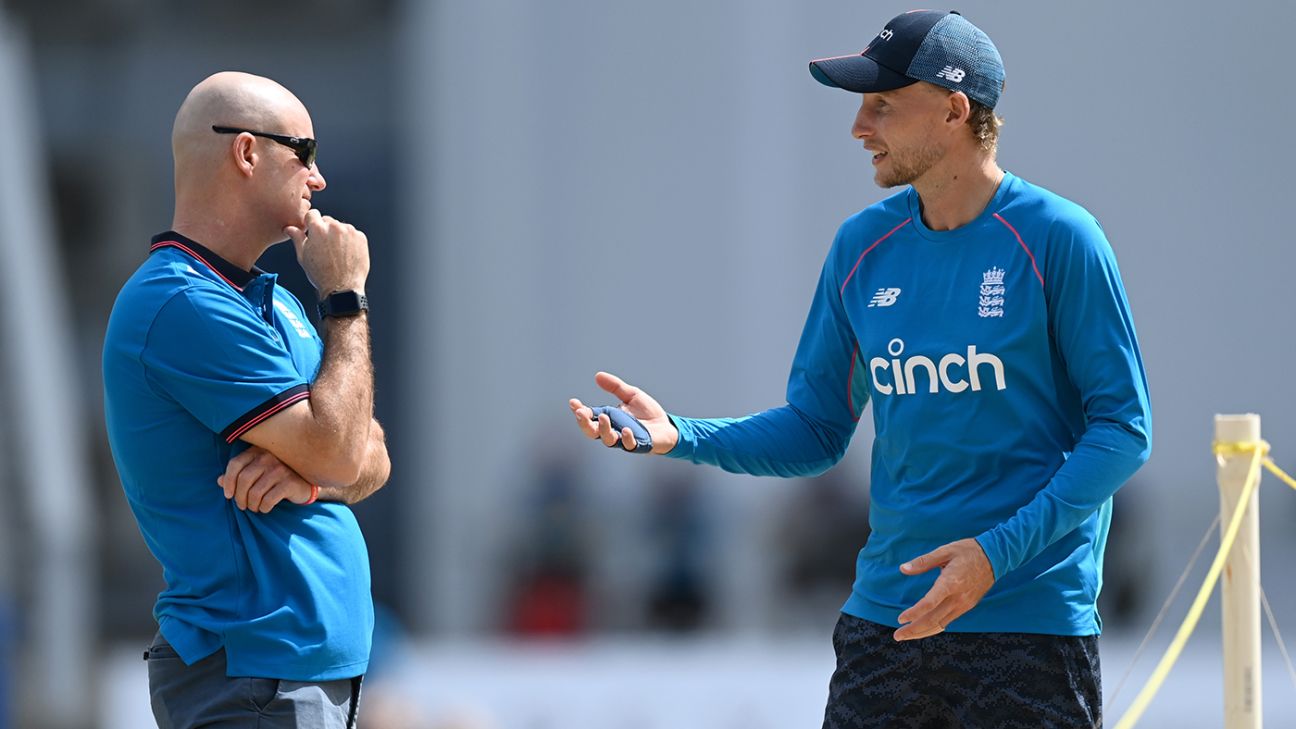 “We’re not going to panic,” Paul Collingwood said last week, midway through England’s one and only warm-up game ahead of a Test series that – fairly or otherwise – is destined to attract some snap judgements in the coming days. As preambles go for England’s much-vaunted “red-ball reset”, it wasn’t the most glowing of status reports.

For England – in case you drifted off during the Ashes and haven’t entirely tuned back in since – have committed to doing things differently on this trip. Or should that be, the same but differently? For it would appear, for this first Test in Antigua, that instead of leading the line with 1,177 Test-wickets worth of mega-experience in James Anderson and Stuart Broad, England are about to launch their new era with a cut-throat new-ball pairing of … [checks notes] Chris Woakes and Craig Overton? That is “quite surprising”, as Kemar Roach put it this week.
That potential attack is not quite as it was meant to be, of course. Ollie Robinson – England’s best newcomer of the 2021-22 season – would have been inked in for this contest, had he not succumbed to another iteration of the fitness issues that marred an otherwise combative Ashes campaign. But that in itself was a weird message to put across at the start of the squad’s new dawn: when you want to prove you mean business, it seems odd to bin the veterans whose professional standards have not dipped in more than a decade, in favour of a rookie who hasn’t yet convinced he’s got the stamina to match his undoubted talents with the ball.
At least there’s Mark Wood – or at least, there should be, but Wood himself has been under the weather, having missed the first innings in Coolidge while undergoing blood tests for a non-Covid-related illness. He seemed back to his 0-100 best on the final day, but the sapping demands of a Test match may require some honest assessment from the management if they hope for him to replicate his Ashes heroics, let alone touch the 96mph/154kph speeds that he served up during England’s most recent Test in the Caribbean, at St Lucia in 2019.
Either way, it’s all a touch sub-optimal for a side that has lost 10 of its last 14 Tests since February last year. And that’s before we even consider England’s bafflingly hopeless record in the Caribbean, a region where they have won one Test series in 10 in the past 50 years, in spite of the fact that West Indies’ golden era finally passed with the retirements of Curtly Ambrose and Courtney Walsh two decades ago.
“For me, England is our big series,” Roach added. “I’m always looking to put my best performance out against the Poms.” And few were bigger than his opening gambit on that last tour three years ago, when he routed England in a session, bowling them out for 77 with figures of 5 for 17. With Jayden Seales and Alzarri Joseph on hand for high-octane back-up, not to mention the cloud-snagging discipline of Jason Holder – whose most recent intervention against England was the small matter of four wickets in four balls to win January’s T20I series – there may yet be some uncomfortable echoes of Babylon’s Fire for Joe Root’s men to negotiate in the coming days.
Talking of Root, so much rests – as ever – on his shoulders. His stellar form in 2021 gave way to exhaustion and disillusionment as England’s dismal Ashes went down the tubes at the turn of the year, but his promotion to No. 3 signals a redoubled desire to lead from the front. Rather than hope against expectation that his openers can lay a platform, he’s committed to staunching the bleeding at the earliest opportunity – an admirable attitude, if perhaps an acknowledgement that if he can’t lift the team, then no one can.

Root can at least anticipate a similar level of commitment from his vice-captain, the somewhat battered talisman Ben Stokes, even if Stokes’ struggles in the Ashes were proof that it’s not quite as simple as flicking a switch and finding your best form when you’ve endured quite such high-profile setbacks as he did last year.

In theory, however, it ought to be England’s batting that gives their team the edge in this series – which is a curious conclusion to reach after they failed to reach 300 in any of their ten Ashes innings. There’s also Jonny Bairstow at No. 6, after all – the man who produced quite possibly the best innings on either side in the Ashes, a thrillingly combative century at Sydney that briefly kept a rampant Australia attack at arm’s length.

Pound for pound the experience of that trio ought to outmatch their opponents, on whom a huge amount rests on the proven obduracy of the captain, Kraigg Brathwaite, at the top of the order. There have been some promising signs elsewhere in their line-up, not least the impressive early outings of Nkrumah Bonner at No. 3, who made his maiden Test hundred when West Indies took on Sri Lanka in Antigua last year, and Kyle Mayers, whose debut double-century to beat Bangladesh in Chattogram in February 2021 was one of the performances of the decade.

Overall, however, West Indies are suffering from a malaise not dissimilar to that which has dogged England in the recent past. The preponderance of white-ball cricket at regional level has produced some outstanding ball-strikers in recent years, and some proud success on the global stage. But it has left too many batters too ill-equipped for the rigours of the red-ball game – a debate that was enthusiastically taken up by Mali Richards, son of Viv, during his commentary duties in England’s warm-up game.

As such, there’s no knowing what to expect in the coming days, except that West Indies will be gunning for the contest in a matter befitting the regional pride that their home record against England has long instilled. Whether or not you think that the dropping of Anderson and Broad is proof of England’s complacency or a necessary step in the “resetting” of those flatlined red-ball fortunes, you can rest assured how their absences will be framed in the Windies’ team-talks, and how there will be an extra spring in a few steps as they seek once more to rally round.

Alex Lees is set to become the 22nd man to open the batting for England since the retirement of Andrew Strauss a decade ago, following the dropping of both men who fronted up at the start of the Ashes, Rory Burns and Haseeb Hameed. Like Burns before him, Lees gets his chance after sterling service on the county circuit – although his two County Championship wins with Yorkshire in 2014 and 2015 are already ancient history, given that this call-up comes after a dip in form and a move north to Durham. He made a decent impression in England’s warm-up in Coolidge with an unruffled first-innings half-century, but the bar for the role is currently extremely low. Of those who have debuted as specialist openers since Strauss, no one averages more than Joe Denly (31.33), the man who debuted in the corresponding Test in the Caribbean three years ago.
There’s nothing quite like a West Indies fast bowler to set the pulses racing, and in Jayden Seales, they have a truly special prospect in the process of breaking through. After cutting his teeth at the Under-19 World Cup in 2020, Seales was picked to take on South Africa the following year without ever having played a regional first-class fixture. It mattered not, as he dismissed Keegan Petersen in his first over with a display of startling pace, then backed that up against Pakistan two Tests later, with a second-innings five-for and eight in the match, en route a thrilling one-wicket victory in Jamaica. At the age of 20, there’s the danger of expecting too much too soon. But with 16 wickets at 21.31 in four Tests to date, he certainly delivers the raw goods.

West Indies have recalled opener John Campbell after a year out of the side, and are set to pick left-arm spinner Veerasammy Permaul in a home Test for the first time since 2015. Shai Hope and Roston Chase were dropped following defeat in Sri Lanka, meaning a reshaped middle order – Shamarh Brooks offers another batting option, though the temptation may be to target England’s batting fragility with a five-man attack. Shannon Gabriel was not fit to be picked in the squad but has been training with West Indies in Antigua and could feature later in the series.

England have named their 12-man squad already, with Robinson’s absence notable following a back spasm in the warm-up. With Jack Leach a probable starter, Woakes already talked up as a new-ball shoo-in, and Wood sure to play if he is fully fit after undergoing blood tests last week, the final place looks like being a tussle between Overton and the uncapped Saqib Mahmood. Mahmood would be the bolder pick, but seeing as he was not in the warm-up frame until Wood’s illness, Overton is the likelier man to get his chance, following a brace of appearances against India last summer.

A straw-coloured, intermittently cracked surface awaits on Tuesday, although it’s anyone’s guess at this stage how it will play. West Indies and Sri Lanka played out two high-scoring draws in the ground’s most recent contests last year, although it didn’t seem that way when Sri Lanka crumbled to 169 all out in their first innings. The weather is set to be glorious, with intermittent Caribbean storms coming and going in a matter of minutes.

“Obviously they’re missing two experienced bowlers [in Anderson and Broad], but at the end of the day cricket is played on the park so we’re not taking it for granted.”
Kraigg Brathwaite is focused West Indies beating on the opposition players who have been picked to tour

“We know that historically it’s not an easy place for England to come and play – but that’s a great opportunity for the group. To come away from here winning would be a huge achievement.”
Joe Root on the challenge for a new-look England side