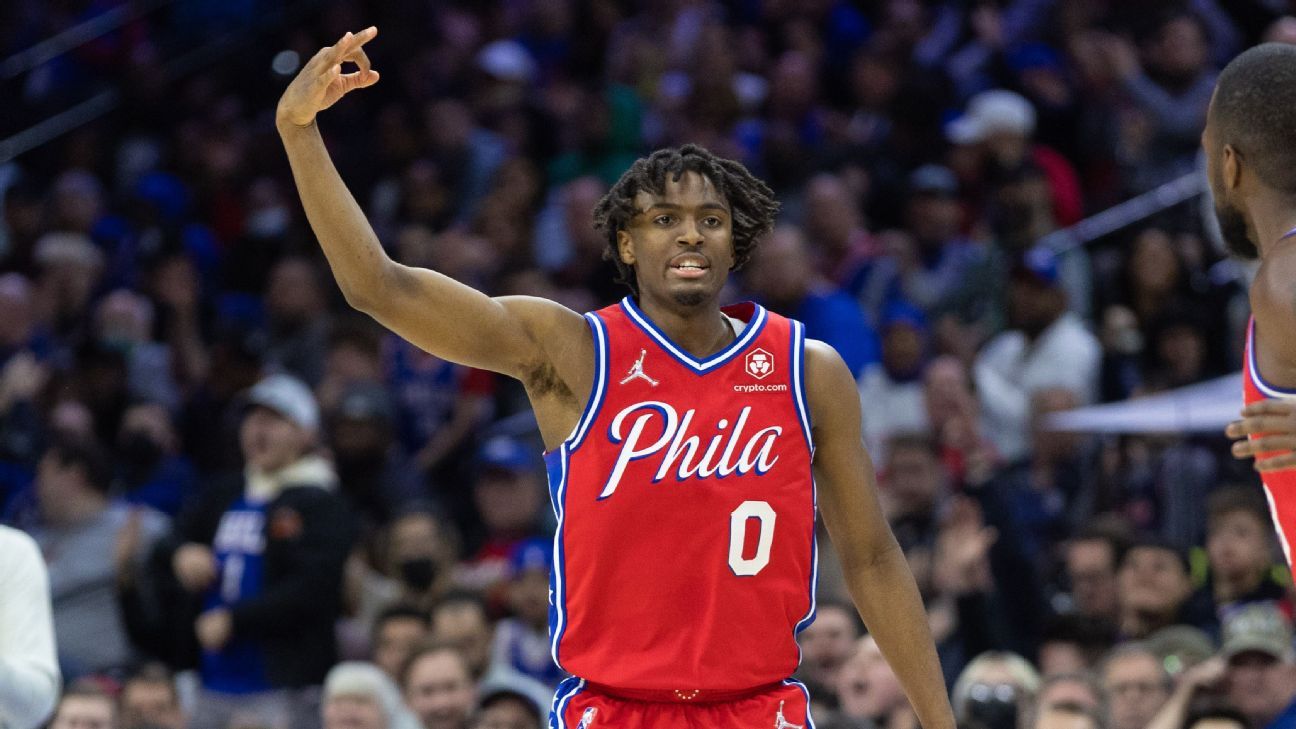 The ESPN fantasy and betting cheat sheet is your pregame destination for our best intel and data to help you make smart fantasy and wagering decisions. NBA game odds are provided by Caesars Sportsbook and fantasy advice is based on ESPN 10-team leagues.

Thrift Shop: With Anfernee Simons (quad) and Eric Bledsoe (Achilles) ruled out for tonight’s game in Minnesota, Ben McLemore (over 99% available) steps into a valuable role. These two teams combined for 256 points on Saturday (38 coming from Simons), a game in which McLemore played 30 minutes. If we’ve learned anything from watching McLemore for nearly a decade, it’s that he isn’t shy (over one shot per three minutes for his career) and that gives him streaming/DFS upside.

Microwave Malik: With Anthony Edwards listed as doubtful to play due to a knee ailment. Scoring guard Malik Beasley (64% available) has thrived as a complementary scorer for the Timberwolves during Edwards’ absence, averaging 17 PPG and a five made 3-pointers per game during his last three games. Given that 28 of his 32 shots from the floor have been beyond the arc during this run, Beasley is also a nice target for shooting props.

Donte’s Inferno?: As a team, the Kings have been a much more efficient team at home than on the road this season and they host a Knicks team that is on the second night of a back-to-back. Donte DiVincenzo (62% available) is averaging 1.8 3’s and 1.7 steals in nine games with Sacramento, giving him appeal in the right situation for roto league streamers.

Frontcourt Finds: With the Trail Blazers running out a skeleton crew this evening, two names that stand out as particularly nice values are power forwards Drew Eubanks and Trendon Watford (both 98% available). Eubanks has a real shot at a double-double given his recent work on the glass, while Watford has compiled 21 boards and 10 dimes across his last two appearances.

Gettable Guards: Chicago won’t have Lonzo Ball or Alex Caruso for tonight’s marquee matchup with the 76ers in Philadelphia. Rookie Ayo Dosunmu (76% available) can provide helpful assist and defensive production. For Miami, meanwhile, the continued absence of Kyle Lowry means Gabe Vincent (96% available) should start and serve as a shooting specialist for fantasy managers. Vincent, after all, has made multiple 3-pointers in four of his last five outings and has averaged three per game during this stretch.

Notable: Following a stretch in which they covered three straight and six of seven, the Bulls have failed to cover four-in-a-row.

Best bet: 76ers -6.5. The 76ers have won all three of their matchups with the Bulls this season by an average of 8.3 PPG. Joel Embiid has been a Prob-a-lem for the Bulls… he’s just too big and skilled for them to defend. In their last two games, Embiid has 76 total points on 60 percent shooting from the field, along with 26 rebounds and 6 assists. Prob-a-lem! Now, add in his synergy with James Harden, and the fact that the Bulls have been struggling of late to the tune of four straight losses, and the 76ers should control this game.— André Snellings

Breaking down the rest of the slate

Notable: Don’t look now, but the Pistons are 5-2 outright over their past seven and are unbeaten against the spread over that stretch.

Fantasy Streamer: Marvin Bagley III (available in 58.5% of leagues) returned from ankle injury with an 18 point, 8 rebound and 2 assist performance. He averaged 16.0 PPG, 5.3 RPG and 1.0 SPG in only 22.3 MPG in his past three games with his new Pistons squad. — Snellings

Best bet: Isaiah Stewart over 8.5 points. Over the last 10 games, Stewart averaged 10.2 points in 26.7 minutes per game. With 114.6 points allowed per 100 possessions, the Hawks rank 27th in defensive efficiency. The Hawks also allow a high field goal percentage on shots within four feet of the basket. Stewart has attempted 68% of his shots from this range this season. — Moody

Best bet: Pistons +7.5. The Hawks are one of the hotter teams in the NBA right now, with five wins in their last seven games, including multiple wins over playoff-level teams. The thing is, you could also say the same about the the Pistons, who’ve won 5-of-7 with wins over the Celtics, Cavaliers and Raptors. The Hawks are the better team, but the Pistons are playing well, and also tend to play in close games. Six of their last seven games finishing within a 6-point scoring margin in either direction. — Snellings

Notable: The Heat have covered each of their past four games and under tickets have cashed in three of them.

Fantasy Streamer: Gabe Vincent. Kyle Lowry is out for the Heat for the foreseeable future, and it is unclear when he will return. Vincent is still available in 96.5% of ESPN leagues. In the last four games, he has averaged 15.5 points and 3.5 assists in 31.7 minutes. — Moody

Best Bet: Total under 225.5 points. The Rockets have struggled to score points this season. Houston is ranked 27th in points scored per 100 possessions with 107.6. Defensively, the Rockets allow a high effective field goal percentage to opponents along with a lot of points. The Heat, meanwhile, rank 7th with 113.7 points scored per 100 possessions. — Moody

Notable: Over tickets have come through in five straight Minnesota games. In fact, since mid-January, overs are 19-4 when the Timberwolves are involved.

Best bet: Under 235.5 points. The Timberwolves have been participating in high-scoring games both at home and on the road as of late, including their matchup with the Blazers last weekend that totaled 256 points. The Wolves have played lower scoring games in Minnesota and 235.5 is a big number. Plus, the Blazers are missing three impact players, and are already depleted by injuries and trades. This game shapes up to be a blowout, one in which the Blazers could struggle to put points on the board. — Snellings

Fantasy streamer: Keon Johnson. Johnson (99.9% available) is once again on the streaming radar with Simons, Bledsoe and Winslow out. He will have every chance to post a fantasy-friendly stat line. On Saturday night, Johnson scored 15 points, collected two rebounds, five assists, and a steal in 29 minutes against the Timberwolves. — Moody

Key players ruled out: none

Notable: The Mavericks have covered the past three meetings with the Jazz, this coming on the heels of covering just two of the previous nine showdowns.

Notable: Four straight Laker-Spurs games have gone over the total, including the Dec. meeting that went 22 points over the projection.

Best bet: LeBron James over 45.5 total points + assists + rebounds. Kobe Bryant (60) is the only player with more 50 point games than James (56) at age 37 or older. After his historic performance against the Warriors on Saturday, James’ positive momentum should continue against the Spurs — provided that he plays in this one. San Antonio ranks 21st in points allowed per 100 possessions and allows opponents to grab a lot of offensive rebounds. — Moody

Notable: The Warriors are just 1-9 ATS over their past 10, but at least there are points being scored in those games… overs are 8-2.

Fantasy Streamer: Jordan Poole. Curry, Thompson, Wiggins and Payton II have already been ruled out, which greatly benefits Poole as a streamer and in DFS lineups. He’s still available in 33% of ESPN and has averaged 23 points, five assists and 4.3 rebounds per 40 minutes this season. This matchup between the Warriors and Nuggets has the potential to be high-scoring. — Snellings

Notable: The Knicks are seeking consecutive covers for the first time since January 23-24