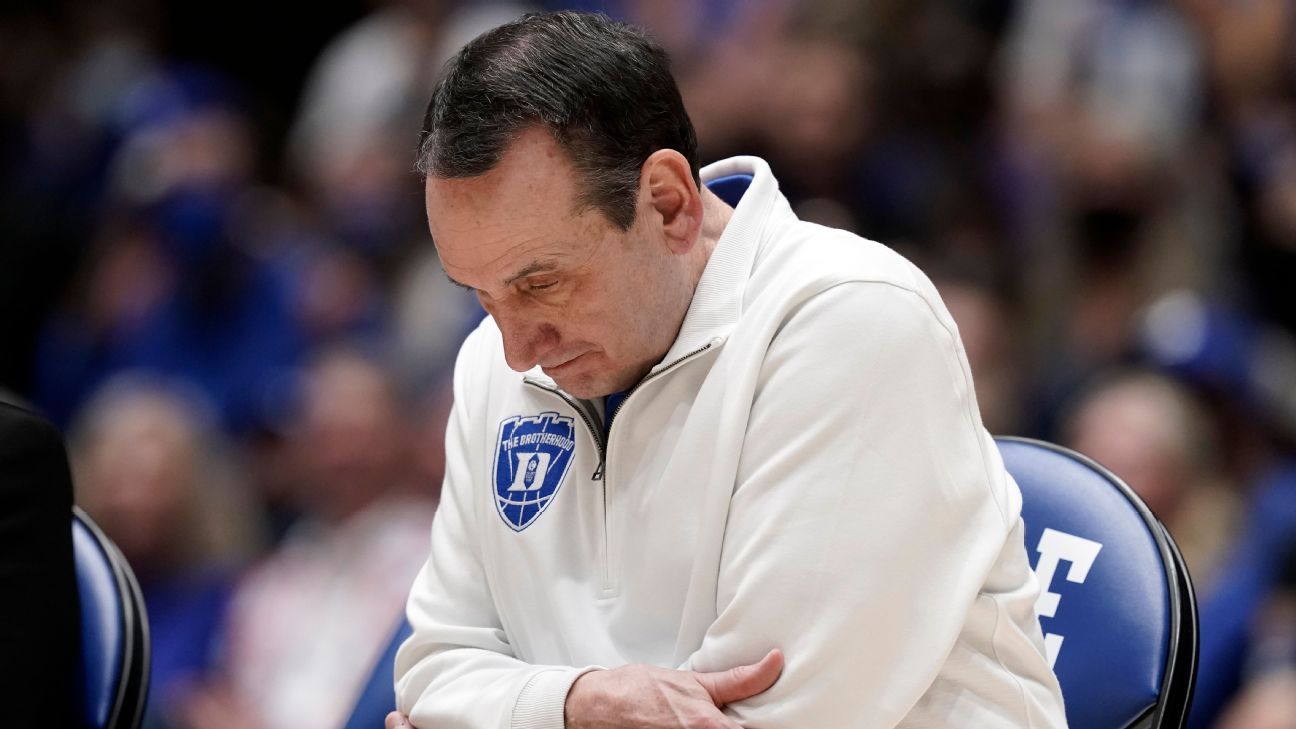 DURHAM, N.C. — Mike Krzyzewski didn’t want it to end like this, but after Duke‘s 94-81 loss to North Carolina in his final home game at Cameron Indoor Stadium, he seemed to be glad it was done.

“It’s hard for me to believe this is over,” Krzyzewski told the crowd who’d come — some spending $10,000 or more for a ticket — to say goodbye. “So I’m just going to say the regular season’s over.”

This season has been long, and while Saturday wasn’t the official finish line, it was, perhaps, the end of his farewell tour, and for that, he was thankful.

Krzyzewski announced his retirement last June, a decision he said he made so he could have one last season to focus solely on coaching — no recruiting, no worries about the future, just one final run for a championship. But that plan was never going to work. The basketball world wasn’t simply going to watch Krzyzewski, the winningest coach ever, ride off into the sunset. His career required a requiem.

And so at each stop along this season’s schedule, the lead story was Krzyzewski. At some stops, there were honors. At others, emotional reunions. At North Carolina, just a month ago, there was a fitting absence of fanfare, only rival fans casting their rage onto the enemy one final time. Then, as an afterthought, they played basketball games, and in all but four of them, Duke won.

The Blue Devils had circled this one months ago. It was a rivalry game, of course, but they’d already thrashed North Carolina in Chapel Hill, a statement win in a season in which Duke has also beaten Gonzaga and Kentucky. The game didn’t matter much in the standings either. The Blue Devils, by virtue of a seven-game winning streak, had already clinched the ACC regular-season title. No, Saturday was about this team penning its own chapter in Krzyzewski’s legacy, sending its coach off the right way. Only, that didn’t happen. 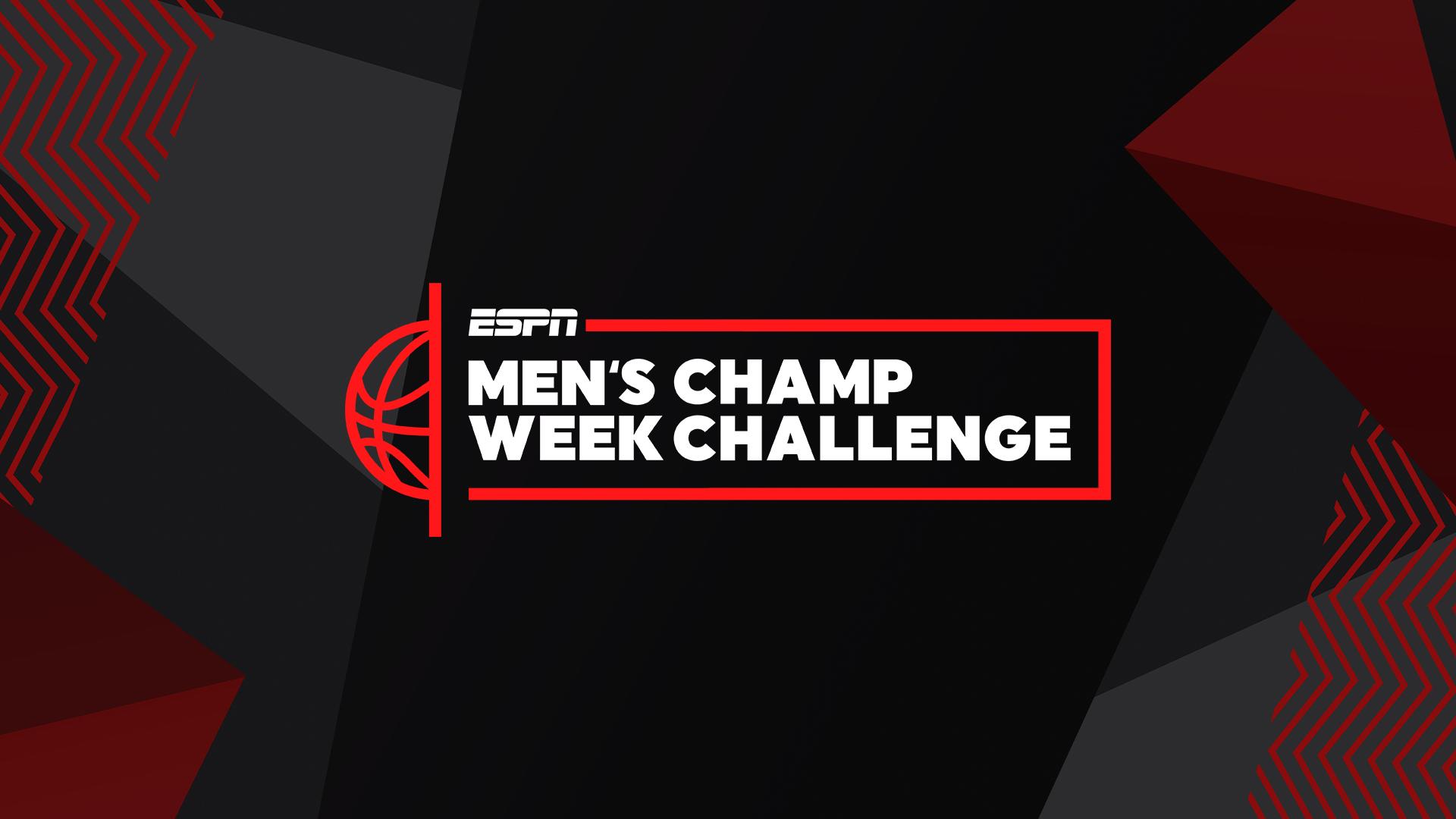 Play for FREE and compete for $10,000 by picking the winners of 20 men’s conference tournaments. Make Your Picks

“I’d be lying if I said I didn’t know this date was coming,” star forward Paolo Banchero said. “Everybody knew. It’s something more than a regular game. It was important. And it sucks we lost.”

Funny thing is, Krzyzewski didn’t seem to mind all that much.

“I’m glad this is over,” Krzyzewski said. “Let’s just coach and see what happens in the tournaments. It’s been a surreal few days.”

In his final home Duke game, Mike Krzyzewski walks out to a huge ovation from former players he coached as well as the fans.

The whole ride has been surreal — part documentary, part eulogy, part circus and, somewhere in the mix, basketball. After Saturday’s loss, before the postgame ceremonies began, Krzyzewski apologized to the fans in attendance, and in unison, they refused to accept it. They weren’t here to see Duke win — even in a game against hated North Carolina. They were here for Krzyzewski, results be damned.

This is uncharted territory at a place like Duke, for a coach like Krzyzewski. Winning is always job No. 1. And perhaps that’s what has felt so off-kilter this season. There was winning, but only in the context of what it meant for the larger narrative. And Saturday was the final curtain, the climax of the story Krzyzewski set in motion back in June.

Banchero, like his coach, wanted to find some meaning in the loss. It was a lesson. It was motivation. It was catharsis.

What it really was, however, was the ending Duke had been waiting for — for better or worse.

Complete your bracket by selecting the winner for each game of the 2022 men’s NCAA tournament. Play Tournament Challenge

Endings, of course, are followed by new beginnings, and that seemed to be what mattered most for Krzyzewski on Saturday. For his team, too.

The story of his retirement will continue into the ACC and NCAA tournaments, but it will no longer be center stage. The camera will pan away from the coach, at least for a while, and focus on the team — a team Krzyzewski truly believes is good enough to win it all.

Banchero noted that the worst moments of Duke’s season have all come here, at Cameron, in front of the home fans, who’ve turned out each game to pay respects in a countdown to Saturday.

Mike Krzyzewski sits down with Rece Davis to discuss his final home game at Duke.

There are no more home games, and that’s fine.

“On the road and everywhere else we’ve been hungry, and we won’t be playing the NCAA tournament here,” Banchero said. “We’re looking forward to going on the road and making up for it.”

It’s not so much an opportunity for atonement, however, as it is a chance to turn the page, to look at what lies ahead rather than the 42 years of Krzyzewski’s career that preceded this final run.

Banchero is still one of the most dynamic big men in the country. Wendell Moore Jr. remains the veteran commanding the offense, the beating heart of the roster. Mark Williams, AJ Griffin, Jeremy Roach, Trevor Keels — they all seem to fit their roles exactly as they should, as if this was the real story Krzyzewski wanted to script for this season. And now, after a year of games that were about something more than just the final score, it’s the team that’s center stage.

“I wanted this year to be a really good coaching job, not a retirement year, and to stay hungry,” he said. “I think I have, and I will. Until this is done.”