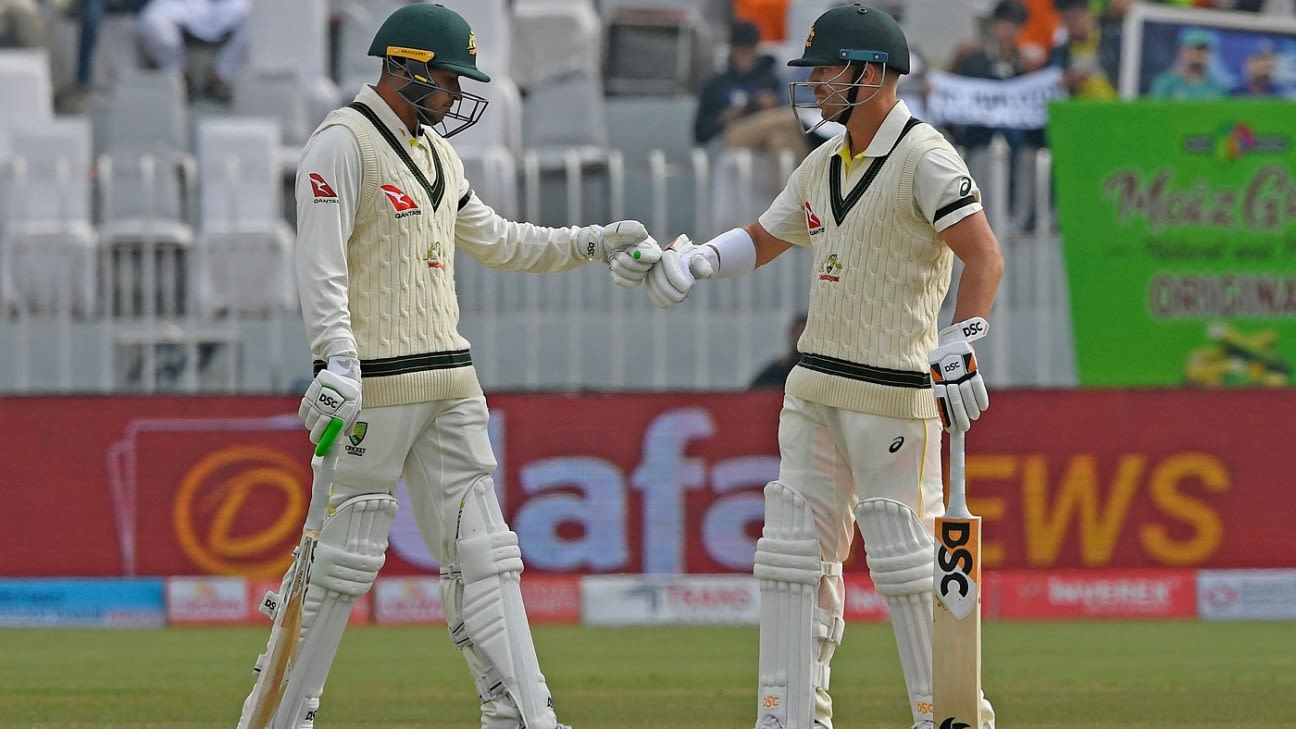 Openers Usman Khawaja and David Warner countered a pace barrage with aggressive batting in an absorbing opening session of day three, as Australia impressively launched their first innings in the series-opener against Pakistan.

In reply to Pakistan’s massive first innings of 476 for 4, Australia reached lunch on 138 for 0 in their long road back into the first Test in Rawalpindi. In his country of birth, remade opener Khawaja made a brisk 70 from 104 balls and Warner 60 from 97 balls as the pair weathered challenging bowling from energetic quicks Naseem Shah and Shaheen Shah Afridi.

But they maintained a positive approach scoring at around four runs an over throughout the morning session marked by a domination of Pakistan’s spinners.

The action-packed contest contrasted with a dour opening two days when an unwavering Pakistan blunted tight bowling from Australia and batted for 162 overs highlighted by a 208-run second-wicket between centurions Azhar Ali (185) and Imam-ul-Haq (157), who hit his maiden Test ton.

Play started 10 minutes early after a rather farcical end to day two, where Australia faced just one over of spin from Sajid Khan due to deteriorating light.

Khawaja, who marked his Test return during the SCG Ashes Test with twin centuries, received good fortune when dropped on 22 from a luckless Shaheen, who set it up perfectly with a full pitched delivery only for Fawad Alam to shell a straightforward chance at gully.

After a sedate opening two days, a fuse was lit with Pakistan’s aggressive pace bowling creating opportunities but Khawaja countered with attractive drives and pull shots to bring up the half-century stand in the 13th over.

After Australia’s quicks rarely threatened, with skipper Pat Cummins taking the sole wicket, Naseem and Shaheen conjured pace, bounce and movement in a menacing start. Helped by cool and cloudy conditions, Shaheen found away swing and bowled a gem of an opening over to twice beat Warner with full-pitched deliveries outside off stump. The left-handed veteran nervously edged a boundary through gully as Shaheen dictated early.

The 21-year-old was in a groove and turned his attention to Khawaja, who dangerously left a good length delivery that struck him on the pads but was given not out due to height.

A rattled Warner, who averages 108 from eight Tests against Pakistan, struggled to find his footwork and was tangled by probing short-pitched bowling from the quicks.

It prompted skipper Babar Azam to deploy a short leg, but Australia’s openers started to settle. After a tough initiation, where he scored just 11 off 45 balls, Warner cracked Naseem for consecutive boundaries through the off side to get him rolling.

The fired-up quick went around the wicket and struck Warner on the back of the shoulder with a nasty bouncer. Naseem then went down the pitch to give him an earful only for Warner to diffuse the situation with a laugh.

It was a tense battle between the firebrands, but Warner remained intact and then put the foot down. He and Khawaja had little trouble against spin although Sajid, who came on in the 10th over, mixed up his bowling cleverly. But left-arm spinner Nauman Ali, who waited until late in the session to get a chance, struggled after being greeted to the crease by a slog sweep boundary from Warner as Australia’s openers made a statement.

Much like the previous days, the crowd was sparse through the morning session but is expected to build although rain is forecast in the afternoon.

Tristan Lavalette is a journalist based in Perth