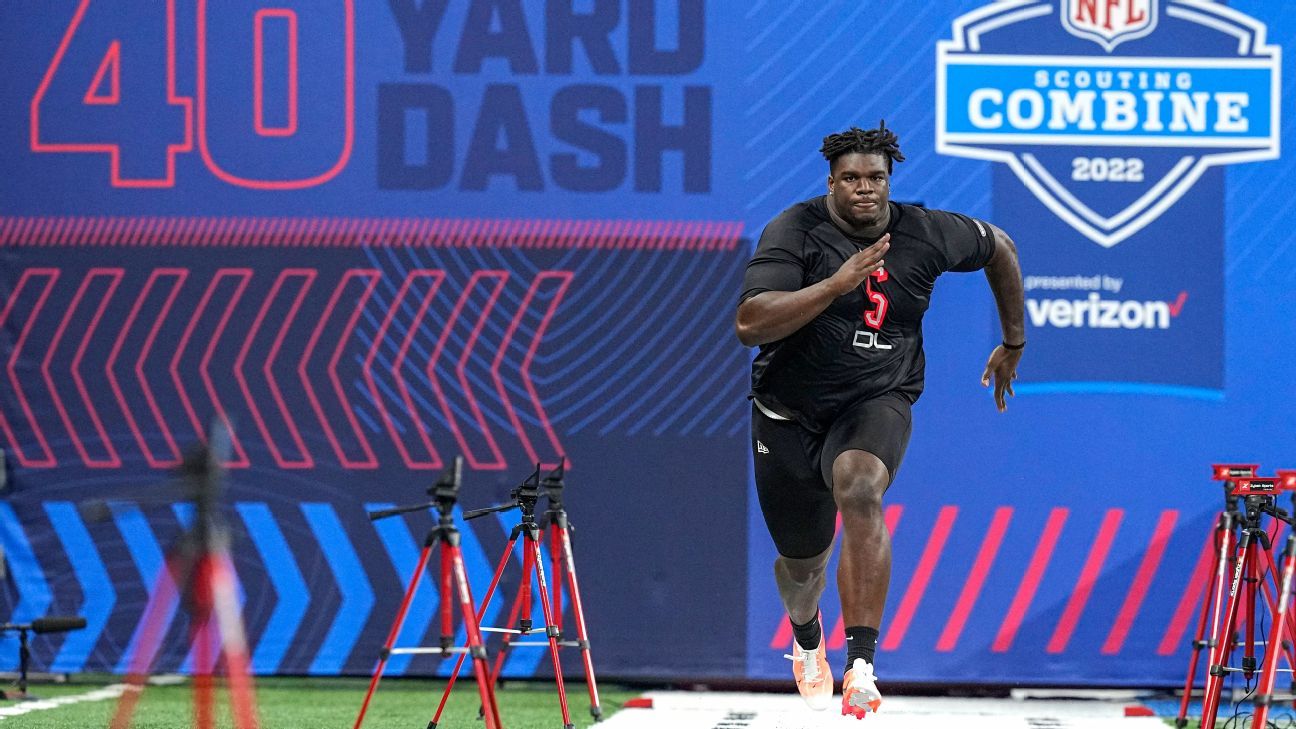 INDIANAPOLIS — Georgia defensive tackle Jordan Davis — all 341 pounds of him — finished the 40-yard dash in 4.78 seconds at the NFL scouting combine Saturday night.

Let that sink in.

It was a sight worthy of the ovation it received from the several thousand fans inside Lucas Oil Stadium to watch the defensive linemen and linebackers go through their on-field workouts.

Davis, who is 6-foot-6⅜, might not have to actually run a 40-yard sprint very often in an NFL game, but he ran it like few others of his size ever have at the combine.

The 4.78 clocking was the fastest for any player over 330 pounds at the combine since 2006 and is believed to be one of the fastest times for a player that size in the event’s history.

Davis later had a standing broad jump of 10 feet, 3 inches, believed to be the record for a player over 300 pounds.

Former Nebraska defensive tackle Khalil Davis ran a 4.75 40 at the 2020 scouting combine, which was the fastest 40 by a defensive lineman who weighed in at more than 300 pounds since 2006.

Poe also did 44 repetitions of 225 pounds in the bench press and had a 34-inch vertical jump — each a staggering number for a player of his size.

Jordan Davis, a potential first-round pick in next month’s NFL draft, was a first-team All-SEC selection this past season and started at least eight games for the Bulldogs in three of his four seasons. He also had one rushing touchdown this past season.

Hutchinson is currently the No. 1 ranked player in the draft by both Todd McShay and Mel Kiper Jr.

Ole Miss‘ Sam Williams, who was selected by some linemen this week at the combine as the most difficult pass rusher they had faced this season, ran 4.46 and Virginia defensive end Amare Barno, at 246 pounds, ran a wide-receiver worthy 4.36.

And when the linebackers took the field to close out the workouts Saturday night it was Montana State linebacker Troy Andersen who ran the first, and fastest it turned out, 40 with a 4.41 clocking at 243 pounds.

Andersen piled up the tackles at the FCS level, but caught teams attention with his explosiveness against the nation’s best during his week at the Senior Bowl in January. Andersen likely left Indy with a continued climb up some draft boards.

Only one of the top two inside linebackers in both McShay’s and Kiper Jr.’s rankings – Utah‘s Devin Lloyd – worked out Saturday. Lloyd showed well in position drills to go with a 4.71 showing in the 40-yard dash. Georgia’s Nakobe Dean did not participate in the workout.

Alabama‘s Christian Harris, who was a semifinalist for the Butkus Award this past season, ran a 4.44 and was the only other linebacker other than Andersen to run better than a 4.5.