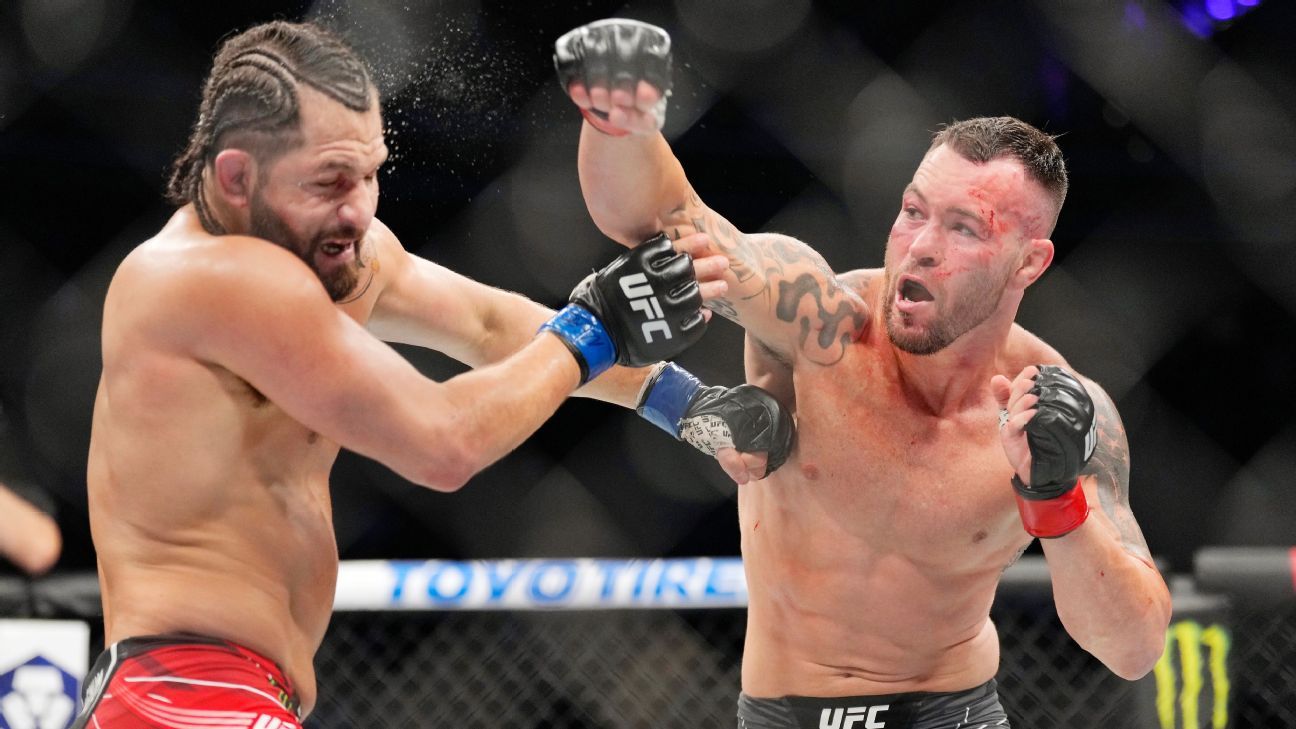 LAS VEGAS — As much as some would like to see it, Colby Covington isn’t going anywhere any time soon.

The foul-mouthed, polarizing standout picked up arguably the biggest win of his career against former friend Jorge Masvidal via unanimous decision (49-46, 50-44, 50-45) in the main event of UFC 272 on Saturday night here at T-Mobile Arena. The crass Covington used his dominant wrestling, pressure and crafty striking to wear out Masvidal, who was able to gut it out until the end.

Afterward, Covington called out another one of his former training partners, Dustin Poirier, whom he called “Louisiana swamp trash.”

Masvidal had moments in the second round and dropped Covington in the fourth. But other than that, Covington was in control for the majority of the fight. After the bell, Covington took out his mouthpiece, stuck out his tongue at Masvidal and blew him kisses.

“I should have had more moments like that, but I was off today,” Masvidal said. “I didn’t have it.”

The fight was billed as one of the biggest grudge matches in UFC history and a rare non-title pay-per-view main event that didn’t include either Conor McGregor or Nate Diaz. The crowd was behind Masvidal, cheering for a comeback. But there were some “Colby!” chants, as well.

Covington and Masvidal are former best friends, roommates and teammates. Masvidal acted as a mentor to Covington when Covington arrived at American Top Team in 2011 after an illustrious career wrestling at Oregon State University. Covington helped Masvidal with his wrestling skills, while Masvidal helped teach Covington how to strike.

The two men cannot stand each other now. Covington believes Masvidal got jealous of his success and stabbed him in the back. Masvidal says Covington is phony and stiffed Masvidal’s coach, Paulino Hernandez, on pay.

This fight really wasn’t about rankings or titles. It was about settling a score. But Covington and Masvidal are elite athletes, as well. Both are multiple-time UFC welterweight title challengers. Coming in, ESPN had Covington ranked No. 4 in the world at welterweight and Masvidal at No. 10.

Covington (17-3) was coming off a close, unanimous decision loss to Usman, ESPN’s current pound-for-pound king, at UFC 268 last November. The California native, who lives and trains in Florida, has won nine of his past 11 fights, with both losses coming to Usman. Covington, 34, owns dominant wins over two other former teammates: Tyron Woodley and Robbie Lawler.

Masvidal (35-16), one of the UFC’s biggest stars, lost to Usman in his previous two bouts coming in, both title fights. Most recently, Usman knocked Masvidal out at UFC 261 in April 2021. Masvidal, a Miami native, rose to superstardom in with spectacular finishes over Darren Till, Ben Askren and Nate Diaz in 2019. In the latter bout, Masvidal claimed the mythical Baddest Motherf—er title. Masvidal, 37, has been a pro fighter since 2003 and started his career fighting on the streets and in backyards.