Few films have dominated the digital conversation quite like “Don’t Look Up.”

The Netflix original, created by far-left auteur Adam McKay, satirizes how the world would react if a planet-killing comet was heading straight to earth.

It’s an obvious metaphor for Climate Change, and the globe’s inability to address what some see as an existential threat hiding in plain sight. Critics and audiences are deeply divided on the film, and while many liberals loathed the film it earned a few kind words from the Right. Andrew Klavan suggested the early scenes scored a satirical bullseye before the clunky talking points took charge.

The film and the media reaction to it offer some key cultural lessons.

The era of the movie star ended some time ago. Even the biggest Hollywood talents (think Will Smith, Tom Hanks and Angelina Jolie) can no longer guarantee box office glory. See “Concussion,” “A Hologram for the King” and “By the Sea,” respectively.

Now, beloved franchises rule the box office, followed closely by remakes, reboots and prequels. Any Spider-Man film will crush the $100 million mark in a matter of days, no matter who lurks behind the red mask.

That’s no attack on stars like Tom Holland or Andrew Garfield. It’s just the truth.

Something different is happening on streaming services.

If you’re casually reading Netflix’s “Just Added” section and see a new film starring Leonardo Di Caprio, Meryl Streep, Jennifer Lawrence and Tyler Perry, would you keep looking for something to watch? Of course not.

It’s why Adam Sandler proved prescient when he signed that Netflix deal in 2014 to make movies exclusively for the platform, and then extended it two years ago.

This site previously noted that “Don’t Look Up” generated some awful, terrible, no good reviews. That’s typically the kiss of death for a movie’s Oscar campaign. A film can survive some mediocre notices and go on to earn major awards.

That isn’t the case if enough critics excoriate a particular film.

Yet “Don’t Look Up” already has multiple award nominations, and that tally will likely expand once the Oscar voters have their say. McKay’s pedigree as Hollywood’s go-to propagandist, along with the Climate Change messaging, are enough to snag awards season love.

This critic gets a wave of emails every day from movie publicists.

They want me to review their latest projects, interview the folks who star in them or just announce the film’s release date. That produces copy that lets others know the film exists in the first place. The old saw, “there’s no such thing as bad publicity” still holds up. And it’s perfectly understandable given how much cultural noises exists in the movie landscape.

“Don’t Look Up” doesn’t have a problem getting the press’ attention. It’s arguably the most covered film of the past few months, generating scores of articles examining every element of the film. Here’s a tiny sample from the Google Alerts notice this reporter set up to track the film’s media coverage. 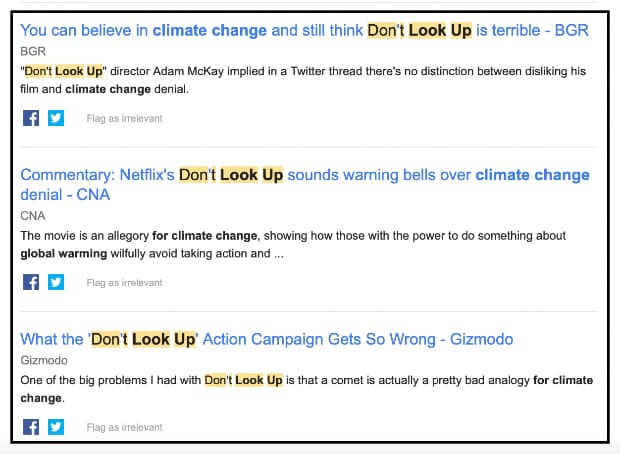 Each day brings a fresh wave of articles tied to the film.

A personal favorite? A story breaking down why a stingy general in the film charges the movie’s heroes for White House snacks.

Why obsess over a single film?

The press wants to push its Climate Change message to the masses. To do so, it finds every possible angle to explore along the way.

Even Liberal Critics Have Their Breaking Points

Michael Moore, a far-Left auteur, routinely receives critical raves. Conservative pundit turned filmmaker Dinesh D’Souza, on the other hand, finds himself on plenty of “Worst of the Year” movie lists.

The film critic community is overwhelmingly liberal, and it shows in their critiques. A pro-abortion movie wlll be greeted differently than a pro-life drama, for example.

And yet liberal critics know a lousy movie when they see one. Many mainstream progressive critics shredded “Don’t Look Up” upon its release. Some did so in aggressive fashion while admitting they agreed with the need to address Climate Change … now.

Imagine starring in a movie that tackles Climate Change denial despite having a massive carbon footprint. You’d think a performer might either reject the role for that reason or come up with clever ways to explain the startling disconnect.

The Oscar winner is one of Hollywood’s most outspoke voices on Climate Change. He’s produced documentaries on the subject and turned his Oscar acceptance speech for “The Revenant” into a screed about the environment.

And yet his personal life hardly matches that rhetoric. He’s an eco-hypocrite of the first order.

Did that coax him to turn down “Don’t Look Up?” Of course not. Nor have any journalists asked him any tough but fair questions about his lavish, eco-unfriendly lifestyle.

They didn’t do that after his Oscar speech. And they aren’t doing it during the “Don’t Look Up” media push.